NASA being a "dufus"? 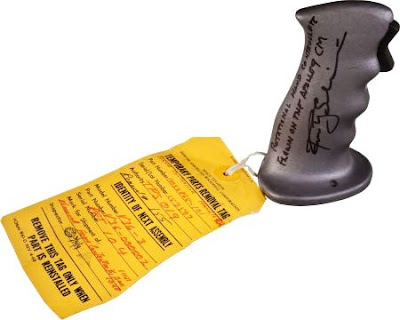 Apollo 9 Flown Command Module Rotational Hand Controller Directly from the Personal Collection of Mission Lunar Module Pilot Rusty Schweickart, Signed and Certified. An aluminum handle with a black "trigger" and indented finger grips, approximately 4.5" tall x 2.5" x 2.75" (at the base). Printed on the bottom are the numbers "10022865-101" and "SN 157507". This was mounted in the Apollo 9's Command Module Gumdrop and was used for manual control of the spacecraft across any of the three axes- pitch, roll, and yaw. It was removed after the successful mission and presented to LMP Rusty Schweickart who has written along one side: "Rotational Hand Controller/ Flown on the Apollo 9 CM/ Rusty Schweickart". Still attached with a metal clasp is the important yellow cardboard Rockwell "Temporary Parts Removal Tag," 2.75" x 5.75", partly printed and filled in by hand in red and black ink. The information presented on the tag is as follows: "Hand Controller Handle R.H./ Part Number 10022865-101/ Serial Number 157507/ Authority TPS 019/ Removal # 155/ Identity of Next Assembly/ Model Number V36-3/ Part Number V36-000002/ Serial Number PFT 104/ Mark for Shipment of: Removal From Controller S?N Bak 10028 1048/ Inspector 3/31/9 [between two inspector stamps]" An extremely rare, important, and desirable piece of flown Apollo hardware, seldom offered. Excellent condition.
Just why are these items being auctioned? Retired astronauts' money running out?
"NASA Says It's Working to Resolve Items' Ownership"byCurt AndersonJanuary 9th, 2012Associated Press
The head of NASA met Monday with former astronauts to discuss who owns space artifacts from moon shots and other missions, saying afterward that the agency will work cooperatively with them to resolve what's recently become a contentious issue.NASA chief Charles Bolden said in a statement that there have been "fundamental misunderstandings and unclear policies" regarding items that astronauts took home from the Mercury, Gemini, Apollo and Skylab programs. The statement marks a switch from NASA's recent confrontational stance, which included suing Apollo 14 astronaut Edgar Mitchell in Miami federal court over rights to a 16mm video camera that went to the moon."These are American heroes, fellow astronauts, and personal friends who have acted in good faith, and we have committed to work together to find the right policy and legal paths forward to address outstanding ownership questions," Bolden said.Mitchell and other astronauts have said NASA officials told them long ago they could keep certain equipment from the missions, and over the years collectors have paid millions for space items.Monday's meeting followed stories by The Associated Press and others last week on NASA raising questions about whether Apollo 13 commander James Lovell had the right to sell a 70-page checklist from Apollo 13, which received a bid at a November auction of more than $388,000. It is valuable because it contains Lovell's handwritten calculations considered key to navigating the crippled spacecraft back to Earth following an oxygen tank explosion.In a letter to Dallas-based Heritage Auctions, NASA also questioned the ownership of two items from Apollo 9 astronaut Rusty Schweickart — a lunar module identification plate and a hand controller — and a glove worn by Alan Shepard during training for Apollo 14. Those also received sizable bids in the November auction.Schweickart also attended the Monday meeting, according to NASA, along with fellow Apollo astronauts Gene Cernan and Charlie Duke.Bolden said the ownership discussions will explore "all policy, legislative and other legal means" to resolve ownership issues "and ensure that appropriate artifacts are preserved and available for display to the American people."An assistant said Monday that Lovell was traveling and wasn't immediately available to comment. The checklist and other items from the November auction are being kept in a Heritage Auctions vault pending outcome of the inquiry, company officials said.Mitchell and others have said they were given broad latitude in deciding which artifacts they could take home.Before he settled the camera lawsuit with NASA, Mitchell produced a 2002 letter from a former director at NASA's Johnson Space Center in Houston that appeared to back up their position. That letter, signed by retired director Christopher Kraft Jr., said that he approved a policy allowing Apollo astronauts to keep personal items that flew with them as well anything from the lunar landing module that was abandoned on the moon anyway."It was generally accepted that the astronauts could bring back pieces of equipment or hardware from this spacecraft for a keepsake of these journeys," Kraft wrote.That letter, however, does not address whether astronauts can sell the items. In its letter to the auction house, NASA insisted only the agency can approve such artifacts for sale. "Hold on", says NASA
Posted by Mercury at 5:04 AM