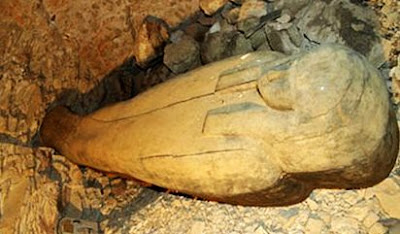 "Egyptian tomb holds singer Nehmes Bastet's remains"January 16TH, 2012 BBC NEWS
Archaeologists working in Egypt have discovered the tomb of a female singer in the Valley of the Kings.The tomb was found by a team from the University of Basel in Switzerland who came across it by chance.The woman, Nehmes Bastet, was a temple singer during Egypt's 22nd Dynasty (approximately 945 - 712BC), according to an inscription in the tomb.The coffin found in the tomb contains an intact mummy from almost 3,000 years ago.Professor Susanne Bickel of the University of Basel told the BBC that the coffin was opened on Monday and she was able to see the "nicely wrapped" mummy of the woman who was buried in the tomb.The opening of the coffin was carried out by Prof Bickel and her Basel colleague, field director Elina Paulin-Grothe, together with the Chief Inspector of Antiquities of Upper Egypt, Dr Mohammed el-Bialy and inspector Ali Reda.Prof Bickel said that the upper edge of the tomb was found on the first day of Egypt's revolution, on 25 January 2011. The opening was sealed with an iron cover and the discovery was kept quiet.Last week, after the start of this year's field season, the feature was identified as a tomb - and one of the very few tombs in the Valley of the Kings which have not been looted.Elina Paulin-Grothe said that the tomb was not built for the female singer, but was re-used for her 400 years after the original burial, according to AP.There are other non-royal tombs in the Valley of the Kings, Prof Bickel said, which mostly date from the 18th Dynasty (1500 - 1400BC).The woman in the coffin was the daughter of the high priest of Amon, Egypt's Antiquities Minister Mohammed Ibrahim told AFP.The discovery was important because "it shows that the Valley of the Kings was also used for the burial of ordinary individuals and priests of the 22nd Dynasty", he added.Contrary to the tune below she never worked with Sam the Sham and the Pharaohs.
Wooly Bully