Culpability in the lab 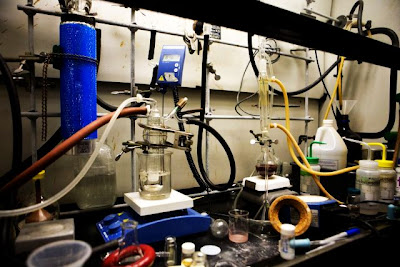 Who is culpable here? Looks like a "he said, she said" situation.
"Report faults professor, UCLA in death of lab assistant"Cal/OSHA says Sheri Sangji was not properly trained to handle the chemicals that killed her. The university criticizes the findings.by Kim ChristensenJanuary 21st, 2012Los Angeles Times
Ever since Sheri Sangji was fatally burned in a December 2008 lab fire, UCLA officials have cast it as a tragic accident, saying the 23-year-old staff research assistant was a seasoned chemist who was trained in the experiment that went awry.But Sangji was neither experienced nor well trained — if trained at all — in the safe handling of air-sensitive chemicals that burst into flame, ignited her clothing and spread severe burns over nearly half her body, according to a report on a Cal/OSHA criminal investigation obtained by The Times.The 95-page report adds new detail to the circumstances surrounding Sangji's death and provides insight into the basis for felony charges filed last month against UCLA chemistry professor Patrick Harran and the UC Board of Regents. Based on labor code violations, the charges are thought to be the first stemming from an academic lab accident in the United States.University officials have blasted the charges as "unwarranted," "outrageous" and "appalling" and say they contradict an earlier Cal/OSHA investigation that resulted in nearly $32,000 in Cal/OSHA fines but no findings of intentional, or "willful," violations.The findings of the subsequent criminal probe, conducted by a different investigator, were far harsher.The report states that UCLA, by repeatedly failing to address previous safety lapses, had "wholly neglected its legal obligations" to provide a safe environment in campus labs and that Harran was personally responsible."Dr. Harran simply disregarded the open and obvious dangers presented in this case and permitted Victim Sangji to work in a manner that knowingly caused her to be exposed to a serious and foreseeable risk of serious injury or death," the report by senior special investigator Brian Baudendistel states.If Harran had trained his research assistant properly and assured that she wore clothing appropriate for the work, "Sangji's death would have been prevented," it said.Harran's attorney, Thomas O'Brien, disputed those conclusions."Dr. Harran remains devastated by this tragic accident," he said. "There are numerous misstatements in that report, but I will refer you to the UC regents for any comments."Harran and the Board of Regents are to be arraigned Feb. 2 in Los Angeles Superior Court on three counts each of willfully violating occupational health and safety standards. Harran faces up to 41/2 years in prison if convicted; the regents could be fined up to $4.5 million.Kevin Reed, UCLA vice chancellor for legal affairs, said he "vehemently" disagreed with the findings. He said Sangji was well trained, had previously performed the experiment safely and successfully and chose not to use available protective gear."It was not as if UCLA found a newbie who didn't know what she was doing and put her in a lab with no regard to the consequences; there is just no evidence to support that," he said. "We didn't just pluck her off the streets and put her in a chemistry lab. She was a trained chemist."Sangji, who graduated in 2008 from Pomona College in Claremont with a bachelor's degree in chemistry, had worked in Harran's organic chemistry lab for less than three months when the accident occurred.She was transferring about 1.8 ounces of t-butyl lithium from one sealed container to another when a plastic syringe came apart in her hands, spewing a chemical compound that ignites when exposed to air. The synthetic sweater she wore caught fire and melted onto her skin. She died 18 days later.Sangji had not used pyrophorics in her undergraduate work or during a brief stint at an Azusa pharmaceutical company just before she took the UCLA job, according to the Cal/OSHA investigative report, which was completed in December 2009 but not previously made public. Nor had she been properly trained in their handling by a senior researcher, as Harran said, according to the report.When interviewed by Cal/OSHA, the researcher said he might have given Sangji some "general guidance" on the procedure but could not recall any formal training. The report also said the researcher's own methods were "contrary" to the chemical manufacturer's instructions and generally accepted lab standards."Despite Dr. Harran's assertions to the contrary, it is clear that Victim Sangji was not properly trained, if at all, in the procedures necessary for the safe handling and transfer of t-Butyllithium," the report noted.Since Sangji's death, UCLA has instituted more rigorous lab inspections, issued more fire-resistant lab coats, enhanced training in the use of air-sensitive chemicals and established a Center for Lab Safety.UCLA chem prof to plead "not guilty"
Posted by Mercury at 4:58 PM