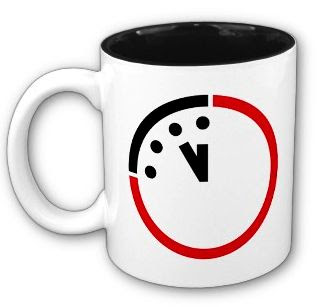 Their criteria is way too narrow. Consider: Bacterial and viral infections, a breaking point in economic inequality, race or ethnic conflict, or alien invasion.
"'Doomsday Clock' moved forward. What has scientists worried?"Scientists say they moved the 'Doomsday Clock' a minute closer to midnight because nations are failing to sufficiently address nuclear proliferation, climate change, and other global threats.by Mark ClaytonJanuary 11th, 2012 The Christian Science Monitor
Citing “inaction” on renewed nuclear proliferation, climate change, and the urgent need to find sustainable sources of energy, a group of scientists has moved the “Doomsday Clock” a minute closer to midnight, saying nations are “failing to change business as usual.”It was a back-to-the-future moment for the “Doomsday Clock,” which just two years ago had been shifted backward to indicate global catastrophe was a bit less imminent.Directors of the Bulletin of the Atomic Scientist, a group originally composed of University of Chicago scientists involved in the Manhattan Project, created the clock in 1947 to use the imagery of apocalypse (midnight) to convey the peril of nuclear weapons proliferation. Through the cold war it tolled, reminding nations of the silent danger.Over the years, the hands of the clock have moved around a lot. In 1949, the clock was moved to three minutes to midnight when President Harry Truman told the American public that the Soviets had tested their first nuclear device – starting the arms race. By 1991, with the cold war officially over and the US and Russia slashing their nuclear arsenals, the clock retreated to 17 minutes to midnight.Terrorism, tensions between nuclear-armed rivals India and Pakistan, renewed friction between the US and Russia, North Korea's nuclear push, and other tensions had pushed the clock to five minutes to midnight by 2007.But movement on nuclear arms talks, climate change, and other threats so buoyed the scientists two years ago that they ordered the so-called Doomsday Clock's minute hand to be pushed backward to six minutes before midnight.Now, despite the Arab Spring and other pro-democracy movements around the world, including in Russia, lowering clouds have rolled back in for these scientists. So much so that on Tuesday the BAS directors announced they were moving the minute hand of the clock back to the 2007 position – 11:55.“Two years ago, it appeared that world leaders might address the truly global threats that we face,” the BAS directors said in a statement. “In many cases, that trend has not continued or been reversed.”“Inaction on key issues including climate change, and rising international tensions motivate the movement of the clock,” the group said in its statement. “As we see it, the major challenge at the heart of humanity’s survival in the 21st century is how to meet energy needs for economic growth in developing and industrial countries without further damaging the climate, exposing people to loss of health and community, and without risking further spread of nuclear weapons.”But in a year in which the Mayan calendar and other doomsday prophesies are getting more than their share of attention, how seriously, really should the public take this obviously subjective – and critics might argue meaningless – relic of the cold war?“Is this ridiculous thing still around?” Darrin Cothran, a commenter on a Los Angeles Times web page noting the clock's shift moaned. “Time to tell these elderly gentlemen that it's time to retire.”“They're just trying to stay relevant,” piped up an anonymous commentator on Slashdot. “We all forgot about them when the Cold War ended, and they crave attention again.”Others, however, argue in favor of at least some type of global warning clock – as a simple indicator for society that unseen looming problems exist and need public attention.Daniel Abbasi, a former senior adviser at the Environmental Protection Agency, has argued that the world needs a Global Climate Change Index akin to the Dow Jones Industrial Average to chart humanity's gains – and reversals. It needs to be simple enough to keep public eyes from glazing over and still hold policymakers’ feet to the fire on really lowering greenhouse gas levels in the atmosphere.Bulletin scientists argue that the need for their clock remains strong. Key recommendations for a safer world that they say have not been taken up include:• Ratification by the US and China of the Comprehensive Test Ban Treaty• Implementing multinational management of the civilian nuclear energy fuel cycle with strict standards for safety, security, and nonproliferation of nuclear weapons• Strengthening the International Atomic Energy Agency's capacity to oversee nuclear materials and technology development• Adopting climate change agreements to reduce carbon dioxide emissions• Transforming the coal power sector of the world economy to retire older plants and require new plants to capture and store carbon dioxide they produce• Increasing public and private investments in alternatives to carbon-emitting energy sources, such as solar and wind, and technologies for energy storage“Whether meeting the challenges of nuclear power, or mitigating the suffering from human-caused global warming, or preventing catastrophic nuclear conflict in a volatile world, the power of people is essential,” Kennette Benedict, executive director of the Bulletin of the Atomic Scientists, said in a statement.“For this reason, we ask other scientists and experts to join us in engaging ordinary citizens,” she said. “Together, we can present the most significant questions to policymakers and industry leaders. Most importantly, we can demand answers and action.”
Posted by Mercury at 9:42 AM