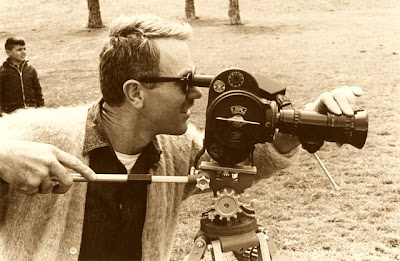 Robert NelsonMarch 1st, 1930 to January 9th, 2012"Robert Nelson, Experimental Filmmaker, Dies at 81"byBruce WeberJanuary 21st, 2012The New York Times
Robert Nelson, whose sprightly, arch experimental films brought spontaneity, teasing and wit to the often deadly serious arena of avant-garde moviemaking, died on Jan. 9 at his home in Laytonville, Calif. He was 81.The cause was cancer, Mark Toscano, a film historian and a friend of Mr. Nelson’s, said.Mr. Nelson, who was trained as a painter and was active in the teeming San Francisco arts scene in the late 1950s and early ’60s, began making movies with other artists, including the painters William T. Wiley and William Allan, the San Francisco Mime Troupe and the composer Steve Reich.Confoundingly plotless but cleverly and energetically edited to render images in often poignant, often uproarious juxtaposition, Mr. Nelson’s movies are varied in tone and subject matter, but they all exhibit the subversive relish of a renegade, quirky wit.“Plastic Haircut” (1963) is a 15-minute film built around a mesmerizing, rapid-fire series of kooky visual images involving an actor in a wizard’s cap, brief clips of a nude woman, geometric shapes and several constructed objects, including a pyramid and a swinging eye.“Oh Dem Watermelons” (1965), Mr. Nelson’s most widely seen work, is a brazenly sardonic evisceration of racism that exploits its stereotypical symbol. Beginning with a long, silent shot of a watermelon lying in a field, atilt like a teed-up football, it goes on for nearly 11 minutes, showing watermelons being put to strange uses (including sporting and sexual ones), being gutted like a slain animal, and being splattered or otherwise destroyed in various ways, set to a repetitive Steve Reich score that made vivid use of the antebellum songwriting of Stephen Foster.Originally intended to be shown at the intermission of “A Minstrel Show, or Civil Rights in a Cracker Barrel,” a notorious production by the San Francisco Mime Troupe that exploded racial stereotypes by exaggerating them, the film became popular on its own as a stalwart entry at underground film festivals.“The Awful Backlash” (1967) was far more meditative. A 14-minute single-shot film, it depicts the hands of Mr. Allan, the painter and an avid fisherman, unsnarling a vexingly snarled fishing reel, evoking the virtue of patience.Other early work included “Grateful Dead” (1967 or 1968), a dizzying collage of imagery and music featuring the titular rock band, and “The Great Blondino” (1967), a dreamlike, imagistic film suggesting a narrative about Blondin, a 19th-century tightrope walker.“They were among the most popular underground films of the 1960s,” Mr. Toscano said. “They’re known for their humor, but they’re very well constructed. Bob built houses, he worked in construction, and he knew how to build films as well, yet he still managed to keep a feeling of spontaneity in his work.”Mr. Nelson was born in San Francisco in 1930 and studied painting at the San Francisco Art Institute (then known as the California School of Fine Arts) and Mills College. He had had a couple of local shows of his work by the time he turned to film, in which he was completely untrained; when he and his comrades began making movies, it was almost as a lark. “Plastic Haircut” was shot with a borrowed camera, and Mr. Nelson essentially taught himself how to make a film while making it.“I had 2,000 feet of film after we shot it, and it looked very poor — only because it was repetitious and long,” he said in “A Critical Cinema,” a series of interviews with independent filmmakers by Scott MacDonald. “I struggled with the footage for weeks. No matter what I did, it seemed boring. In desperation I started cutting the shots shorter and shorter, and when I saw the energy that put into the film, I had my first real revelation about cutting.”Mr. Nelson was married and divorced four times. His survivors include two sons, Steve and Miles, and a daughter, Oona.For many years Mr. Nelson taught filmmaking at the University of Wisconsin-Milwaukee. His later films included “Bleu Shut” (1970), organized around what seems to be a bizarre game show in which contestants try to guess the name of a boat simply by looking at its picture, and the two-part “Suite California Stops and Passes” (1976 and 1978), a kaleidoscopic portrait of California.“The artists I knew at that time felt pretty genuinely that if the process got too heavy or ponderous or worried, if you weren’t having a good time at least part of the time, something was wrong,” Mr. Nelson said about the groupthink that spawned his approach to filmmaking. “We were bent on having a good time.”Partial filmography...Special Warning [1998]Limitations [1988]Hamlet Act [1982]Deep Westurn [1974]Bleu Shut [1971]War is Hell [1968]The Awful Backlash [1967]Grateful Dead [1967]The Great Blondino [1967]Hot Leatherette [1967]The Off Handed Jape [1967]Penny Bright and Jimmy Witherspoon [1967]Confessions of a Black Mother Succuba [1965]Oh Dem Watermelons [1965]Plastic Haircut [1963]King Ubu [1963]
Oh Dem Watermelons 1965Bleu Shut 1971Part 1
Bleu Shut 1971Part 2
Bleu Shut 1971Part 3
Bleu Shut 1971Part 4