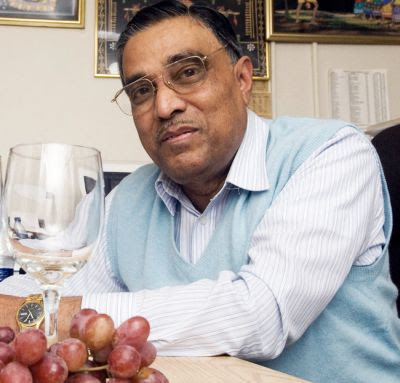 One wonders about the peer review process.
"University Suspects Fraud by a Researcher Who Studied Red Wine"byNicholas WadeJanuary 11th, 2012The New York Times
A charge of widespread scientific fraud, involving 26 articles published in 11 journals, was leveled by the University of Connecticut today against Dipak K. Das, one of its researchers, whose work reported health benefits in red wine.Many of the articles reported positive effects from resveratrol, an ingredient of red wine thought to promote longevity in laboratory animals.The charges, if verified, seem unlikely to affect the field of resveratrol research itself, because Dr. Das’s work was peripheral to its central principles, several of which are in contention. “Today I had to look up who he is. His papers are mostly in specialty journals,” said David Sinclair, a leading resveratrol expert at the Harvard Medical School.The significance of the case seems more to reflect on the general system of apportioning research money. Researchers complain that federal grants are increasingly hard to get, even for high-quality research, yet money seemed to have flowed freely to Dr. Das, who was generating research of low visibility and apparently low quality. The University of Connecticut said Wednesday that it was returning two new grants to Dr. Das, worth a total of $890,000, to the federal government.The agency that granted the funds was the National Heart, Lung and Blood Institute. Renate Myles, a spokeswoman, said in response that scientific misconduct “can go undetected for a length of time even under the most rigorous systems of research oversight and review.”The investigation of Dr. Das’s work began in January 2009, two weeks after the university received an anonymous allegation about research irregularities in his laboratory. A special review board headed by Dr. Kent Morest of the University of Connecticut has now produced a 60,000-page report, which has been forwarded to the Office of Research Integrity, a federal agency that investigates fraud by researchers who receive government grants.According to a 60-page summary of the report, Dr. Das’s published research articles were found to contain 145 instances of fabrication and falsification of data. Many involved cutting and pasting photographic images from a type of research record known as a western blot. Because western blots have often been subject to manipulations in the past, many journals require that the images not be altered in any way without an explicit description of the procedure.Dr. Das did not answer his phone at the university or respond to e-mail.The university has sent a copy of its report to the editors of the 11 journals that published the suspect articles.Adam Marcus, who edits the blog Retraction Watch, an inventory of the growing number of discredited scientific reports, said he would be monitoring the journals to see whether retractions were issued, a step that some editors are reluctant to take.Dr. Das was a prolific publisher of research. His name appears on 588 articles listed in Google Scholar, though some may be by other researchers with the same name and initials. Most of the articles concern the effect of drugs on the heart, including 117 articles on resveratrol.
Posted by Mercury at 8:58 AM