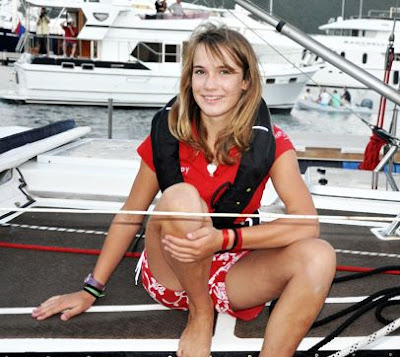 "Teen ends globe-circling voyage in St. Maarten"January 21st, 2011USA TODAY
Laura Dekker set a steady foot aboard a dock in St. Maarten on Saturday, ending a yearlong voyage aboard a sailboat named "Guppy" that apparently made her the youngest person ever to sail alone around the globe, though her trip was interrupted at several points.Dozens of people jumped and cheered as Decker waved, wept and then walked across the dock accompanied by her mother, father, sister and grandparents, who had greeted her at sea earlier.Dekker arrived in St. Maarten after struggling against high seas and heavy winds on a final leg from Cape Town, South Africa,Dekker claims she is the youngest sailor to complete a round-the-world voyage, but Guinness World Records and the World Sailing Speed Record Council did not verify the claim, saying they no longer recognize records for youngest sailors to discourage dangerous attempts.Dutch authorities tried to block Dekker's trip, arguing she was too young to risk her life, while school officials complained she should be in a classroom.Dekker said she was born aboard a yacht off the coast of New Zealand and said she first sailed solo at 6 years old. At 10, she said, she began dreaming about crossing the globe. She celebrated her 16th birthday during the trip, eating doughnuts for breakfast after spending time at port with her father and friends the night before.The teenager covered more than 27,000 nautical miles on a trip with stops that sound like a skim through a travel magazine: the Canary Islands, Panama, the Galapagos Islands, Tonga, Fiji, Bora Bora, Australia, South Africa and now, St. Maarten, from which she set out on Jan. 20, 2011."Her story is just amazing," said one of Dekker's fans, 10-year-old Jody Bell of Connecticut. "I can't imagine someone her age going out on sea all by herself."Bell was in St. Maarten on a work trip with her mother, Deena Merlen, an attorney in Manhattan, who wanted to see Dekker complete her journey. The two wore T-shirts that read: "Guppy rocks my world.""My daughter and I have been following Laura's story, and we think it's amazing and inspiring," Merlen said.Unlike other young sailors who recently crossed the globe, Dekker repeatedly anchored at ports along the way to sleep, study and repair her 38-foot (11.5-meter) sailboat.During her trip, she went surfing, scuba diving, cliff diving and discovered a new hobby: playing the flute, which she said in her weblog was easier to play than a guitar in bad weather.Dekker also complained about custom clearings, boat inspections, ripped sails, heavy squalls, a wet and salty bed, a near-collision with two cargo ships and the presence of some persistent stowaways: cockroaches.Highlights of her trip include 47 days of sailing the Indian Ocean, which left her with unsteady legs when she docked in Durban, South Africa, where she walked up and down the pier several times for practice.Dekker launched her trip two months after Abby Sunderland, a 16-year-old U.S. sailor, was rescued in the middle of the Indian Ocean during a similar attempt. Jessica Watson of Australia completed a 210-day solo voyage at age 16, a few months older than Dekker.Dekker has said she plans to move there after her voyage, but it is unclear is she still plans to do so.The auspicious voyage has begun--Laura Dekker has set sailLaura Dekker updateLaura Dekker...why not?
Posted by Mercury at 5:37 AM