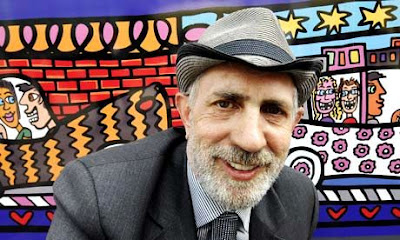 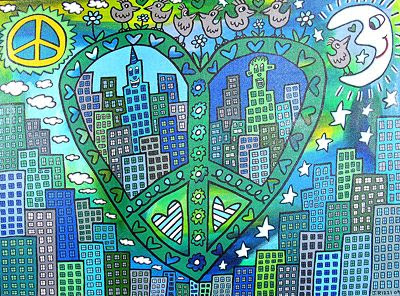 "American pop artist known for his childlike style and zany images"
byChristopher MastersDecember 29th, 2011 The Guardian
The American pop artist James Rizzi, who has died aged 61 after suffering from a heart condition, was no creative trailblazer, but he achieved renown for his linear, childlike style, vibrant colours and zany imagery. His work was described by the critic Glenn O'Brien as a cross between Picasso and Hanna-Barbera, combined with an evocation of Native American friezes. Rizzi himself listed his idols as Paul Klee, Jean Dubuffet, Keith Haring, Andy Warhol and Bugs Bunny.He was born into a family with Irish and Italian roots in Brooklyn, New York. After attending Holy Innocents grammar school and Erasmus high school there, he entered an archetypal hippy period in the late 1960s before winding up first at Miami Dade College and then at the University of Florida in the early 70s. He initially pursued art as a subsidiary subject before taking it as his major. He fulfilled the course requirement of producing work in three media by developing one of his trademark techniques, which involved making a silkscreen print, hand-colouring it and then attaching cuttings from a second sheet with adhesive foam. The resulting reliefs deftly combined graphic art, painting and sculpture.In 1975 Rizzi settled in Sullivan Street in Soho, the district of Manhattan where he was to spend the rest of his life. He began to participate in outdoor art shows in Brooklyn Heights and Washington Square, and sold pictures outside the Museum of Modern Art and the Metropolitan Museum. In the same period he created a 45m mural at Eric's Bar and Grill in New York, although it was demolished along with the building in 1985.Rizzi's reputation was established by his small-scale graphic work. This appeared almost simultaneously in the bosoms of both the art establishment and the counterculture, as he exhibited work at the Brooklyn Museum in 1976 and designed an album sleeve and animated videos for the new wave band Tom Tom Club in the early 80s. He developed his talent for the eye-catching, the quirky and sometimes the downright facile, notably for corporations in Japan. There, Rizzi worked with considerable success on television films, puzzle designs, restaurant menus, a whisky company calendar and the cover of a dictionary.In 1996 he achieved his most high-profile job, as official artist for the Olympic Games in Atlanta, Georgia. He created a series of paintings of the opening ceremony that are now in the Olympic Museum in Lausanne, Switzerland. The "Olympic spirit" and Rizzi's art were a perfect match.A striking monograph, The New York Paintings (1996), revealed Rizzi's passion for his native city. The lurid, anthropomorphic buildings that populate such works as Living Near the Water may not look much like Manhattan skyscrapers, but the UFOs and outlandish sea creatures give the picture a powerful mythical dimension. The frenetic crowds exemplify Rizzi's love of dense, teeming detail, while Crazy New York People and Cupid Does NYC make Sex and the City seem positively suburban. New York may have been Rizzi's principal inspiration but it was Germany that provided his most continuous employment, ranging from the making of teddy bears and a boxer's robe to the dome of a shopping mall in Oberhausen in the Ruhr and the Happy Rizzi House, a psychedelic office block, in Braunschweig, Lower Saxony. He also adorned the bodywork of three cars in order to promote the Volkswagen Beetle in 1999, having designed three years earlier the exterior livery of a Boeing 757. Rizzi's spirited departure from the conventions of airline logos anticipated British Airways' rebranding a little later, and was rather more successful.He was also commissioned to create a series of German postage stamps, though a more substantial achievement was his retrospective exhibition in 2008 in Mainz, in the Rhineland-Palatinate, which contained more than 1,000 works and had 50 times as many visitors. He was also honoured by having a school named after him in the Ruhr city of Duisburg.Rizzi was an ebullient figure, highly sociable and a lover of basketball and golf, who frequently worked for children's and Aids charities. He was divorced from the fashion designer Gaby Hamill and is survived by his mother, a sister and a brother. James Rizzi [Wikipedia]
Posted by Mercury at 4:40 AM