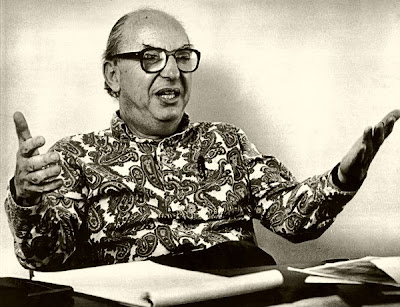 James ArnoldMay 5th, 1923 to January 6th, 2012"James Arnold dies at 88; pushed to unlock secrets in moon rocks"Nuclear chemist James Arnold, whose efforts helped lead NASA to preserve and analyze a treasure trove for lunar research, also founded UC San Diego's chemistry department.by Elaine WooJanuary 22nd, 2012Los Angeles Times
When President John F. Kennedy announced in 1961 that America was committed to "landing a man on the moon and returning him safely to the Earth" by the end of the decade, winning the race became the paramount objective of the national space program.But UC San Diego nuclear chemist James R. Arnold played a crucial role in drawing official attention to another goal: preserving and studying the soil and rock samples that Apollo astronauts would bring back with them.Arnold, 88, who died Jan. 6 in La Jolla from complications of Alzheimer's disease, was a member of a group of four scientists — dubbed the Four Horsemen by colleagues — who sounded the alarms that led NASA to establish a program for analyzing what proved to be a treasure trove for lunar research.Along with fellow scientists Paul Gast, Bob Walker and Gerald Wasserburg, Arnold recognized that the moon rocks were "not just souvenirs but the subject of important scientific investigation," Wasserburg, a Caltech emeritus professor of geology and geophysics, said last week. "He was a sound and resolute fighter on behalf of doing science."The precious specimens — more than 800 pounds were retrieved between 1969 and 1973 — yielded clues to many of science's most important questions, including the age and composition of Earth's closest celestial neighbor and the history of the sun."They are a major source of information about how things happen in the solar system," said Caltech geochemistry professor Donald S. Burnett, who was also involved in the early efforts to safeguard the moon rocks. He said the efforts of Arnold and his colleagues more than 40 years ago have left a rich legacy, including the discovery of water in moon rocks in 2008."Every few years some breakthrough is possible because these rocks are available to science," Burnett said.For Arnold, who grew up on the science fiction of Jules Verne and idolized Buck Rogers, unlocking the secrets within the lunar materials was essential.The problems they could solve, he told The Times in 1989, include "how to understand why our solar system got here, and ultimately perhaps whether our sun and planets are typical of the stars we see at night, or whether we are rare, or whether we are alone."The son of a lawyer and archaeologist, Arnold was born in Metuchen, N.J., on May 5, 1923. At 16, he entered Princeton University, where he earned his bachelor's, master's and doctoral degrees in chemistry. His 1946 doctorate was awarded for his work on the Manhattan Project, the military program that produced the atomic bomb and stirred the fears of nuclear fallout that led him to join the Union of Concerned Scientists.After earning his doctorate, he helped University of Chicago chemist Willard Libby develop radiocarbon dating in 1949. The process, which enabled archaeologists and paleontologists to estimate the age of long-dead specimens, later earned Libby a Nobel Prize.In 1955, Arnold joined the faculty at Princeton, where he expanded his investigations into the effects on meteorites of cosmic rays, the high-energy particles that speed through space. His work produced a method for recording the age of rocks, which helped scientists understand "how long a meteorite has been a rock in space and where it might have come from," Arnold once explained.His research on cosmic rays drew him to the young UC San Diego, where he founded the chemistry department in 1960. He became a consultant to NASA, which in 1970 gave him its top medal for "exceptional scientific achievement." In 1980, two colleagues named an asteroid after him, after he created a computer model describing how meteorites traverse the asteroid belt between Mars and Jupiter.He held UC San Diego's Harold Urey Chair in chemistry from 1983 until his retirement in 1993.In Arnold's last decades, he advocated the colonization of space.It was, Wasserburg said, "an obsession he had. We would fight about it. I thought it was nonsense. But he pressed hard to search for water on the moon, which was a cause for subsequent NASA missions. They found some water. He always worried that you have to have water if you go there."Arnold's survivors include his wife, Louise, and three sons.
Posted by Mercury at 5:52 AM