Reverence or a clever enterprise?...human ashes into beads 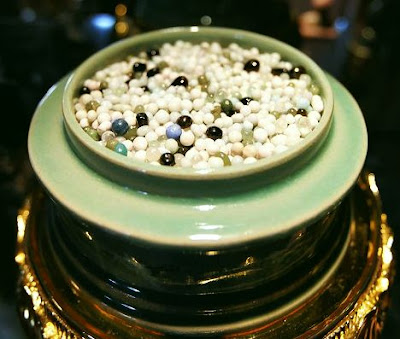 "South Korea firm turns human ashes into beads"South Koreans who dread the idea of keeping relatives' ashes in urns can opt to have the remains turned into gem-like beads and placed in a dish.by Jung-yoon ChoiJanuary 21st, 2012Los Angeles Times
When Jeon Gyeong-suk lost her husband to cancer three months ago, she agonized over how to keep his remains.Because land is at a premium, burial was out, and she found the idea of a heap of ashes stored in an urn sort of creepy. So the 51-year-old widow paid $900 to transform her husband's ashes into a few handfuls of tiny bluish beads that have the look of beluga caviar.Even though the beads look like pebble-sized gems, they aren't meant to be strung into a necklace. Instead, some mourners keep them in dishes and glass containers, the point being to keep a lost loved one close by."I miss my husband so much," said Jeon, who buried his beads in her front yard.For Jeon and others here, the image of ashes-to-ashes, dust-to-dust just seems like unfinished burial business. Death beads, they say, are a thing of beauty. But the beads are not without their critics, who insist that they dishonor the dead by needlessly manipulating human remains.Bae Jae-yul, founder and CEO of the "death bead" firm Bonhyang, says he's served more than 1,000 customers in 10 years. He remembers one client who didn't want to burden his children with overseeing the tomb where their grandparents were kept. So he razed the grave and created a group of beads with the mixed remains of both parents. Now the beads are kept at home, where they're accessible to the whole family.Bae, 56, and his business-partner wife, Hong Yang-ja, say the work has changed their outlook on death."The name of the company itself means 'returning to one's homeland,'" he said. "Death is not something that one should be fearful of or dread. It's a natural process."In Confucian South Korea, paying regular respects at the grave site of elders was for generations the preferred practice. But by the late 1990s, when the nation acknowledged its shortage of buildable land, cremation slowly became more popular.Nearly 70% of those who died in 2010 were cremated, nearly twice the percentage only a decade before, according to government statistics. Whereas some South Koreans bury the ashes, most store them in mausoleums.Death beads, Bae says, were just the next step, with the unique process receiving government approval in 2000. A few competitors also cropped up.Bae got into the ashes-to-beads business by accident. The former real estate and construction businessman was looking for a use for a patch of rural land he owned outside Seoul. As he considered establishing a crematorium, he met some people interested in exploring the burial bead business."They had the idea but didn't have capital for R&D," he said.Bae quickly got involved. "My father ran a machine construction company, so I had knowledge of the basics of machines. I wanted to challenge myself and make a bead-making machine."After years of trial and error, he developed a mechanism to make the death beads. At first he couldn't attract customers, but slowly the idea caught on."They're very beautiful to look at," said Bae, running a few samples through his fingers. "You don't feel that these beads are creepy or scary. In fact, there's a holiness and warmth to them."The ashes-to-beads process takes about two hours. In a corner of a massive room in an industrial area an hour outside Seoul, Bae keeps an altar to hold rites for the dead. He often leads the rites with family members present."This is an important process, because I am announcing that I will take good care of the deceased and handle it with utmost care," he said.The ashes are ground inside a special machine into a finer powder, which is reheated and shaped into beads. "The color and density of the beads vary from person to person," Bae said, adding that the finished colors range from coral and topaz to gray and black.Jeon Gyeong-suk is one of Bae's happy customers. Recently, she called him to express her appreciation for the beads. "I was so moved by how beautiful they were," she said. "The pearly blue color calmed me."
Posted by Mercury at 5:45 AM