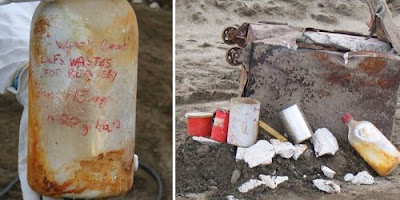 An early sample of plutonium was found in a jug inside a safe during a cleanup at the Hanford site.
Quite a surprise find during cleanup at the defunct Hanford, Washington nuclear production facility.

Chemical & Engineering News
One of the oldest known samples of plutonium has been dug up from a waste trench in Hanford, Wash., near the now-decommissioned nuclear production site along the Columbia River. During the process of figuring out the plutonium's origin and history, a new technique emerged that may help nuclear scientists identify the age and source of trafficked nuclear material.

The sample hails from one of the first attempts to produce weapons-grade plutonium during the Manhattan Project era, says Jon M. Schwantes, a nuclear chemist at the nearby Pacific Northwest National Laboratory.

Cleanup workers found the half-gram sample of weapons-grade plutonium-239 in a glass jug located in a rusty safe dug up during the Hanford site's environmental rehabilitation.

The oldest sample of purified plutonium is housed at the Smithsonian Institution, in Washington, D.C. It was made in 1940 by Glenn Seaborg and Art Wahl at the University of California, Berkeley.

To make weapons-grade plutonium, nuclear scientists convert uranium to Pu-239 in a nuclear reactor, using a "slow burn" process that prevents too much accumulation of unusable isotopes of plutonium. Then they chemically separate the Pu-239 from the rest of the nuclear waste.

After spelunking through historical documents, Schwantes and his team believe the jug was stored in the safe at Hanford, but after a radioactivity leak, both jug and safe were thrown into the waste trench, only to be discovered 60 years later.

This is "a solid piece of nuclear archaeology," says Maria Wallenius, who works in nuclear forensics at the European Commission's Institute for Transuranium Elements, in Karlsruhe, Germany. During the study of the lanthanum fluoride found in the jug with the Pu-239, Schwantes and coworkers developed a new and "ingenious" way of dating radioactive sodium produced from radioactive fluoride to provide historical information about the sample, Wallenius says. She notes that this new technique could be useful in forensic investigations to identify the source and age of trafficked nuclear material.
Posted by Mercury at 9:07 AM