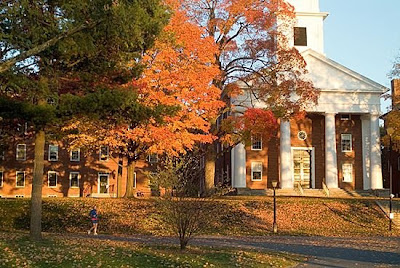 Under the Microscope
Open any newspaper these days, and you'll likely find statistics breaking down how many women are entering the sciences or dropping out of the sciences. You can compare the numbers to those of the last year, the last decade, and the last century, but you can't grab a cup of coffee with a number.

As part of UnderTheMicroscope.com's mission to put faces, so to speak, to the stats and to ask real women for their two cents' worth on science, I recently conducted a virtual panel discussion with three women from one of the top liberal arts colleges in the country, Amherst College.

Maureen: A Chemistry major from L.A. who loves puzzles: "Crosswords, Sudoku, jigsaws, you name it." Since starting college, she has been on the crew, rugby, and equestrian teams.

Samantha: An Environmental Studies major from Pennsylvania who, besides working as a science T.A. and a Writing Tutor, plays in her Amherst music ensembles. A recent college science class highlight for her was learning how to make nylon in her Organic Chemistry class.

Wen: A Psychology major and pre-Med student interested in human rights. Of her international background, she says, "I like to say that I was born in China, raised in Canada, and educated in the U.S."


And now, on to my discussion with Maureen, Samantha, and Wen:

UTM: There has been much discussion and speculation about the disparity between men and women working in the sciences and the obstacles women face. Is this something that you are concerned about? Where do you think this disparity comes from?

Maureen: I don't consciously think about the male-female disparity in the sciences. But it's definitely true that there are more men currently in the field. Women are making advances - the numbers of women interested and entering science-related careers are on the rise - but it's not enough. In physics, engineering, and other more "hard" sciences, the numbers of men greatly outnumber women. Since this is the case, I'm concerned that women may not be treated seriously. This disparity probably arises from the fact that men are assumed to be more analytical and fact-oriented, while women are assumed to be more emotional and interested in the humanities.

Samantha: I don't know that I'm particularly concerned about the obvious disparity between men and women in the sciences, which I think stems mostly from the fact that for so long women did not have access to the same educational opportunities as men. There was just this mindset that women couldn't do the work, and they faced a lot of social and psychological barriers. But now I think we're seeing more and more women enter scientific fields as we gain access to universities, and as math and science education are opened up more for younger students. A large percentage of my science professors are female, and I'm sure that even ten years ago it was much, much smaller, so I think that we're making progress. Once younger people have those positive role models, I think that they're much more motivated to follow in their footsteps...

Wen: I think this disparity is an almost ingrained notion. Men are good at science, while women are good at emotional/connection stuff. It's a stereotyped thing. I do have to admit, that I do agree that maybe in general, there's a trend like that, but stereotypes shouldn't stand in the way of a woman in the sciences. However, though we hear about a disparity in the numbers, I haven't necessarily experienced any "overt" form of discrimination because I'm a woman. Most times, I think guys are little jealous of women nowadays (or maybe that's just because of the fact that Massachusetts is a pretty liberal state overall, especially in [terms of its] colleges). They think that we get it easier because we're women, and everyone sympathizes with us - which is true to a degree. I think equality has to start with people NOT thinking that women need to be babied... For equality to really happen, people need to be equal across the board, regardless of gender.

Probably because of "historical" gender biases, people feel like they need to make it now. But I don't think that it should work that way. Admit that what you did before was wrong, and try to be equal and fair in everything now.

UTM: Throughout your high school and college career, have you felt the need to see more female role models in the sciences? Are there any women working in your field who have inspired you? If yes, please explain. If no, why not?

Samantha: In high school and college, I have had a good number of female role models in the sciences. My biology teacher in high school and a good number of my chemistry and math professors in college were female. My mom is a math teacher. So I knew that there were women in these areas, and these were women I definitely looked up to. I thought what they did was awesome, and I think that their positive influence, especially in this tutorial role, has largely impacted my desire to teach this material to others. Certainly, I feel like overall there is still a gender disparity, especially in the hard sciences, but I know that this is changing.

Wen: Oh definitely. I've often felt the need to see more female role models. But what can you do? I mean most of the science "greats" we read about all fall under the category of: white, male, and dead. However, even if you can't change history, you can still carry forward. I don't really have any "inspirations" period, actually. Nope, can't say that I do. I feel awed by ANYONE working in a science or medicine field just because of all the work attached, but no one in particular.

UTM: What kinds of challenges have you faced in relation to your interest in science? Have any of them been gender-related?

Maureen: No, and I hope it stays that way. In my high school, the numbers of girls in science classes always outnumbered the numbers of boys. My parents and teachers encouraged my interest in science without regard for my gender.

Samantha: The challenges I've faced I think have mostly been related to the atmosphere of my science education... I was always the only girl in my math and science classes, and I certainly felt that fact. I often felt isolated. And the teachers would always bring it up, in some way or another. Sure, I felt good that I was the only girl, I guess, but it made me angry that the boys would always be "better." I think that this had more to do with the sense that a lot of teachers throughout elementary, middle, and high school had, that boys were good at math and science, and a girl who was good at math and science was an anomaly. I always felt like I wasn't as good as the boys, and felt like I wasn't as smart as them and couldn't do the work as well as them, and really had to fight against the grain. I don't get that sense so much now, in college, which is encouraging.

Wen: Well I do think it's intimidating if you're walking into a class, and like most of the people there are males. For women especially, it makes us feel better if we have other girls around. Well or maybe that's just me. But being a room full of guys does give me the creeps. I mean, who would want to take a class like that?

UTM: What sort of community exists among students interested in the sciences in your college? Do you believe that community accurately reflects what you will have to face outside of college? What kinds of challenges do you think you will encounter, and what are you looking forward to?

Maureen: ...Those who come here and choose science are generally very excited about the subject matter. By senior year, it seem like most science majors know each other from having taken the same classes and attending departmental meetings together. The science community here is very willing to share their studies and interests. I'm sure that the environment here is more nurturing and less harsh than in the real world. But I think the science community, in general, will welcome interested new scientists.

Samantha: ...Even though I don't really perceive many gender inequalities in college, that's not the case in the world outside of school. No matter what people say, I still think that there is gender bias and sexual discrimination. There is still this patriarchal condescension against women in our society, as well as a negative reaction against feminism that just won't go away. I can't count the number of times that I've disagreed with people who think that gender discrimination is a problem just in other parts of the world, and that we have no right to complain about our experiences here in the U.S.

Wen: Our college is a pretty liberal and equality driven place. Women are definitely encouraged here for the most part... When I came here, I was definitely like, "Wow, the people here are so nice and incredibly non judgmental." I'm looking forward to telling men I may meet in my future workplace that I'm not their stereotypical woman. I'm loud, opinionated and pretty assertive when I want to get my point across. So don't expect me to just back down!

UTM: Do you have any advice for other young women who intend to pursue science in college?

Maureen: Don't be afraid to try out classes that you didn't enjoy or do so well in high school. Perhaps you had a bad teacher. Classes in college can be completely different from those in high school. You'll delve deeper into topics that were only skimmed over in high school, and you may find yourself really enjoying the material.

Samantha: Don't let anyone intimidate you. There are a lot of smart women and men out there who might make you feel like you're not good, smart, or fast enough. But you just have to persevere and keep working at it. If it doesn't come quickly to begin with, that's okay. For example, the first time I learned about Chemistry, I had the hardest time comprehending the concept of an atom. Now I help other students learn the material and run review sessions. It's immensely satisfying.

Wen: GO FOR IT! I want to read about "Ms. So-So" who discovered "Such and Such" and have it named after her. I mean honestly, all the units we have are named after men and all the discoveries have mostly been by men as well. GO FEMALES! WOOT!
Posted by Mercury at 4:49 PM