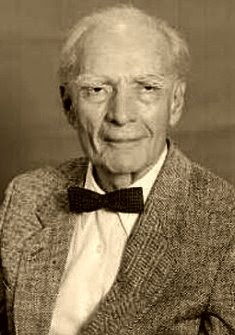 Los Angeles Times
Victor Vacquier Sr., a Scripps Institution of Oceanography geophysicist who developed key instruments for mapping the Earth's magnetic fields and whose research provided a strong experimental foundation for the now widely accepted theory of plate tectonics, died of pneumonia Jan. 11 in La Jolla. He was 101.

An academic rarity who became a full professor without ever earning a doctoral degree, Vacquier was a master of magnetics, developing key instruments for the military and then adapting them for use in research.

As an electrical engineer at Gulf Research Laboratories in the 1930s, Vacquier invented the flux magnetometer, a new tool for detecting magnetic fields.

With the outbreak of World War II, he went to the Airborne Instruments Laboratory at Columbia University to oversee testing of the device. Preliminary experiments showed that it could successfully identify a submerged submarine.

After that demonstration, he went to the Lighter-Than-Air Naval Headquarters in New Jersey, where the magnetometer was installed in an R3 blimp. The magnetometer worked, but the blimp didn't -- often failing to make headway or even moving backward relative to the ground because of winds. After 200 hours of airborne testing, Vacquier convinced the Navy that the device would work much better in a PBY Catalina flying boat.

From 1944 to 1953, he worked at Sperry Gyroscope Inc., where he developed the Mark 19 and Mark 23 gyrocompasses that became standard equipment on Navy ships for identifying true north.

He spent the next four years at the New Mexico Institute of Mining and Technology, where he developed a method to use electrical conductivity to search for ground water in arid regions.

Vacquier joined Scripps in 1957 to direct its geomagnetics program, in which magnetometers are towed behind ships to measure the magnetic fields imprinted on the sea floor.

His biggest discovery was the recognition that the distinctive magnetic pattern of the sea floor across a broad section of the Pacific Ocean was offset by 776 miles across a fracture zone. That finding proved to be a major factor in the rapid acceptance in the 1960s of the theory of plate tectonics, which says that major plates of the Earth's surface are moving with respect to each other.

In the 1960s, Vacquier took over the Scripps program for measuring heat flow through the sea floor. He found evidence of elevated heat flow at the crest of the Mid-Atlantic Range and the Central Indian Ridge. These discoveries provided experimental support for the idea of sea-floor spreading -- in which tectonic plates slowly separate, bringing molten rock, and heat, to the Earth's surface -- another aspect of plate tectonics.

Vacquier was born Oct. 13, 1907, in St. Petersburg, Russia. In 1920, after the Russian revolution, he and his family escaped to Helsinki, crossing the frozen Gulf of Finland in a one-horse sleigh. The family lived in France until he and his mother immigrated to the United States in 1923.

He earned a bachelor's degree in electrical engineering at the University of Wisconsin in 1927 and a master's degree in physics in 1929.

Vacquier had more than 50 publications and 18 patents, and received a number of major prizes for his inventions.

He is survived by his wife, Mihoko; a son, Victor D. Vacquier, a biologist at Scripps; four grandchildren; and four great-grandchildren.
Posted by Mercury at 7:50 AM