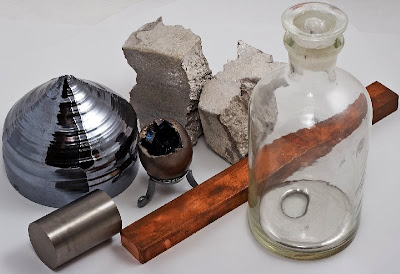 Never too old to have some fun with science toys.

Tim Rowett is an avid collector of science-related toys. Robert P Crease and son drop in to play with them.

physicsworld.com
"I have a low boredom threshold," Tim Rowett explains, ushering in my son Alex and me. Rowett is a jovial, professorish-looking man with wire-rimmed glasses and a short, white beard. Alex and I have gone to his flat in Twickenham, on the edge of London, to see his collection of fun stuff — jokes, games, puzzles and other toys related to science. When I ask what they have in common, Rowett has a ready, if not illuminating, answer: "They're just things that make people go 'Wow!'."

The how of the wow

During my visit, Rowett hands Alex a pair of inverse goggles, which turn your field of vision upside down. While my son gets to grips with those, I look round Rowett's small, three-room flat. At first glance, it seems like the lost-and-found corner of a 1950s airport. One room has metal racks stacked to the ceiling with old-fashioned, cloth-covered valises. Another has shelves crammed with books, with a jumble of other objects strewn across the mantelpiece, piano and other flat surfaces.

Many people collect toys of one kind or another, but Rowett is different on three counts. First, he has a lot — 18,000 toys in fact. Second, he has managed to eke a living out of them, entertaining children until his retirement in 1996, then selling toys over the Web [ Grand Illusions ]. Third, while most of us focus our fascination on a particular kind of amusement — magnetic toys, optical illusions or puzzles — Rowett is equally interested in each kind. He will discuss a simple toy made of clothes pegs — its inventor, variants and how these evolved over time — with the same passion that he discusses complex perceptual-trick devices made of arrays of lenses.

While Alex bumps about in his goggles, I manage to elicit some of Rowett's own story out of him as he shows me his toys. He was born in Farnham in 1941, and his father was in the Royal Signal Corps and then the clergy. Rowett studied engineering at King's College, London, but kept failing, eventually graduating in six rather than three years. "I was easily distracted," he shrugs. Rowett found short-lived employment as an engineer, followed by odd jobs ranging from selling central heating (nine months) to peddling encyclopedias (three days).

All along, he loved entertaining children as a hobby. But it took him a while to discover his talent: his magic tricks never met the demands of his audience, and he did not have the personality for puppets. One day in the early 1970s, he brought to a party a toy dog equipped with a simple electroacoustic switch. "When you called, it went waggle waggle waggle, walk walk walk," Rowett explains. "The kids were all over it. I had discovered that they don’t need high technology, they want things they can touch. That's how I started."

Alex, still wearing the inverse goggles, asks us to throw him a pen. He misses a few times and goes back to practising. Meanwhile, Rowett shows me his Klein bottle used to store fennel seeds; a baton-sized, battery-powered van de Graaff generator able to make a sheet of silver Mylar float; and a tiny Stirling engine: "Look at that — chug, chug, chug — it runs on the heat of your hand!"

We wander into the kitchen, which is another wonderland. It has pitchers that will not pour unless you know which holes to cover with your fingers, spoons that bend when inserted in hot liquid and a can of "primordial soup" from Fermilab ("Ingredients: quarks, force-carriers, electron-like particles, neutrinos, Higgs bosons…"). Rowett then shows me his latest acquisition: a few square inches of an extraordinary super-cushiony, sticky material. He drops an egg on it from a height of about two metres and it lands on the square without cracking or bouncing. "Astonishing!" Rowett says. When I ask him what it is good for, he gives me his usual answer: "For the ‘Wow!'."

Alex asks us to throw him something again, and this time he catches it. We applaud.

A few months later, Rowett and I meet again in a New York City café. He rattles off interesting optical effects that he has witnessed, including a balcony on 29th Street and 3rd Avenue that appears to slope upwards when viewed from uptown and downwards from downtown, and a place from which the Empire State Building looks like it is a rocket blasting off. Rowett has been scouring the stalls of toy fairs, and begins pulling his acquisitions out of a bag: a Japanese-made penlight that projects a star chart; a device that relies on the Bernoulli principle to make a rocket pop out of a box when you blow on it; and real Mexican jumping beans — which Rowett calls "nature’s best novelty" — the bizarre and unexpected movements of which are caused by newly hatched caterpillars.

The last items in his bag are plastic straws. Rowett pinches each end of one with his fingers and winds it up like a crank until it bulges. "Flick it with your finger," he commands. I do, and it bursts with a bang. Startled coffee-drinkers look us over warily. "Adiabatic compression," Rowett explains to anyone caring to listen. "It heats the wall of the straw, weakening it, so all it takes is your finger to make the trapped air pop it. I had a physics professor in Munich explain it all to me!"

Suddenly I know how to describe Rowett's things. They each have a hidden order that, however familiar, shows itself in an unexpected and apparently magical way. His toys allow us to appreciate the order, and the magic too.

[Robert P Crease is chairman of the Department of Philosophy, Stony Brook University, and historian at the Brookhaven National Laboratory, US.]