Tyson's interview with "Time" on Pluto and planets 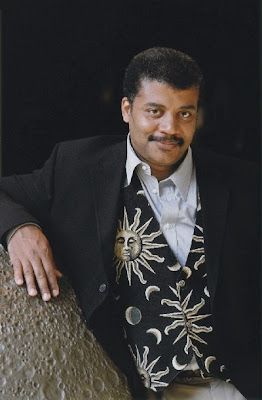 Neil deGrasse Tyson replies to Time questions regarding Pluto, planets, and his book The Pluto Files.

Time
Once a planet, now a dwarf, Pluto has lodged itself in the American consciousness for three-quarters of a century. Astrophysicist Neil deGrasse Tyson, director of New York City's Hayden Planetarium, explores the little guy's allure in his new book The Pluto Files. He talked to TIME about demoting a planet, how he became one of America's best-known scientists and how science will fare in the Obama Administration.

Why in the world do Pluto-philes, which you make a pun on in your book title, even exist? What's so special about Pluto?

All Plutophiles are based in America. If you go to other countries, they have much less an attachment to either the existence or preservation of Pluto as a planet. Once you investigate that, you find out that Disney's dog Pluto was sketched the same year the cosmic object was discovered. And Pluto was discovered by an American. So here you have a recipe for Americans falling in love with a planet that really is just a tiny ice ball.

How did it get to be a planet in the first place?

There were high expectations that there was a planet of commensurate mass and size to Uranus and Neptune, orbiting behind Neptune. Scientists saw the path of Neptune around the sun, and they saw that it wasn't quite following Newton's laws of gravity. And so either Newton was wrong — though he'd been right for hundreds of years, so why assume that — or there was some other mass out there that they hadn't catalogued yet that was influencing the motion of Neptune. So that was the famous Planet X. And eventually, Clyde Tombaugh in Arizona discovered a planet, which got named Pluto. Not by an American, though, because an American would never have named it after a highly advertised, highly marketed laxative of the same name that was popular then.

So when did we figure out that Pluto is actually pretty miniscule?

What you do is, you look at the sky chart of stars and find the day when Pluto moves to intersect the light of a star. You set up observers across the earth and you each get a different angle of view of Pluto intersecting the light of a star. And when you do this, you can actually map the size of an object in the solar system. Here's what happened. They said, "OK, here's a star that's going to get really close, and Pluto is surely going to blot out the light of the star." Nope. The star just went right on by untouched. "Well, here's a closer passing one." Nothing. So for every star whose light was not blocked out, Pluto got smaller and smaller and smaller. People started getting suspicious in the 1970s and started thinking of it not as the ninth planet, but as one of the vagabonds of the solar system. It was smaller than Earth's moon. There are seven moons in the solar system bigger than Pluto. That doesn't bode well if you're trying to hang out in the ranks of planets.

You and your planetarium played a part in setting off this controversy. How did that come about?

We rebuilt the Hayden Planetarium between 1997 and 2000 at great expense. There was new science that needed to go in the facility and you want the most reliable, longest shelf-life science you can come up with. So I called in a panel of experts on the status of Pluto. And by the end of the night, it was clear that Pluto's day was over and it was time to rethink the structure and the form of the outer solar system. Our exhibit was that way for a year, and nobody complained about it until it showed up in the New York Times, page one: "PLUTO'S NOT A PLANET? ONLY IN NEW YORK." That's when all hell broke loose and the hate mail started.

So, how much hate mail did you get?

Let me be a little more honest in the word choice there. People felt very strongly and chose sides, and most of the hate mail was in fun.

There wasn't any, "Stop talking smack about Pluto or I'm going to slash your tires"?

There were no threats of bodily harm. But there were tongue in cheek threats. And most of the schoolchildren were clearly disgruntled, pleading with me to put Pluto back where it belongs, as a planet.

What, then, is the criteria for a planet?

In our exhibits, we abandoned the word planet as a useful word completely. We don't organize by planet status. We organize by what objects look like compared to what other objects look like. So we look at the family photo of the solar system, and in it, you have the sun, which obviously is its own thing. Then you have the terrestrials — Mercury, Venus, Earth and Mars, all small, all rocky, all dense. Then you have the asteroid belt — craggy chunks of rock and metal — orbiting between Mars and Jupiter. Tens of thousands of them, likely hundreds of thousands of them. Then you have Jupiter, Saturn, Uranus and Neptune. They're all big, all bulbous, all gaseous, they have rings, they all have many moons. That's a group of objects.

So when people say, "How many planets are there now?" I say, that's the wrong question. Do not distract yourself over the answer to that question because that question contains no science. Now I am partly to blame, as an educator, because to third graders you teach the planets in sequence, and books celebrate this, and kids boast about memorizing planet names, thinking that they've accomplished something. But it would be much more effective intellectually if you tell me what Mercury, Venus, Earth and Mars have in common. Or why they are different. That's a much more useful scientific inquiry than the recitation of planets in sequence.


"The Pluto Files" by Neil deGrasse Tyson
Posted by Mercury at 4:45 AM

Tyson is wrong when he says "Plutophiles" are only Americans. I have heard from and read writings by people from all over the world who want to see Pluto reinstated as a bona fide planet, not a dwarf, people from Australia, England, Canada, New Zealand, Egypt, the Philippines, Morocco, India, Pakistan, and many other locations.

There are Internet groups and web sites all over the world organized by people who want to see Pluto reinstated as well as see dwarf planets categorized as a subclass of planets. There are astronomers worldwide, some of whom are IAU members, others who are not, who reject the IAU demotion of Pluto. Some of them were at the Great Planet Debate. One can see names from around the world in Dr. Stern's petition of 300 professional astronomers who rejected the IAU decision, which can be found here: http://www.ipetitions.com/petition/planetprotest/

Tyson also overly emphasizeds the connection with the Disney dog, to which he attributes much of the public's fascination with Pluto. This is quite a supposition and assumes he knows the motivation of people who want to see Pluto's planet status reinstated. What he does not take into account is that many "Plutophiles" are amateur astronomers and astronomy enthusiasts (both adults and children) whose interest in Pluto the planet is completely independent of Disney.

In his presentations, Tyson frequently comments on Pluto having an elliptical orbit, claiming “that is no way for a planet to behave,” arguing that such an orbit is more typical of comets. Does he ever consider that maybe planets have a much wider range of behavior styles than he or anyone else has previously thought? Many of the giant exoplanets we have found, most of which are significantly larger than Jupiter, have very elliptical orbits. Does that make them comets instead of planets?

Tyson also likes to argue that if it were placed closer to the sun, Pluto would grow a tail like a comet. That is true, but it is only half the story. Any planet brought close enough to the sun (or to its parent star), including Earth and even Jupiter, would grow a tail due to sublimation and outgassing.

If we are to group objects with those like one another, Pluto cannot be grouped solely with other Kuiper Belt Objects just as Ceres cannot be grouped solely with other bodies in the asteroid belt. To do this is to ignore the fundamental characteristic of hydrostatic equilibrium, that is, of being spherical and therefore geologically differentiated.

In summary, Pluto has not "fallen." This debate is far from over.