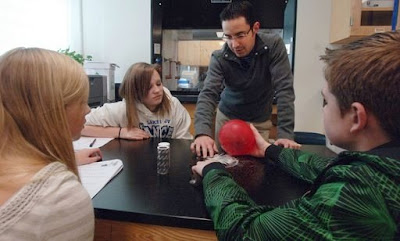 Humm, maybe this will catch on...but, it does require other fundamental skills of mathematics, philosophy [critical thinking] and communication.

Daily Herald
Traditionally, high schools teach taught biology first, then chemistry and finally physics. But Community High School District 117 has flipped the sequence by implementing the "Physics First" curriculum at both Antioch and Lakes Community high schools. And now, at the halfway point of the first year, teachers say they are excited about the program.

"This is a mindset change," said Lakes Principal Jim McKay. "It is a fundamentally different way of teaching science. It lays a better foundation for the study of chemistry and biology than the traditional model."

The idea was sparked when McKay was heading up the science department at Antioch High School a number of years ago. McKay was troubled by the number of students turning their back on science courses in their junior and senior years. After completing the required biology and chemistry courses, many were reluctant to move on to physics. He had heard success stories about schools who chose to reverse the sequence, and worked to implement the program in the district. There was a five-year pilot plan before it was launched this year.

Proponents of the switch say starting with a very hands-on science like physics makes more sense.

"Think of how kids interact at museums," said Lakes science department head David Bain. "They touch and experience first and the learning comes naturally from there. We've spent too much time teaching factoids before the kids get a chance to start experiments. Now they derive meaning by doing," he said.

Lakes physics teacher Mark Prosise agrees. "My students are collecting and analyzing data in an experiential way," he said. "They are learning through discovery."

One of the biggest proponents of the physics first idea is Leon M. Lederman. The 1988 Nobel Prize winner spoke to District 117 teachers and administrators last year to encourage their efforts.

McKay said he knows of only a handful of Lake County high schools that have adopted a "physics first" philosophy. And he says he's been getting a lot of calls from principals across the county looking for ideas on how they might start the program in their schools. And, most importantly, McKay says the students approve. "We're finally hearing from students who are saying, 'This finally makes sense.'"
Posted by Mercury at 5:00 AM