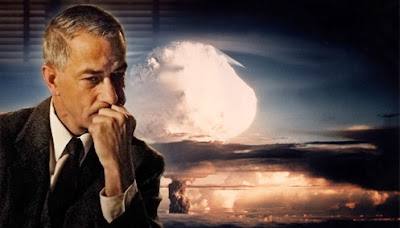 Okay, I sat through two hours of this documentary on the rise and fall of J. Robert Oppenheimer and must say that is one of the better offerings from PBS. Usually, "docudramas" flounder where the emphasis is placed on actors attempting to characterize famous individuals rather than the actual event as was PBS's "Einstein's Great Idea" where too much emphasis was spent on attempting to dramatize certain scientists set in lavish sets and costume. David Grubin's production was very different. David Strathairn's portrayal of Oppenheimer was to the point and limited to probably about 20% screen time allowing the narrator and guests to carry the force and message of the documentary interspersed with archival film and photographs.

The film illustrates a difference between an individual's interpretation of an ideology [communism] and strict adherence to its basic philosophy. Oppenheimer said over and over that certain elements of communism were relevant to him but he was not a card-carrying member involved in corrupting or compromising American policies or supporting a foreign government.

And high profile individuals with different agendas and inflated egos will have conflicts...J. Robert Oppenheimer vs Edward Teller and Lewis Strauus and the scientific ineptness of presidents Dwight Eisenhower and Harry Truman..

"The Trials of J. Robert Oppenheimer" is worth another viewing.

In the first dozen years of the atomic age, few men played a more pivotal role in shaping U.S. nuclear policy than the former banker Lewis Strauss. An ardent champion of the hydrogen bomb, he was also a strong believer in the importance of maintaining a large nuclear stockpile. His appointment to the U.S. Atomic Energy Commission (AEC) in 1946 (an agency he chaired from 1953 - 58) meant he was well placed to influence both President Truman's and President Eisenhower's decisions on nuclear issues and to oversee the atomic related activities of all federal agencies.

The thorny, owlish-looking Lewis Strauss started out life as a travelling shoe salesman working for his father. He later became an incredibly successful investment banker. By the time he left Wall Street to join the AEC, he was earning a million dollars a year. His new government appointment required him to give up all his business interests, which he told an interviewer, made him feel "like a man who is amputating his own leg."

Early on in his role as an AEC commissioner, Strauss argued that the U.S. needed to have a system in place to detect foreign atomic tests. As it turned out the monitoring system set up at his insistence, was established just in time to detect the first Soviet atomic test in August 1949.

The news that the U.S. no longer had a monopoly on nuclear weapons, pitted Strauss against other members of the AEC including its chairman David Lilienthal. Lilienthal wanted to respond to the Soviet test by increasing the production of atomic bombs while at the same time stepping up the effort to create international controls for weapons of mass destruction. Strauss argued vigorously for a crash program to build a hydrogen bomb: "the time has now come for a quantum jump in our planning... We should now make an intensive effort to get ahead with the super [hydrogen bomb]." Strauss won the day. And in January 1950, President Truman publicly announced a "crash" program to build a superbomb.

Conflict over the H-bomb also created tensions between Strauss and physicist Robert Oppenheimer, the father of the atomic bomb. Strauss told President Eisenhower that he would only accept the position of AEC chair if Oppenheimer played no role in advising the agency. He explained that he didn't trust Oppenheimer partly because of his consistent opposition to the superbomb. Within days of being sworn into office in July 1953, Strauss had all classified AEC material removed from Oppenheimer's office. By the end of the year, Oppenheimer's security clearance was revoked.

Over the years Strauss' arrogance and his insistence that he was always right made him unpopular on Capitol Hill. In 1959, after two months of exhausting hearings, the Senate rejected his nomination to be Secretary of Commerce. The ordeal was publicly humiliating for Strauss, especially after he was caught lying under oath. Afterwards the financier returned permanently to the private sector.

"Revisiting the trial of the father of the atomic bomb"

chicagotribune.com
In the middle of the last century, J. Robert Oppenheimer was one of the most famous men in America.

His leadership of the Manhattan Project, which produced the atomic bomb, turned him into one of the nation's most powerful figures, and he was certainly the country’s most acclaimed scientist during and after World War II. Glowing media coverage of his life and accomplishments portrayed him as the absent-minded genius who exhibited the kind of can-do spirit that helped America win the war.

In the '50s, however, Oppenheimer's political enemies conspired to drag this proud man down from his lofty perch—not necessarily for being arrogant, but for disagreeing with powerful advocates for ever larger and more terrifying nuclear bombs.

The excellent "American Experience" documentary "The Trials of J. Robert Oppenheimer"...opens with the famous scientist at his lowest point. In 1954, Oppenheimer, who was never charged with any crime, was grilled for weeks in an unusual hearing that flouted most, if not all, accepted legal procedures. Actor David Strathairn ("Good Night, and Good Luck") does a wonderful job of depicting the prickly scientist in these re-creations, which are a little stagey but which ably bring the trial transcript to life.

The hearing was convened by the Atomic Energy Commission to examine whether Oppenheimer, who had been close to Communist Party members earlier in his life, was a security risk or a Communist himself (eventually he was stripped of his security clearance). Experts interviewed for the documentary say one of the real goals of the hearing—and other investigations—was to humiliate and "break" him, says Richard Rhodes, author of "The Making of the Atomic Bomb."

"He was made to look like a fool," Rhodes says.

It's hard not to have sympathy for this flawed but brilliant man. Oppenheimer could be cruel and socially awkward, but in the end, he appears to have been done in by his desire to protect old friends who had been in the Communist Party. Without ignoring Oppenheimer's flaws and mistakes in judgment, the physicists and journalists interviewed for this two-hour film paint a picture of a man who rose to the occasion during the Manhattan Project but emerged from the war with qualms about the way the atomic bomb had changed the world.

The persecution of Oppenheimer through the trial "removed the legitimacy of criticism against more and more nuclear weapons," according to Martin J. Sherwin, author of "American Prometheus: The Triumph and Tragedy of J. Robert Oppenheimer."

Tragedy is certainly the right word for this tale.

In the matter of J. Robert Oppenheimer: transcript of hearing before Personnel Security Board and texts of principal documents and letters

American Prometheus: The Triumph and Tragedy of J. Robert Oppenheimer

Science and the Common Understanding

"The Trials of J. Robert Oppenheimer"
Posted by Mercury at 6:02 AM