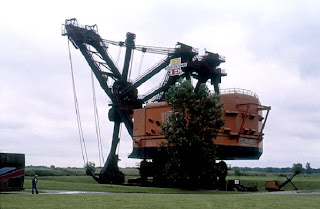 Mineral, Kansas
More on Stephen Chu and pressure from Republicans demanding that "...Mr. Chu be a more forceful advocate for nuclear energy."

The Wall Street Journal
WASHINGTON -- Physicist Steven Chu, President-elect Barack Obama's choice to run the Department of Energy, softened previously critical comments about coal and nuclear power, and distanced himself from earlier statements that U.S. gas taxes should be higher.

Testifying before a Senate panel considering his nomination, Mr. Chu warned of "dramatic, disruptive changes to our climate system in the lifetimes of our children and grandchildren" if the U.S. and other nations don't speed up efforts to reduce emissions of greenhouse gases. Making vehicles and buildings more efficient -- rather than increasing access to oil on federal land -- is the best step for reducing U.S. dependence on foreign oil, he said. "I do not underestimate the difficulty of meeting these challenges, but I remain optimistic," Mr. Chu said.

Mr. Obama has pledged to cut U.S. greenhouse-gas emissions 80% from 1990 levels by 2050, through new legislation. He also seeks to double over three years the amount of wind, solar and geothermal generating capacity, currently around 25,000 megawatts -- steps that have aroused skepticism and resistance from some industries.

In a speech Tuesday in Washington, the CEO of ConocoPhillips, James Mulva, called for being "realistic about the cost of green energy," and suggested policy makers were in danger of "inadvertently creating unattainable public expectations."

Lawmakers who attended the hearing of the Senate Committee on Energy and Natural Resources praised Mr. Chu's credentials, which include a Nobel Prize. Lawmakers pressed Mr. Chu with competing demands, and he responded by toning down or qualifying statements made when he was running the Lawrence Berkeley National Laboratory.

Republicans demanded Mr. Chu be a more forceful advocate for nuclear energy. Mr. Chu promised to accelerate the disbursal of loan guarantees that his agency is authorized to give to companies seeking to build nuclear reactors. In response to Democrats' unease about the expansion of nuclear plants, Mr. Chu said his agency needed to develop a better plan for waste disposal than the Yucca Mountain depository in Nevada.

Lawmakers from states with big coal-mining interests challenged Mr. Chu on his stance toward coal, which generates half of U.S. electric power. Mr. Chu two years ago referred to the expansion of coal-fired power plants as "my worst nightmare." On Tuesday, he offered Senators a more upbeat assessment of coal's future, calling it a "great national resource." He said he was optimistic his agency could help develop technology capable of capturing and safely storing the greenhouse-gas emissions from coal plants, and indicated he would oppose a "hard moratorium" on the construction of coal plants that lack such technology, as some Democrats advocate.

Ian Talley contributed to this article.

Steven Chu's slight change
Posted by Mercury at 7:12 AM