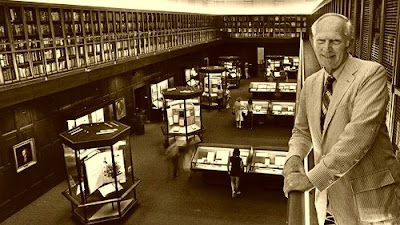 During his 17-year tenure, the San Marino institution evolved from an insular research facility into one of Southern California's leading educational and cultural centers.

The Los Angeles Times
James Thorpe, former director of the Huntington Library, Art Collections and Botanical Gardens who helped raise the public profile of the institution, turning it into one of Southern California's leading educational and cultural centers, has died. He was 93.

Thorpe, a scholar of English literature and former Princeton University professor, died Jan. 4 at his home in Bloomfield, Conn., according to the Huntington. The cause of death was cerebral vascular disease.

When Thorpe arrived at the Huntington in 1966, the San Marino institution was a quiet and insular research library and museum. During his 17-year tenure, scholarship -- which the Huntington calls the heart of its mission -- was bolstered by an increase in research fellowships, renovations to the research facility and acquisitions including the archive of the great 20th century American poet Wallace Stevens and the papers of astronomer Edwin Hubble.

The Huntington's education program also flourished under Thorpe. He expanded what had been a modest program of guided tours in the 1960s to include dozens of tours and classes each week conducted by a dedicated group of trained docents that numbered in the hundreds. At the end of his tenure as director, annual attendance had increased by more than 115,000.

Exhibitions at the Huntington were enhanced by a regular schedule of public talks and programs of dance, drama and music related to the collections.

He also started a major capital campaign to build a complex of meeting rooms, a lecture hall for public events and a visitor center.

"He was a very significant transitional figure who on the one hand reflected the past and was very popular with the docents but on the other hand, and more significantly, was the extent to which he envisioned the future," said Robert Skotheim, the president of Occidental College who was president of the Huntington from 1988 to 2001.

"What Jim really did was open the Huntington up in a more public way, anticipating what today is an excellent educational institution," Skotheim said.

Thorpe was born Aug. 17, 1915, in Aiken, S.C. He earned his bachelor's degree in English literature from the Citadel in 1936, his master's degree from the University of North Carolina a year later and his doctorate from Harvard in 1941. During World War II, he served in the Army Air Forces in India and later Okinawa, attaining the rank of colonel. He was awarded the Bronze Star.

After his discharge in 1946, Thorpe taught English at Princeton for 20 years and, for a time, was an assistant dean of its graduate school before moving to Southern California to assume the post of director of the Huntington.

During his time at the Huntington, he strengthened the nonprofit institution's leadership structure by creating a 30-member Board of Overseers to assist the five-member Board of Trustees. The overseers, which according to the Huntington now number 65, serve as advisors to the trustees on a variety of matters affecting the institution. They also play a key role in fundraising.

Thorpe also established support groups to attract major donors, corporations, business leaders and foundations to engage them in the intellectual life of the institution.

He returned to scholarship after leaving the post of Huntington director -- the position was renamed president in 1988. He stayed on as a senior research associate, writing, lecturing and publishing numerous works until his retirement in 1999.

He is survived by his wife, Elizabeth, whom he married in 1941; a son; a daughter; seven grandchildren; and five great-grandchildren.


Huntington Library and rare science books
Posted by Mercury at 4:38 AM