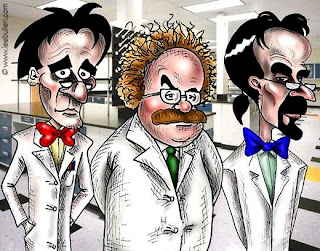 The centralization of science can yield results but as the author suggests...it may well overlook the value of the amateur scientist.

"A New Kind of Big Science"

Next summer, the Large Hadron Collider, Europe's $9 billion investment in particle physics, will take a handful of ions, hurl them through 17 miles of circular tunnel and smash them together so hard they will shatter into the finest atomic shards anyone has ever observed. And if all goes according to plan, the glints and flashes from those shards will at last reveal the mysterious Higgs boson, the one particle that endows all others with the property of mass.

For those of us who aren't particle physicists, that may sound awfully exotic, not to mention exorbitantly expensive. But if we take a step back, and view it in the broader context of contemporary science, the grand project of particle physics seems suddenly not such a wild exception, but rather a vivid example of a very broad trend: Across many different fields, new data are generated by a smaller and smaller number of bigger and bigger projects. And with this process of centralization come changes in what scientists measure — and even in what scientists are.

In physics, a slow drift toward centralization was given a sudden shove during the Second World War — think Manhattan Project — so it is perhaps not surprising that colliders today epitomize what historians have called "Big Science." But a similar evolution is now evident in virtually every discipline.

When a crystallographer wants to determine the structure of a molecule, she signs up for time at a big synchotron, which can generate the generate the powerful X-rays she'll need. When a biologist wants the sequence of a certain genome, he submits his proposal to a large sequencing center, where armies of automated machines read their way in parallel through different paragraphs of a genome’s text. And when an ecologist wants to study the effects of all that extra CO2 in the air, she’ll turn to the very same national labs that achieve particle smashing, Brookhaven and Oak Ridge, which have built systems for manipulating the atmosphere over entire forests.

It's not only scientific instruments, but also the scientists themselves who are transformed by centralization. If the 19th century was an age of far-flung investigators alone in the wilderness or the book-lined study, the 21st century is, so far, an age of scientists as administrators. Many of the best-known scientists of our day are men and women exceptionally talented in herding the resources — human and otherwise — required to plan, construct and use big sophisticated facilities.

In a way, centralization seems unavoidable. The governments that fund research have themselves become far more centralized, so perhaps science has been pulled along in the process. But even without that prevailing wind, science would, I think, head in the very same direction.

A young discipline is bound to move first through the data it can gather most easily. And as it does, it also defines more exactly what it must measure to test its theories. As the low-hanging fruit vanish, and the most precious of fruits are spotted high above, bigger investments in harvesting equipment become necessary. Centralization is a way to extend scientists’ reach.

But of course, there are also some drawbacks. There's something disturbingly hierarchical about the new architecture of the scientific community: what was before something like a network of small villages is today more like an urban high-rise, with big offices at the top and a lot of cubicles down below.

The trouble with this is not just what it means for the folks in the cubicles, but also that the entire business should rely so heavily on the creativity and vision of relatively few managers. If the glassy office is occupied by Einstein, that’s great, but of course there’s always a chance it won’t be. (Tellingly, this point was made to me by a friend who grew up in the Soviet Union. "Trust me," he said, "centralization is risky.")

And then there's that problem of relating to Big Science when you're standing outside the building, looking up. The difficulty is not just that the research is recondite, but that the work is institutional, as opposed to individual. After all, not many people really understood the paper on general relativity, but many did connect with Einstein. Sure, we all pitch in our tax dollars, but it’s hard to feel a whole lot of personal involvement in the search for the Higgs boson.

But if Big Science is what it takes to gather the truly precious data, what are we to do?

There is another way to extend our scientific reach, and I believe it can also restore some of what is lost in the process of centralization. It has been called Citizen Science, and it involves the enlistment of large numbers of relatively untrained individuals in the collection of scientific data. To return to our architectural metaphor, if Big Science builds the high-rise yet higher, Citizen Science extends outward the community of villages.

For me, an especially inspiring example of Citizen Science is the Audubon Society's Christmas Bird Count. Every winter, from mid December to early January, tens of thousands of intrepid hobbyists fan out across North America, and together, they do their best to answer two basic questions: How many birds are there? And what kinds?

It’s a simple sort of data, to be sure, but it is nonetheless scientifically invaluable. The CBC dataset now covers 109 years, and this remarkable temporal extent, along with geographic range that spans the continent, enables scientists to address questions that would otherwise be as inaccessible as a Higgs boson. Just in the past few years, scientists have used the CBC dataset to track the emergence and impact of West Nile virus, to understand the ecological effects of competition between introduced species and to measure the shift that birds make toward the poles in response to global warming.

The CBC is surely a glowing exemplar, but there are many other cases of Citizen Science in action. Even underwater, a snorkeling citizen can serve science by taking down a few notes, which he’ll enter into a website when he returns to shore. The Internet is a natural medium for Citizen Science — widely distributed yet highly organized, it's the ultimate network of villages — and an initiative known as The Encyclopedia of Life has called upon the world’s hobbyists to contribute their sundry discoveries to a Web-based library of species: one page per organism, featuring photos, taxonomy, natural history, even ecology.

Of course, Citizen Science won't be very helpful in genome sequencing or particle physics. But it will be helpful — indeed, perhaps essential — for gathering a kind of data that will be increasingly important over the next few decades. Widespread networks of observers are especially well-suited to detecting global change — shifts in weather patterns; movements in the ranges of species; large-scale transformations of eco-systems — and that, unfortunately, is something we will need to know far more about if we are to mitigate and adapt to the fateful effects we are having on the planet.

In the end, though, what may be most important about Citizen Science is what it could mean for the relationship between citizens and science. When everyone is gathering data, that rather austere and forbidding tower becomes a shared human pursuit. In 1963, Alvin Weinberg, who was then the director of Oak Ridge, likened Big Science to the greatest monuments civilizations have ever built: the cathedrals of medieval Europe; the pyramids of Egypt.

But just as we build higher our temples of scientific investigation, so too should we strengthen their foundations, and broaden their congregations. Perhaps the new administration, which has already proven itself so skilled in using the Internet to coordinate broad networks of volunteers, ought to consider a national initiative in Citizen Science. It would provide us with timely data, and it would make us better citizens.


Amateur scientist will collaborate with astronomers

Value of amateur scientists--"Hanny's Voorwerp"
Posted by Mercury at 6:50 AM