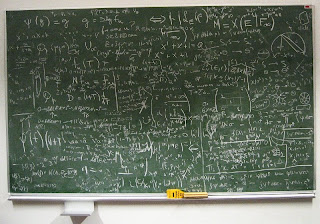 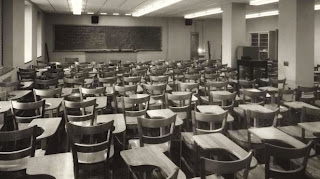 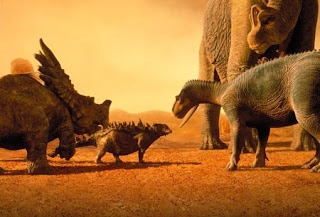 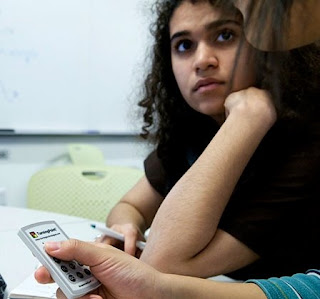 And so M.I.T. will abandon the large lecture hall. They, with the black boards, will die like the dinosaurs and be replaced with high technology methodologies to interact with students. Despite nostalgia, this could be a good thing.

"At M.I.T., Large Lectures Are Going the Way of the Blackboard"

The New York Times
CAMBRIDGE, Mass. — For as long as anyone can remember, introductory physics at the Massachusetts Institute of Technology was taught in a vast windowless amphitheater known by its number, 26-100.

Squeezed into the rows of hard, folding wooden seats, as many as 300 freshmen anxiously took notes while the professor covered multiple blackboards with mathematical formulas and explained the principles of Newtonian mechanics and electromagnetism.

But now, with physicists across the country pushing for universities to do a better job of teaching science, M.I.T. has made a striking change.

The physics department has replaced the traditional large introductory lecture with smaller classes that emphasize hands-on, interactive, collaborative learning. Last fall, after years of experimentation and debate and resistance from students, who initially petitioned against it, the department made the change permanent. Already, attendance is up and the failure rate has dropped by more than 50 percent.

M.I.T. is not alone. Other universities are changing their ways, among them Rensselaer Polytechnic Institute, North Carolina State University, the University of Maryland, the University of Colorado at Boulder and Harvard. In these institutions, physicists have been pioneering teaching methods drawn from research showing that most students learn fundamental concepts more successfully, and are better able to apply them, through interactive, collaborative, student-centered learning.

The traditional 50-minute lecture was geared more toward physics majors, said Eric Mazur, a physicist at Harvard who is a pioneer of the new approach, and whose work has influenced the change at M.I.T.

"The people who wanted to understand," Professor Mazur said, "had the discipline, the urge, to sit down afterwards and say, 'Let me figure this out.'" But for the majority, he said, a different approach is needed.

"Just as you can’t become a marathon runner by watching marathons on TV," Professor Mazur said, "likewise for science, you have to go through the thought processes of doing science and not just watch your instructor do it."

Another proponent of the new approach is Carl Wieman, a Nobel Prize-winning physicist who directs a science education initiative at the University of British Columbia.

In an article in the education journal Change last year, Dr. Wieman noted that the human brain "can hold a maximum of about seven different items in its short-term working memory and can process no more than about four ideas at once."

"But the number of new items that students are expected to remember and process in the typical hourlong science lecture is vastly greater," he continued. "So we should not be surprised to find that students are able to take away only a small fraction of what is presented to them in that format."

At M.I.T., two introductory courses are still required — classical mechanics and electromagnetism — but today they meet in high-tech classrooms, where about 80 students sit at 13 round tables equipped with networked computers.

Instead of blackboards, the walls are covered with white boards and huge display screens. Circulating with a team of teaching assistants, the professor makes brief presentations of general principles and engages the students as they work out related concepts in small groups.

Teachers and students conduct experiments together. The room buzzes. Conferring with tablemates, calling out questions and jumping up to write formulas on the white boards are all encouraged.

"There was a long tradition that what it meant to teach was to give a really well-prepared lecture," said Peter Dourmashkin, a senior lecturer in physics at M.I.T. and a strong proponent of the new method. "It was the students' job to figure it out."

The problem, say Dr. Dourmashkin and others in the department, is that a lot of students had trouble doing that. The failure rate for those lecture courses, even those taught by the most mesmerizing teachers, was typically 10 percent to 12 percent. Now, it has dropped to 4 percent.

Another big concern was attendance.

John Belcher, a space physicist who arrived at M.I.T. 38 years ago and was instrumental in introducing the new teaching method nine years ago, was considered an outstanding lecturer. He won M.I.T.’s top teaching award and rave reviews from students. And yet, as each semester progressed, attendance in his introductory physics courses fell to 50 percent, as it did, he said, for nearly all of his colleagues.

"M.I.T. students are very busy," Professor Belcher said. "They see the lecture as dispensable, that is that they can get it out of a book more efficiently than getting up, getting dressed and going to lecture."

After three years, Professor Belcher had had enough. "I had poor attendance, and was failing 10 to 15 percent, and grading the tests and shaking my head in despair about how little was getting across," he said. "And this is a subject — electromagnetism — that I love."

The new approach at M.I.T. is known by its acronym, TEAL, for Technology Enhanced Active Learning.

Unlike in the lectures, attendance counts toward the final grade, and attendance is up to about 80 percent.

Monique Squiers, a sophomore who intends to become a surgeon, liked her TEAL classes so much that she has signed on as a teaching assistant. "You can say, 'Hey, professor, I didn't really get what you went over at this point, could you explain it to me a little more?'" Ms. Squiers said. "If anything, they’re happy when someone doesn't get it."

Of the core science curriculum required of all freshmen, only introductory physics follows the new method, Professor Belcher said. Math, biology and chemistry are still taught through large lecture classes and small recitations.

In the physics department, debate over teaching methods continues. Younger professors tend to be more enthusiastic about TEAL than veterans who have been perfecting their lectures for decades.

One of the newer professors, Gabriella Sciolla, who arrived in 2003, was teaching a TEAL class on circuits recently. She gauged the level of understanding in the room by throwing out a series of multiple-choice questions. The students "voted" with their wireless "personal response clickers" — the clickers are essential to TEAL — which transmitted the answers to a computer monitored by the professor and her assistants.

"You know where they are," Professor Sciolla said afterward. She can then adjust, slowing down or engaging students in guided discussions of their answers, as needed.

Lecturing in 26-100, she said, she could only look out at the sea of faces and hope the students were getting it.

"They might be looking intently at you, understanding everything," Professor Sciolla said. "Or they might be thinking, 'What am I going to do when I get out of this bloody class?'"
Posted by Mercury at 5:27 AM