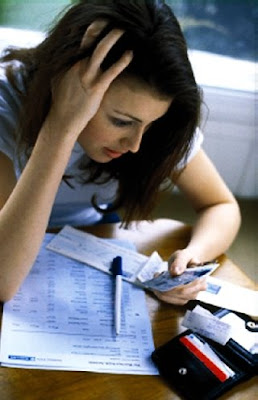 It is absolutely shameful that some institutions of higher education are bed partners with some credit card companies and for what...money. And who suffers...students. It is also a matter of student privacy.

The New York Times
EAST LANSING, Mich. — When Ryan T. Muneio was tailgating with his parents at a Michigan State football game this fall, he noticed a big tent emblazoned with a Bank of America logo. Inside, bank representatives were offering free T-shirts and other merchandise to those who applied for credit cards and other banking products.

"They did a good job," Mr. Muneio, 21 and a junior at Michigan State, said of the tactic. "It was good advertising."

Bank of America's relationship with the university extends well beyond marketing at sports events. The bank has an $8.4 million, seven-year contract with Michigan State giving it access to students' names and addresses and use of the university's logo. The more students who take the banks' credit cards, the more money the university gets. Under certain circumstances, Michigan State even stands to receive more money if students carry a balance on these cards.

Hundreds of colleges have contracts with lenders. But at a time of rising concern about student debt — and overall consumer debt — the arrangements have sounded alarm bells, and some student groups are starting to push back.

The relationships are reminiscent of those uncovered two years ago between student loan companies and universities. In those, some lenders offered universities an incentive to steer potential borrowers their way.

Here at Michigan State, the editors of the student newspaper wrote this fall that "it doesn't take a giant leap for someone to ask why the university should encourage responsible spending when it receives a cut of every purchase."

At Arizona State University, students set up a table on campus last spring to warn of the danger of debt and urge students to support limits on on-campus marketing.

The contracts, whose terms vary but usually involve payments to colleges or alumni associations that agree to provide lists of students’ names, have come under harsh criticism in Washington.

"That is absolutely outrageous, the sharing of students' information with the banks," Representative Carolyn B. Maloney, Democrat of New York, who oversaw a June hearing on campus credit card marketing, said in a recent interview. "That should be outlawed."

College campuses are one place that young Americans are introduced to credit and the possibility of spending beyond their means, a problem now confronting the nation as a whole. For banks, the relationships are a golden marketing opportunity. For colleges, they are a revenue source at a time of declining public funding. And for students, they help pay the bills and allow more shopping.

But debt incurred in college becomes a serious burden at graduation, especially in a recession in which jobs are scarce. A survey of more than 1,500 college students by US PIRG in Washington found that two-thirds had at least one credit card. Seniors with balances had an average debt of $2,623 on their cards.

University officials say that their agreements with card issuers comply with the law and bring in valuable revenue.

"It provides money for scholarships and other programs," said Terry R. Livermore, manager of licensing programs at Michigan State. He said that the program was aimed primarily at alumni and the university would not include sharing student information in future credit card contracts. "The students are such a minuscule portion of this program."

Jennifer Holsman, executive director of the alumni association at Arizona State, said the association tried to teach students about responsible uses of credit. "We work closely with Bank of America to provide educational seminars to students in terms of being able to get information about how to pay off credit cards, how not to keep balances," she said.

Credit card issuers say that they try to educate students to use cards responsibly and that the cards they offer on campus have more restrictive terms than cards offered to alumni.

"The available credit for undergraduates is capped at $2,500," said Betty Riess, a spokeswoman for Bank of America. "We want to take a fair and responsible approach to lending because we want to build the foundation for a longer-term banking relationship."

Ms. Riess said the bank had agreements with about 700 colleges and alumni associations, making it one of the biggest, if not the biggest, card issuer on campuses. She said that only 2 percent of the open accounts under those agreements belonged to students, but also said it was not possible to determine what percentage of program revenue resulted from fees and charges on those student cards.

Stephanie Jacobson, a spokeswoman for JPMorgan Chase, wrote in an e-mail message that the bank had fewer than 25 contracts with colleges or alumni associations and that while some of the contracts gave it the right to ask for and use lists of student names and addresses, the bank had not done so since 2007.

That may be because football games present a marketing opportunity that requires no address information. Abigail D. Molina, a second-year law student at the University of Oregon, applied in 2007 for a Chase Visa offered at a tent outside a football game. In exchange, she received a blanket.

"I mostly wanted the blanket," Ms. Molina said. She added that this was her second university credit card. In 1994, when she was an undergraduate at the university, she applied for a card at a booth on campus and then accumulated about $30,000 in debt, almost all of it on the card. In 2001 she filed for bankruptcy. Looking back, she said it was "shockingly easy" to get the card, even as a first-year student.

Mr. Muneio, the Michigan State student, said he did not apply for a Bank of America card because he already had two Visa cards. "The last thing I need is another account to keep track of."

Many students are unaware of the contracts that universities have with credit card issuers and do not question the presence of marketers on campus or applications in their mailboxes, despite recent protests on a few campuses.

Sometimes, the contracts have confidentiality provisions. Universities may try to distance themselves, stating that the contracts are only between alumni associations and banks. But the universities provide alumni groups with lists of current students’ names, addresses and telephone numbers, which the groups pass on to banks.

The New York Times obtained information about and, in some cases, copies of contracts between lenders, public colleges and their alumni associations using open records requests. Because private colleges are not subject to open records laws, they are not included.

While most universities contacted for this article did not provide detailed financial information on the contracts — the University of Pittsburgh, for example, confirmed only that it had an agreement — two did share numbers.

The alumni association of the University of Michigan is guaranteed $25.5 million over the term of its 11-year agreement with Bank of America. Under the agreement, the association agreed to provide lists of names and addresses of students, alumni, faculty, staff, donors and holders of season tickets to athletic events.

Much of the money goes toward scholarships, said Jerry Sigler, vice president and chief financial officer of the alumni association. He was unsure what students were told about the program.

"Students are generally told how they can opt out of having their information publicly displayed in directories or provided in response to requests like this," Mr. Sigler added. "But it's not to my knowledge specific to the credit card program."

Michigan State University gets $1.2 million a year but is guaranteed at least $8.4 million over seven years, according to its agreement. The contract calls for a $1 royalty to the university for every new card account that remains open for at least 90 days, $3 for every card whose holder pays an annual fee, and a payment of a half percent of the amount of all retail purchases using the cards.

For cards that do not have an annual fee, the bank pays $3 if the holder has a balance at the end of the 12th month after opening an account, a provision that appears to give the university an incentive to get cardholders into debt.

Ball State University's alumni association, which has a contract with JPMorgan Chase, does not provide information on students, said Ed Shipley, executive director of the association. "Who we market to is our alumni because that's our purpose," he said. However, the bank is permitted to set up marketing tables at athletic events.

The University of Oregon, whose alumni association also has a marketing agreement with Chase, stopped providing student addresses as concern grew about student debt, according to Julie Brown, a university spokeswoman. The university still permits marketing booths at athletic events.

Some research suggests that students may be using credit cards less frequently, in favor of debit cards linked to their bank accounts. A survey last spring by Student Monitor, a Ridgewood, N.J., company that tracks trends on campus, found that 59 percent of undergraduate students had debit cards, up from 51 percent in 2000.

But universities have arrangements with banks that offer debit cards too, perhaps raising some of the same issues that the credit card deals do.

At New Mexico State University, for example, students are given the option of opening a bank account with Wells Fargo if they want to convert their campus identification into a debit card.

The accounts are not mandatory, said Angela Throneberry, assistant vice president for auxiliary services at the university. But, she said, "There's some revenue sharing that happens as part of this."


Universities and money lenders...good idea?
Posted by Mercury at 5:53 AM