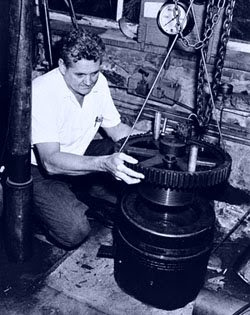 The New York Times
J. Lamar Worzel, an ocean geophysicist and a designer of jury-rigged devices that gave an early view of the peaks and troughs of the deep sea and revealed the way sound flows below the waves, died Dec. 26 at his home in Wilmington, N.C. He was 89.

The cause was a heart attack, his daughter, Sandra Browne, said.

Over a 40-year career, Dr. Worzel logged untold nautical miles around the globe, most often aboard the black-hulled, three-masted research schooner Vema, and slipped thousands of fathoms below the surface on Navy submarines.

His research provided the underpinnings for one of the most successful of American espionage efforts in the cold war, eavesdropping on the sounds made by Soviet submarines.

Working with his mentor, Maurice Ewing, the founder of the Lamont-Doherty Earth Observatory of Columbia University, Dr. Worzel made significant advances in the days when the deep sea remained largely uncharted scientific territory.

Dr. Ewing had been Dr. Worzel's professor at Lehigh University in the late 1930s, and they worked together — along with a bevy of other Ewing students — first at the Woods Hole Oceanographic Institution in Massachusetts and, starting in 1948, at what was originally called the Lamont Geological Observatory. The president of Columbia at the time, Dwight D. Eisenhower, had lured them to open their own observatory at an estate overlooking the Hudson River in Palisades, N.J.

With Dr. Ewing brainstorming and Dr. Worzel leading the designers, the team slapped together precursors of more precisely manufactured measuring devices: a camera to take photos thousands of feet below the ocean’s surface, with a coffee-can lid for a flash reflector and a thick, diner-style drinking glass as its casing; a seismograph timed by a modified railroad pocket watch; an oscillograph, to record electrical changes, run by a motor from a toy electric train.

"To detonate explosions under deep-sea pressures up to 8,000 pounds per square inch, presumed impossible by experts, Worzel carefully packed explosives into inner tubes, then figured out how to make them go off by adapting paper caps from toy cowboy revolvers," Kevin Krajick, the senior science writer at the Lamont-Doherty observatory, said on Wednesday.

Frank Press, a former president of the National Academy of Sciences, said that among other accomplishments, Drs. Worzel and Ewing "established that the sea floor was not a former continent, but part of an original ocean basin."

"The old theory," explained Dr. Press, a co-author of the geology textbook "Understanding Earth," "was that the sea floor was an ancient continent that sank millions of years ago." But measurements taken by Drs. Worzel and Ewing determined that the crust beneath the sea floor was much thinner and had other different physical properties than the crust beneath continents.

Measurements made by the Ewing-Worzel team also found "shadow zones" — underwater regions where specific combinations of temperature and pressure blocked out sound waves, including sonar from surface vessels, enabling submarines to hide.

Their work also revealed "deep sound channels" — narrow zones about 3,000 feet down that transmit low-frequency sounds over thousands of miles. In 1960, for example, the team dropped a depth charge into waters off Australia. The sound waves were detected 12,000 miles away and 223 minutes later, in Bermuda.

"This discovery became the basis of the Navy’s vast cold war Sofar — sound fixing and ranging — program and its successors," Mr. Krajick said, "secret weapons that girded the world with underwater listening devices to identify and track Soviet subs."

John Lamar Worzel was born on Staten Island on Feb. 21, 1919, the son of Howard and Mary Wilson Worzel. He graduated from Lehigh in 1940 and soon joined Dr. Ewing's team at Woods Hole. He received a master's degree in geophysics from Columbia in 1949 and a doctorate there a year later.

Besides his daughter, Dr. Worzel is survived by his wife of 67 years, the former Dorothy Crary; three sons, Howard, Richard and William; eight grandchildren; and two great-grandchildren.

When Dr. Ewing became director of the Lamont observatory in 1948, he chose Dr. Worzel as his deputy. Much of their work was financed by the Navy. In the late '60s, with student protests challenging military research on college campuses, they opened the Palisades Geophysical Institute, to continue classified Navy research. While serving as the institute’s president, Dr. Worzel maintained his academic posts.

In 1972, Drs. Worzel and Ewing left Columbia for the University of Texas. When Dr. Ewing died, two years later, Dr. Worzel succeeded him as director of the university's Institute of Geophysics.

At Columbia, Dr. Worzel acquired a series of research vessels, including the Vema, then took them to sea.

In 1951, he led an expedition during which an echo sounder discovered a mountain more than a mile below the surface, 200 miles off Cape Cod. Four years later, magnetic readings during another expedition found a volcano below the sea floor, 100 miles east of the New Jersey coast. And four years later, on another voyage, four snail-like creatures that until then were believed to have been extinct for 300 million years were brought up alive from a depth of 18,000 feet, 200 miles west of Peru.

"Eighty percent of the Earth's surface is water," Dr. Worzel said in 1955. "We're just beginning to find out what that portion is really about."
Posted by Mercury at 6:31 AM