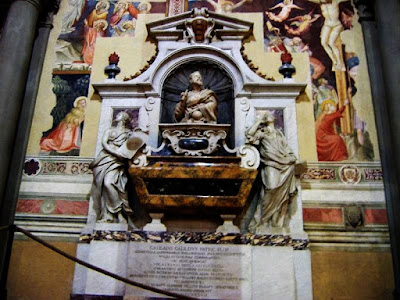 "One of the "errors" that Galileo made...is that he believed Saturn was not perfectly round but may have had an irregular, inflated side."
So postulates Paolo Galluzzi the director of the Museum of History and Science in Florence. He and Peter Watson wish to exhume Galileo's body and extract some DNA and subject it to a science model to determine the status of Galileo's eyesight. I'm not sure a sample can be taken. And even if a sample is acquired wouldn't it have been subject to some contamination.

Reuters
ROME - Italian and British scientists want to exhume the body of 16th-century astronomer Galileo for DNA tests to determine if his severe vision problems may have affected some of his findings.

The scientists told Reuters yesterday that DNA tests would help answer some unresolved questions about the health of the man known as the father of astronomy, whom the Vatican condemned for teaching that the Earth revolves around the sun.

"If we knew exactly what was wrong with his eyes we could use computer models to re-create what he saw in his telescope," said Paolo Galluzzi, director of the Museum of History and Science in Florence, the city where Galileo is buried.

Galileo, who lived from 1564 to 1642, is known to have had intermittent eye problems for the second half of his life and was totally blind for his last two years.

"There were periods when he saw very well and periods when he did not see very well," said Dr. Peter Watson, president of the Academia Ophthalmologica Internationalis and consultant to Addenbrooke's University Hospital, Cambridge.

Watson, who has studied Galileo's handwriting, letters, and portraits of the astronomer, suspects he may have had unilateral myopia, uveitis - an inflammation of the eye's middle layer - or a condition called creeping angle closure glaucoma.

Watson believes Galileo did not acquire eye problems by looking at the sun but by systemic illnesses, including an attack when he was young that left him temporarily deaf and caused bloody discharges and arthritis so severe he was bedridden for weeks.

He was under particular stress when he was tried for heresy by the Inquisition because the Copernican theory he supported conflicted with the Bible.

One of the "errors" that Galileo made, which Galluzzi suspects may have been attributed to his bad eyesight, is that he believed Saturn was not perfectly round but may have had an irregular, inflated side.

With his 20-power telescope and with his eyes in bad shape he might have mistaken Saturn's gaseous ring to surmise that it was formed of one planet with two moons as satellites.

"This was probably a combination of errors. He probably expected to find satellites and his eyesight may have contributed to some confusion," said Galluzzi.
Posted by Mercury at 6:36 AM