LAMOST ushers in "Year of Astronomy" 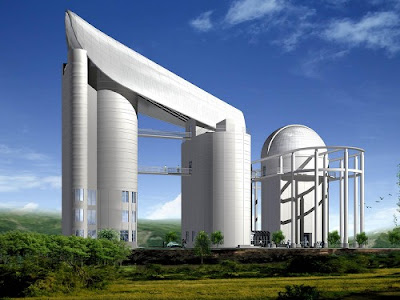 The Large Sky Area Multi-Object Fibre Spectroscopic Telescope (LAMOST) is a meridian reflecting Schmidt telescope. Using active optics technique to control its reflecting corrector makes it a unique astronomical instrument in combining large aperture with wide field of view. The available large focal plane may accommodate up to thousands of fibers, by which the collected light of distant and faint celestial objects down to 20.5 magnitude is fed into the spectrographs, promising a very high spectrum acquiring rate of ten-thousands of spectra per night. The telescope will be located at the Xinglong Station of National Astronomical Observatories. The project’s budget is RMB 235 millions yuan. It will bring Chinese astronomy into the 21century with a leading role in wide field spectroscopy and in the fields of large scale and large sample astronomy and astrophysics.--Wikipedia

IYA2009 was initiated by United Nations Educational, Scientific and Cultural Organization (UNESCO) and the International Astronomy Union (IAU) as a way to commemorate the 400th anniversary of the moment when Italian astronomer Galileo Galilei (1564-1642) began observing the universe through a telescope.

"The universe is yours to discover during the International Year of Astronomy. It's not only a year for astronomers but also more importantly, it's for the whole public," said Zhu Jin, president of the planetarium. "We hope more and more people will join us."

Every country will hold it's own festivities in January and February in recognition of the discovery.

There will be a series of activities, such as speeches, observations, teacher trainings, article competitions and a National Olympiad in Astronomy for middle school students and pupils, Zhu said.

"China has the longest history of astronomic observation," said Ji Peiwen, an official with the National Science Foundation of China.

"The country made a lot of contribution to the astronomy world in recent years, by sending its detector to the moon and a taikonaut walked in the outer space."

"That means China will add more contributions to the world's astronomy field," he said.

Global events for IYA2009 include 100 Hours of Astronomy, an observational relay, and an exhibition entitled: From Earth to the Universe (FETTU) Cornerstone Project.

China will also take part in World at Night, an event where people around the world turn of their lights to see stars.

"Ever since Galileo held up his telescope toward the sky, when human being's view towards the universe changed, mankind had never stopped pursuing the mystery of the universe," said Wang Enge, deputy general secretary of the Chinese Academy of Sciences.

LAMOST
Posted by Mercury at 7:05 AM