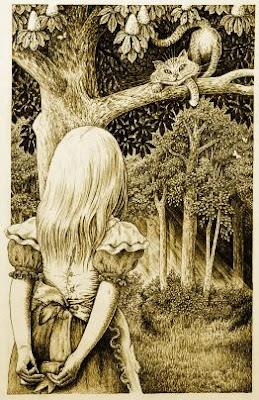 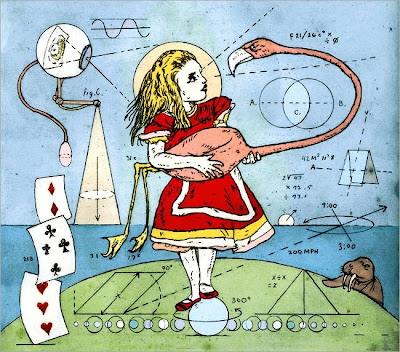 A new book is out discussing the mathematics of Lewis Carroll...Lewis Carroll in Numberland: His Fantastical Mathematical Logical Life by Robin Wilson.

"How to Measure a Cheshire Grin?"

The New York Times
Charles Lutwidge Dodgson, better known as Lewis Carroll, was a mathematician at Oxford University for most of his life. His fanciful "Alice's Adventures in Wonderland" and "Through the Looking Glass" are quite familiar to us, as, to a lesser extent, are his photographs of young children. In "Lewis Carroll in Numberland," the distinguished British mathematician Robin Wilson has filled a perceived gap in the writings about Carroll by describing in a straightforward, jabberwocky-free fashion the author's mathematical accomplishments, both professional and popular.

Wilson begins this fine mathematical biography with an account of Dodgson's idyllic North England childhood. Born in 1832, the eldest son in a large family, Dodgson was mathematically gifted like his clergyman father. He read widely, wrote amusing pamphlets for his siblings and dazzled his teachers. As Wilson documents, some of Dodgson's later concerns with logic, time and puzzles were already apparent in his pamphlets and letters.

Proceeding linearly through Dodgson's life, Wilson pays particular attention to his early career at Oxford, including the sometimes tedious details of exams, classes and the tutoring of fellow students. But even at the beginning of his career, Dodgson demonstrated a playful approach to mathematics, frequently injecting little puzzles into his lessons. (One of his classics: A cup contains 50 spoonfuls of brandy, and another contains 50 spoonfuls of water. A spoonful of brandy is taken from the first cup and mixed into the second cup. Then a spoonful of the mixture is taken from the second cup and mixed into the first. Is there more or less brandy in the second cup than there is water in the first cup?)

During these early years, Dodgson developed what would become a lifelong fascination with geometry, an interest that led to his many explications and pedagogical enhancements of Euclid’s "Elements." Wilson explains these clearly for those without mathematical background, as well as Dodgson’s later work on algebraic determinants and his idiosyncratic techniques for evaluating them to solve systems of linear equations.

Dodgson's mathematical career — and perhaps even his literary career — would not have been possible without the Rev. Henry Liddell. In 1855, Liddell became dean of Christ Church and the following year appointed Dodgson a lecturer in mathematics. Liddell had four children, including one little girl named Alice. Wilson briskly dismisses the argument that Dodgson's photographs of Alice and other girls, sometimes nude or semi-nude, show he was a pedophile. "In common with many of his generation, he regarded young children as the embodiment of purity and he delighted in their innocence," Wilson writes, adding that Dodgson's vows of celibacy, which he took in 1861 (though he never became a priest), "would have outlawed any inappropriate behavior, and there has never been a shred of evidence of anything untoward."

Despite his voluminous output, Dodgson, who never married, remains inscrutable as a person, at least to me. A religiously, politically and personally conservative man, he revealed no unseemly visceral urges, but he did have an interest in politics. Through it he came to investigate voting and apportionment systems; he pointed out the possible faults of majority rule, runoffs, eliminations and other procedures, and proposed various alternative arrangements, which also had shortcomings. These insights foreshadowed Kenneth Arrow’s 1951 theorem showing that any voting framework satisfying certain minimum conditions sometimes produces unfair results.

Wilson also discusses Dodgson's proposals for ciphers and codes, his suggestions for improvements in sports and tournament scoring, and his logic diagrams, which in some ways better elucidate the conclusions of syllogisms than the more familiar Venn diagrams. But the variety of his endeavors aside, Dodgson's mathematics has not proved influential or enduring. More long lasting have been his geometrical, arithmetical and logical puzzles, well-chosen examples of which Wilson strews throughout the book, along with excerpts from some of his often teasing letters.

Wilson's aim is to concentrate on Dodgson's scholarly work rather than on the whimsical "Alice" books, but when pushed too hard the dichotomy between them breaks down. Even Dodgson’s mathematical work contained wordplay and humorously literal interpretations. Contrariwise, his popular work, always under the pseudo­nym Lewis Carroll, refers obliquely to serious mathematical and philosophical issues.

Wilson doesn't mention it, but this unwarranted bifurcation brings to mind the philosopher George Pitcher's 1965 essay "Wittgenstein, Nonsense, and Lewis Carroll," which highlights telling similarities between the philosophical writings of Wittgenstein and the popular work of Carroll. Both men were concerned with nonsense, logical confusion and language puzzles. But while Wittgenstein was tortured by these things, Carroll was, or at least appeared to be, delighted by them. The relation between the two is similar in this respect to that between, say, Soren Kierkegaard and Woody Allen.

Finally, in case you're wondering, there’s exactly as much brandy in the water as there is water in the brandy. Most frabjous!

[John Allen Paulos is a professor of mathematics at Temple University. His most recent book is "Irreligion: A Mathematician Explains Why the Arguments for God Just Don’t Add Up."] 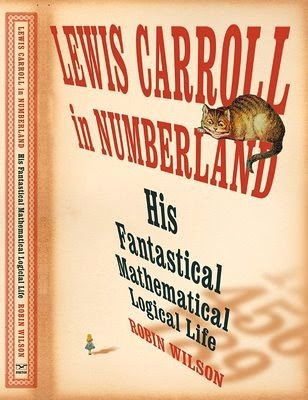 Thank you for writting about this book. i will be sure to check it out.