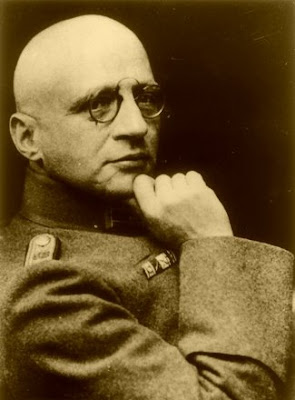 Fritz Haber
December 9th, 1868 to January 29th, 1934
Good thing: Synthesis of ammonia from nitrogen and hydrogen; bad thing: Use of chlorine gas during World War I and Zyklon B used at the Nazi concentration camps. [Incidentally, a lot of people get Mustard Gas and Phosgene confused. Check these links to discern the differences: Mustard Gas and Phosgene ] Now a short documentary film has been made...Haber: The Father of Chemical Warfare.

"Haber At The Oscars, 69-Molecule Answer"

Chemical & Engineering News
Fritz Haber (1868–1934), one of the most enigmatic figures in the history of chemistry, could become the basis for an ACADEMY AWARD via a film about the first use of chemical warfare.

Haber is best known for devising a direct synthesis of ammonia from nitrogen and hydrogen. Carl Bosch (1874–1940) later perfected large-scale ammonia production by Haber's method, an achievement that led to inexpensive fertilizers. Haber received the Nobel Prize in Chemistry in 1918 for his ammonia work, and Bosch later shared the 1931 prize for his high-pressure production methods.

Despite the positive contributions to science, Haber has been vilified for carrying out the first chemical attack, in the form of chlorine gas, during the early days of World War I. And one of the insecticides he developed, the cyanide-based Zyklon B, later became a standard means of mass murder in Nazi Germany concentration camps.

Little had been written about Haber's life until recently, because his papers had been kept locked away. When the papers were made public in the early 1990s, they opened the floodgates to myriad depictions of the scientist's life in books, a play, an opera, and a short film.

The 35-minute film, "Haber: The Father of Chemical Warfare," is a docudrama written and directed by Daniel Ragussis. It captures a snapshot of the chemist's life when he was pressed into service by the German government to help win WWI. Although Haber voiced his reservations about using chemicals on the battlefield, his sense of duty to his country led him to see the project through and supervise the first use of chlorine in the trenches near Ypres, Belgium, in April 1915. You'll have to watch the film to see what happened.

"Haber" has been making the rounds of the film-festival circuit, and recently took home the L.A. Shorts Film Festival's Best of the Fest award, which qualifies the film for an Academy Award nomination. The nominations will be announced later this month. Stay tuned.

Do 69 molecules hold the key to understanding diseases? This is a question that glycobiologist Jamey D. Marth of the University of California, San Diego, is aiming to answer. By reviewing findings from multiple disciplines, Marth says that only 69 MOLECULAR BUILDING BLOCKS (or maybe a few more when the counting is done) make up the four fundamental components of cells: nucleic acids (DNA and RNA), proteins, sugars, and lipids.

Marth envisions that this collection of eight nucleosides that make up DNA and RNA, 20 amino acids that make up proteins, 33 monosaccharides that create glycan linkages found throughout cells, and eight classes of lipids that compose cell membranes could function as a biochemical version of the periodic table of the elements.

"These building blocks provide the structural basis for the molecular choreography that constitutes the entire life of a cell," Marth says. In particular, the glycans and lipids are produced in processes that aren't encoded by genes, so those two cellular components, rather than the human genome and proteome, "may hold the keys to uncovering the origins of grievous diseases that continue to evade understanding," he believes.

Marth's idea has mostly been flying under the radar. But that situation should change now that he is finalizing plans to form a research institute that will use the molecular platform to delve into the cellular basis of disease.