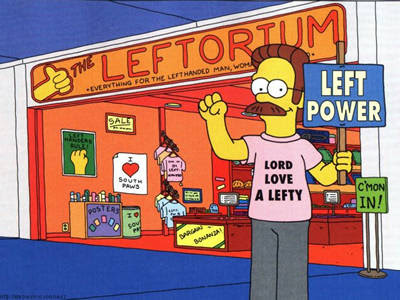 It has been said "Researchers say that left-handed people excel in music, arts, and math; but lack ability in language and speech." Barack Obama is left handed. Will he fit into the generality stated above?

LiveScience
Something sinister is going on, and newly-inaugurated President Obama is behind it.

From the Latin for left, "sinistra," southpaw Obama is another notch for the column of left-handed presidents, now totaling eight — a proportion (out of all 43 men who have been POTUS) that is well above their representation in the total population, which hovers around 10 percent.

(Let's count James A. Garfield as a lefty, although some say he was ambidextrous and others say he was a lefty; many ambis are lefties who learn to do some tasks with their right hands.)

In fact, every president since 1974 with the exception of Jimmy Carter and George W. Bush has been left-handed, as is Obama's former Republican opponent Sen. John McCain. Al Gore is too.

Is it just a coincidence, or is there something about being left-handed that can make for a more presidential demeanor?

Some evolutionary advantage, whether overall greater intelligence or language skills, has kept a stable group of lefties for at least the past 200,000 years, said Chris McManus, professor of psychology and medical education at University College London.

There have been lefties for as long as there have humans, historians agree.

Some of the oldest evidence of left-handedness comes from Kenya, where of a 500,000 year-old cache of 54 stone tools made by one of our pre-human ancestors, six (or about 11 percent) were chipped using the left hand. Similarly, Neanderthals working with meat and stone tools more than 150,000 years ago left marks on their teeth at left and right angles – indicating opposite hand use – in almost perfect proportion with today's 9:1 ratio.

Paleolithic cave paintings from France and Spain also hint that lefties walked among our ancestors about 30,000 years ago. Studying a collection of so-called negative hand drawings on the cave walls – similar to tracing one hand with the other – scientists found that individuals drew their left hand much more frequently than the right.

The laundry list of lefties goes on through history, with records telling us that a number of famous ancient figures probably favored their southpaw as well, from Alexander the Great to Charlemagne, Holy Roman emperor.

Though ancient sample sizes are small and poor estimates of the exact proportion of lefties, the existence of left-handedness is clear even hundreds of thousands of years ago, McManus said.

Despite its long history, left-handedness is a uniquely human trait. Chimpanzees and gorillas, with whom we share an ancestor and a number of common physical attributes, don't seem to favor one hand over the other.

Instead, left-handedness may have developed along with another characteristic known just to humans – language.

Most people process language in the left side of their brain, the hemisphere that also controls the right side of the body, and have done so presumably since humans started chatting a few hundred thousand years ago. Whichever gene made the left side of our brains responsible for language also played a role in making our right side dominant, experts such as McManus believe.

Though a specific left-handed gene has yet to be found, the trait to choose one hand over the other is likely inherited, agree scientists. Left-handed parents are far more likely to produce left-handed children, and those children appear to begin favoring that hand in the womb, according to a 2004 study on 10-week-old fetuses.

More recent research suggests that, while developing, the two sides of the brain actually "fight" for specialized control of certain functions, such as handedness, with the left side (which controls the right — are you following?) more often coming out on top.

That preferential wiring may make lefties more adept at certain skills required for leadership according to McManus, who wrote about his theories in his book "Right Hand, Left Hand" (Harvard University Press; 2002).

But what about "left-handedness" and the sciences?

That would be an interesting correlation between human activity. Statistics on this would be like what is the depression rate of physicists. And I am not sure what sort of results would be gathered other than curiosity. How bizarre to discover that there is a positive correlation between "left-handed" people and the sciences. Would there be a cultural community of people developed whereby left-handed people only did science. Is such a situation true in all cases? What about those that retired the left hand usage and switched to right-handedness? Or those that are ambidextrous? One would certainly not draw the conclusion that such a situation is categorical for if a right-handed person lost the use of that appendage and was forced to use the left arm that would not necessarily means a sudden interest in science. For me, I was left-handed until six or seven and switched. The world did little to accommodate left-handed children then. Those early days did not prodivde individual desks designed for the left-handed. They were never positioned in seating arrangements that would prevent passing by individuals from bumping into them. Special tools? There are some specialized tools for wood crafts and my left-handed friend has scissors especially designed for her. I don't imagine that there are many industries that are geared especially for left-handed products. Sometimes social stigmas develop in that the function of a society is favoring the majority. Frankly, it doesn't make any difference: Left, right, both. But the correlation between specific brain functions and being left or right-handed is interesting. In the long run such a correlation would be like saying that there is a relationship between scientists and scientists having a fondness for peanut butter or oatmeal. It is interesting though. It may well have something due to the physical structure and activity of the brain.

I seriously doubt that one will find a correlation between "left-handedness" and the sciences and I am not sure of its relevancy. However, there is quite a bit of history involving the dominance of one hand over the other. Through out history the stance and social significance of a dominating hand is interesting for there has been not to long ago a stigma placed on left-handedness and a long, long time ago there was a premium placed on left-handedness. It is interesting to note that all primates except man are ambidextrous, namely orangutans, chimpanzees, and apes will use either hand while man is the only one making a selection. Many very early forms of writing were written left-handed, reading from right to left. And it wasn't until Greek times did things switch the other way. A curious illustration is in early cave paintings where figures were facing right indicating a left-handed artist. Warfare would favor, in situations of one-on-one combat, a right-handed person inflicting wounds/death while the left hand was busy protecting a vital organ--the heart. Mortality among left-handed warriors must have been high and were soon converted or put in charge of logistics or to become scribes. Data for correlations of dominate hands [or eyes or feet] to science oriented people are zip and subject to much speculation. The unlucky to lucky position of hand dominance will probably shift again and again. Interesting to note that Beethoven, Goethe, Michelangelo were left-handed and that I doubt that gender plays any significant role.

From: Total Man: An Evolutionary Theory of Personality, by Stan Gooch:

Here is what he said about the position of the heart:

So, it could well be an evolutionary phenomena on a very short scale of evolution. And, other than the combat situation mentioned above there are surly sociological reasons too.

The ambidextrous feature is interesting and I have read some rather unusual hypotheses regarding why there is favoritism of left or right-handedness. It is believed that all humans are born ambidextrous and through sociological favoritism [a cultural posture fostered by popular determinism], human sense of balance [the human body may be off centered favoring a particular stance], brain functions, external physical forces--who knows why. Told ya, some of the above are bizarre. Interesting to note that the majority of animals are ambidextrous though some species [certain primates] may favor the right hand. It probably doesn't matter much to the squirrel gathering fall’s fruit of black walnuts--they can snatch the nut with either paw with alacrity. However, it may well be advantageous for humans to be ambidextrous. Sometimes, certain situations may require a clever non-dominate hand for assistance.

Does all of this make any difference whether one is left-handed, right-handed, ambidextrous--right or left foot dominate or right or left eye dominate? Perhaps a quirk of nature. In any case things can be performed with alacrity and deft skill in any case, granting ambidexterity having the edge.

Here's a quote by Ambrose Bierce:

Ambidextrous, adj.: Able to pick with equal skill a right-hand pocket or a left.

It is always convenient to select anomalies and groom data to support any hypothesis or obscure detail of an individual or group. Motivations are numerous: To perpetuate myths, degrade/humiliate, or the scapegoat mentality. It makes no difference if one is talking about left or right-handedness, race, culture, or intelligence for someone or some group will be singled out for ulterior motives. As far as hand dominance is concerned, even though there are some curious historical examples and plausible explanations, the net result is rather insignificant and in the long run assist only those that desire to profit from lefties with specialized products.