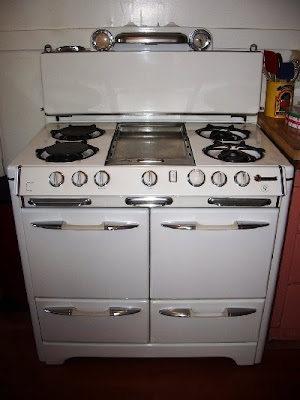 "At the Stove, a Dash of Science, a Pinch of Folklore"

The New York Times
My mother, when she still cooked, always added a dash of sugar to the vegetables she stir-fried. She said it preserved the bright green of the greens. I always thought that was hooey.

Shirley O. Corriher, a biochemist turned folksy food scientist who was sitting at my dining table, said she had not heard of this — but added that sugar does do more to fruits and vegetables than add sweetness.

It also helps preserve their shape. Heat shrinks the plant cells and transforms molecules in the cell walls into pectin, which dissolves. "The cells are falling apart and leaking," said Ms. Corriher, who dissected the science of recipes in her books "Cookwise" and "Bakewise."

"It's mass death and destruction when you heat a fruit or vegetable," she said.

Adding sugar helps keep the glue between the cells intact, she said. "It's preventing the leaking of the acid."

I had invited Ms. Corriher and her husband, Arch, who were in New York from Atlanta for a visit, to dinner to help answer some kitchen curiosities. Cookbooks bark out instructions like boot camp orders — Add oil to pasta water! Salt the eggplant! Brown meat to seal in juices! — and legions of home cooks obediently follow them.

I wondered how many of these truisms had a scientific underpinning and how many were but myths. Browning meat, for instance, does not seal in juices. The char adds flavor, though.

For a second opinion, I later called Harold McGee, who is the author of the food science bible "On Food and Cooking" and who writes "The Curious Cook" column in The Times's dining section.

Ms. Corriher's answer about sugar and vegetables has a factual basis. "Beans are a wonderful example of this," she said. "If you take beans, like Navy beans, cook them for four to six hours, they’re mush refried beans. But if you add sugar and molasses, you can cook them for days. They’re Boston baked beans."

Molasses has calcium, and Boston baked beans call for prodigious quantities of sugar and molasses. The sugar absorbs some of the water, slowing how fast the beans dissolve, and the calcium molecules reinforce the cell walls by linking together with the pectin.

As I grilled shrimp and garlic in a hot cast-iron pan, I asked: should one heat the cooking oil and pan at the same time or heat the pan before adding oil?

Heat the empty pan and then add oil, Ms. Corriher said. And whatever you do, she said, do not add the food when both the pan and oil are cold. That came from her attempts to scramble eggs at a boarding school that she and her first husband ran in the 1960s. "That liquid protein was going down in any nook and cranny in the pan and then you turned on the heat and literally you cooked the food into the pan," she said. "But if you got a hot surface, the food cooks on the surface, not in the surface."

Next dish: roasted brussels sprouts with bacon, browned on the stove in a cast-iron skillet and then roasted in the oven. The dish turned out fine, but I had unknowingly and luckily avoided producing a rotten egg stink. Brussels sprouts — and other vegetables of the Brassica family, including cabbage — release hydrogen sulfide as they cook, particularly when boiled for too long.

"Between five and seven minutes, they double in stinky hydrogen sulfide gas formed," Ms. Corriher said. My browning of the brussels sprouts on the stovetop was shorter than that. In the oven, the transfer of heat from hot air to vegetable occurs more slowly than immersion in boiling water.

A duck leg basted with a soy sauce-rice wine-garlic-ginger-honey sauce provided another lesson in browning.

In addition to adding sweetness, the honey helped brown the duck skin, taking advantage of chemical reactions described by Louis-Camille Maillard a century ago. In the Maillard reaction, at high temperatures, fructose and glucose in the honey reacts with amino acids in the duck, producing a variety of new molecules that add flavor and color.

Ms. Corriher offers this advice for imbuing roast turkey with a rich golden hue: baste it with honey or corn syrup, which is also full of fructose and glucose. These are so-called reducing sugars, which means they have a structure — "a funny tail," Ms. Corriher called it — known as a carbonyl group that takes part in the Maillard reaction. (Sucrose is not a reducing sugar, which is why sugar water does not brown the same way.)

Maillard reactions also produced the dark char on the slab of steak I turned to next. Where's the sugar in a steak? Animal cells contain glycogen, essentially the animal version of starch, which the cells use for storing energy. After the animal is killed, glycogen falls apart into glucose.

As I cooked, the smoke set off the fire alarm. No chemical mystery there: Where there's fire, there's smoke.

For a Chinese chili-braised fish recipe, taken from "Land of Plenty" by Fuchsia Dunlop, the first step calls for marinating the fish in rice wine for several minutes. That struck me as pointless. If you are about to braise a fish in tongue-searing chili sauce, what’s the point of soaking it in wine? The alcohol boils away, and the spiciness ought to obliterate any taste of the wine.

She recalled Patricia Wells, the Paris-based food writer, asking about the vodka in penne alla vodka: "She said, 'Shirley, why is it that a little vodka in a tomato sauce makes such a huge difference in the taste of the sauce? I boil it after the vodka is added so most of the vodka is gone.' But there's obviously a compound in tomatoes that alcohol dissolves and pulls out into the sauce. And then it doesn’t matter what happens to alcohol. It's done its job."

Mr. McGee agreed with the wine-as-solvent hypothesis, but suspected it was used for the exact opposite reason, to wash off-flavors off the fish. "It's a kind of post-washing cleansing," he said.

(I e-mailed Ms. Dunlop to ask the intended purpose of the wine. Mr. McGee was correct. "The purpose of marinating the fish in salt and wine is to 'qu xing wei' — to dispel so-called 'fishy flavors' (xing wei)," Ms. Dunlop wrote in an e-mail response. "This is a major preoccupation for Chinese chefs and home cooks.")

As for the sugar in stir-fried vegetables, Ms. Corriher decided after some thought that my mother's technique might make some sense. If the sugar slowed the release of acids, perhaps that would help preserve color as well as shape.

Mr. McGee disagreed. "A fraction of a teaspoon is a homeopathic dose," he said. But he added, he did not know for certain. Cooking is chemistry, and the only way to know for sure would be to employ the scientific method.

"If I had been her in your apartment, I would have said, 'Let's do an experiment,'" Mr. McGee said. "We have different interpretations, and an experiment would clarify who was right."