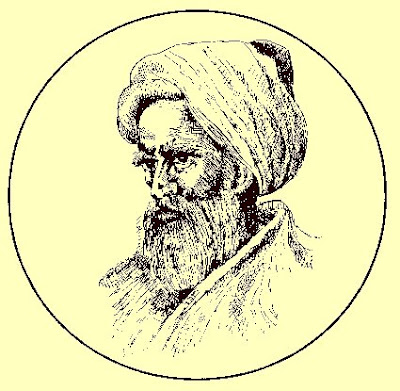 BBC NEWS
Isaac Newton is, as most will agree, the greatest physicist of all time.

At the very least, he is the undisputed father of modern optics,­ or so we are told at school where our textbooks abound with his famous experiments with lenses and prisms, his study of the nature of light and its reflection, and the refraction and decomposition of light into the colours of the rainbow.

Yet, the truth is rather greyer; and I feel it important to point out that, certainly in the field of optics, Newton himself stood on the shoulders of a giant who lived 700 years earlier.

For, without doubt, another great physicist, who is worthy of ranking up alongside Newton, is an Iraqi scientist born in AD 965 who went by the name of al-Hassan Ibn al-Haytham.

Most people in the West will never have even heard of him.

As a physicist myself, I am quite in awe of this man's contribution to my field, but I was fortunate enough to have recently been given the opportunity to dig a little into his life and work through my recent filming of a three-part BBC Four series on medieval Islamic scientists.

Popular accounts of the history of science typically suggest that no major scientific advances took place in between the ancient Greeks and the European Renaissance.

But just because Western Europe languished in the Dark Ages, does not mean there was stagnation elsewhere. Indeed, the period between the 9th and 13th Centuries marked the Golden Age of Arabic science.

Great advances were made in mathematics, astronomy, medicine, physics, chemistry and philosophy. Among the many geniuses of that period Ibn al-Haytham stands taller than all the others.

Ibn al-Haytham is regarded as the father of the modern scientific method.

As commonly defined, this is the approach to investigating phenomena, acquiring new knowledge, or correcting and integrating previous knowledge, based on the gathering of data through observation and measurement, followed by the formulation and testing of hypotheses to explain the data.

This is how we do science today and is why I put my trust in the advances that have been made in science.

But it is often still claimed that the modern scientific method was not established until the early 17th Century by Francis Bacon and Rene Descartes.

There is no doubt in my mind, however, that Ibn al-Haytham arrived there first.

In fact, with his emphasis on experimental data and reproducibility of results, he is often referred to as the "world's first true scientist".

He was the first scientist to give a correct account of how we see objects.

He proved experimentally, for instance, that the so-called emission theory (which stated that light from our eyes shines upon the objects we see), which was believed by great thinkers such as Plato, Euclid and Ptolemy, was wrong and established the modern idea that we see because light enters our eyes.

What he also did that no other scientist had tried before was to use mathematics to describe and prove this process.

So he can be regarded as the very first theoretical physicist, too.

He is perhaps best known for his invention of the pinhole camera and should be credited with the discovery of the laws of refraction.

He also carried out the first experiments on the dispersion of light into its constituent colours and studied shadows, rainbows and eclipses; and by observing the way sunlight diffracted through the atmosphere, he was able to work out a rather good estimate for the height of the atmosphere, which he found to be around 100km.

In common with many modern scholars, Ibn-al Haytham badly needed the time and isolation to focus on writing his many treatises, including his great work on optics.

An unwelcome opportunity was granted him, however, when he was imprisoned in Egypt between 1011 and 1021, having failed a task set him by a caliph in Cairo to help solve the problem of regulating the flooding of the Nile.

While still in Basra, Ibn al-Haytham had claimed that the Nile's autumn flood waters could be held by a system of dykes and canals, thereby preserved as reservoirs until the summer¹s droughts.

But on arrival in Cairo, he soon realised that his scheme was utterly impractical from an engineering perspective.

Yet rather than admit his mistake to the dangerous and murderous caliph, Ibn-al Haytham instead decided to feign madness as a way to escape punishment.

This promptly led to him being placed under house arrest, thereby granting him 10 years of seclusion in which to work.

He was only released after the caliph's death. He returned to Iraq where he composed a further 100 works on a range of subjects in physics and mathematics.

While travelling through the Middle East during my filming, I interviewed an expert in Alexandria who showed me recently discovered work by Ibn al-Haytham on astronomy.

It seems he had developed what is called celestial mechanics, explaining the orbits of the planets, which was to lead to the eventual work of Europeans like Copernicus, Galileo, Kepler and Newton.

It is incredible that we are only now uncovering the debt that today's physicists owe to an Arab who lived 1,000 years ago.

Well over 100 works including Opticae thesaurus [The Treasury of Optics] published in 1572. Oxford University Press..."This was widely studied and extremely influential. It was the first authoritative work to reject the curious Greek view that the eye sends out rays to the object looked at."

Born in Basra in 965, Ibn al-Haytham first studied theology, trying unsuccessfully to resolve the differences between the Shi'ah and Sunnah sects. He then turned his attention to the works of the ancient Greek philosophers and mathematicians, including Euclid and Archimedes. He completed the fragmentary Conics by Apollonius of Perga. He was the first person to apply algebra to geometry, founding the branch of mathematics known as analytic geometry.

A devout Muslim, Ibn al-Haytham believed that human beings are flawed and only God is perfect. To discover the truth about nature, he reasoned, one had to eliminate human opinion and allow the universe to speak for itself through physical experiments. "The seeker after truth is not one who studies the writings of the ancients and, following his natural disposition, puts his trust in them," he wrote, "but rather the one who suspects his faith in them and questions what he gathers from them, the one who submits to argument and demonstration."

In his massive study of light and vision, Kitâb al-Manâzir (Book of Optics ), Ibn al-Haytham submitted every hypothesis to a physical test or mathematical proof. To test his hypothesis that "lights and colors do not blend in the air," for example, Ibn al-Haytham devised the world's first camera obscura, observed what happened when light rays intersected at its aperture, and recorded the results. Throughout his investigations, Ibn al-Haitham followed all the steps of the scientific method.

Kitâb al-Manâzir was translated into Latin as De aspectibus in the late thirteenth century in Spain. Copies of the book circulated throughout Europe. Roger Bacon, who is sometimes credited as the founder of modern science, wrote a summary of it entitled Perspectiva (Optics).

Ibn al-Haytham conducted many of his experiments investigating the properties of light during a ten-year period when he was stripped of his possessions and imprisoned as a madman in Cairo. How Ibn al-Haytham came to be in Egypt, why he was judged insane, and how his discoveries launched the scientific revolution are just some of the questions answered in Ibn al-Haytham: First Scientist, the world's first biography of the Muslim scholar known in the West as Alhazen, Alhacen, or Alhazeni.

The critics are not the only ones recommending the book; buyers of the book are lauding it as well. Abdul Jabbar Al-Shammari, the director of the Ibn al-Haytham Center for Science and Technology in Amman, Jordan, writes: "I enjoyed reading about the events in the life of the famous scientist, Ibn al-Haytham. I congratulate you on writing a fantastic and accurate book." E. Salik of Los Angeles writes: "I recently read Steffens' book on Ibn al-Haytham. This is one of the best books I have ever read. His comments on historical data are commended."

The book with sample chapters... 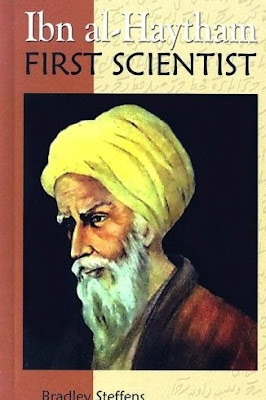