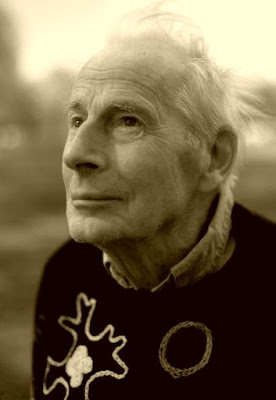 Arne Naess
January 27th, 1912 to January 12th, 2009
Most humans, and governments, are short sighted and only look down the road for a few feet. Perhaps results and gratification are measured in individual life spans...we just cannot wait for external input. But it does take a visionary to look miles down the road and be satisfied that efforts of change will extend beyond one's life time. Arne Naess was such a person that sought long-range solutions to environmental issues...Band-Aid approaches were unacceptable.

"For example, a deep ecologist would clean up a pond because plants and animals deserve a pristine habitat and the woods should be allowed to evolve at their own rate. A shallow ecologist would preserve the pond so his children have a place to swim and the watershed quality improves."

Naess coined the term 'deep ecology' to indicate that humans are no more important than other species, ecosystems or natural processes.

Los Angeles Times
Arne Naess, a Norwegian philosopher who coined the term "deep ecology" to indicate that humans are no more important than other species, ecosystems or natural processes, died Jan. 12 in Oslo. He was 96.

Naess founded the deep ecology movement in 1973 after years of environmental activism and thinking.

Deep ecology says the living environment as a whole has the same right as humans do to flourish. In contrast, "shallow ecology" fixes on short-term technological answers to environmental concerns. Although the two ideas can coexist, Naess argued that only a "deep" transformation of modern society can head off ecological ruin.

The philosophy drew adherents as diverse as the radical Earth First! activists of the late 1980s and Douglas Tomkins, co-founder of the Esprit clothing line.

The ideas of deep ecology quickly became foundational, absorbed into the thinking of activists and policymakers, said Andrew Light, director for global ethics at George Mason University and a senior fellow at the Center for American Progress.

"Naess presented us with a way of approaching problems that will continue to be used in environmental work," Light said. "That is, look for the real origins of environmental problems and not just their surface impact."

For example, a deep ecologist would clean up a pond because plants and animals deserve a pristine habitat and the woods should be allowed to evolve at their own rate. A shallow ecologist would preserve the pond so his children have a place to swim and the watershed quality improves.

Naess urged deep ecologists to work with those who didn't completely share their worldview, often noting "the frontier is long."

Born in Oslo on Jan. 27, 1912, Arne Dekke Eide Naess did undergraduate work at the Sorbonne in Paris and graduate work at the University of Vienna, UC Berkeley and the University of Oslo, where he received his doctorate in philosophy in 1938. The next year, he became the university's youngest professor and made the history of ideas a prerequisite for all academic specialties.

An outdoorsman from a young age, he led the first expedition to conquer the 25,000-foot Pakistan mountain Tirich Mir in 1954 and led another Norwegian expedition up the mountain in 1964.

He wrote many books on communication and was among the first to use statistical methods and questionnaires to survey philosophical beliefs.

During World War II, he joined the Norwegian resistance and helped avert the shipment of students to German concentration camps. During the 1960s, he became involved in environmental activism and was once arrested for nonviolent civil disobedience at a waterfall where a dam was planned. He also wrote a manual to help activists who were involved in nonviolent protests. In 1958, he founded an interdisciplinary journal of philosophy called Inquiry.

He retired from his university job in 1970 and began examining humanity's relationship with nature. Inspired by environmentalist Rachel Carson, Indian philosopher of nonviolence Mahatma Gandhi and metaphysician Baruch Spinoza, he argued that all living things have value independent of their usefulness to others, but he rejected the kind of individualism that leads to selfishness toward other beings and nature.

He later amended the philosophy, and deep ecology became a collection of eight basic principles, which valued life in all forms, asserted that diversity is a value in itself and required those who agreed to work for change.

In a 1995 interview for a documentary film about him, "The Call of the Mountain," he described himself as a short-range pessimist and a long-range optimist.

"I am, to the astonishment of certain journalists, an optimist," he said. "But then I add, I am an optimist about the 22nd century. And they say: 'Oh, you mean the 21st . . . ' 'No, 22nd century!' I think that in the 21st century, we have to go through very bad times and it will hurt even rich countries. Now it is all sailing smoothly -- but it will hurt the rich."

A documentary film, The Call of the Mountain, was made about Arne Naess...here is an excerpt.