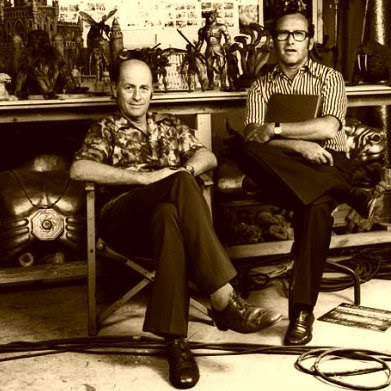 Ray Harryhausen, left, and Charles H. Schneer sit in front of several of Ray's designs about the time of the release of "Sinbad and the Eye of the Tiger" in 1977.

Charles H. Schneer
May 5th, 1920 to January 21st, 2009
"In addition to producing most of Harryhausen's films, Schneer produced the biographical film "I Aim at the Stars," on the life of physicist Wernher von Braun...."

Schneer, the producer of 25 films, was best known for his collaboration on several movies with special effects genius Ray Harryhausen.

Schneer died Wednesday at a hospice in Boca Raton, Fla., according to his daughter Stacey Schneer Lee. Schneer, who most recently had been living in Delray Beach, Fla., had been ill for several years, his daughter said in a news release.

Schneer was the producer of 25 films, including "Hellcats of the Navy," the only film to star Ronald Reagan and Nancy Davis, the future president and first lady.Schneer began his three-decade partnership with Harryhausen in 1955 with the fantasy film "It Came From Beneath the Sea" about a giant octopus that destroys the Golden Gate Bridge. The idea for the film, with stop-motion animation by Harryhausen, was Schneer's.

"Charles and Ray were an ideal couple. They were both enthusiastic about doing fantasy films at a time when fantasy films were not being taken seriously by the studios," Arnold Kunert, Harryhausen's agent and close friend, told The Times. "Schneer, in his wisdom, believed in Ray's talent as a stop-motion animation artist."

According to Harryhausen's website, by the end of the 1950s the two men had made a conscious break away from science fiction and embraced the fertile world of fantasy, myth and fairy tales.

"He functioned as a producer in the best sense of producing," said film critic and historian Leonard Maltin. "Ray is an artist, and creative people like that really need someone to facilitate the business end of things so they can focus on what they do best. That's how their partnership thrived."

But according to Kunert, Schneer was more than just the money man. He was heavily involved in the creative end.

"Charles had a habit of going through the newspaper and clipping out ideas from feature stories about extraterrestrials and unusual phenomena," Kunert said. "He brought the idea for 'Earth vs. the Flying Saucers' to Ray's attention, and Ray came up with the artwork and worked on the story and, of course, created all the visual effects. Charles was a collaborator in many ways."

In the preface to his book "Ray Harryhausen: An Animated Life," written with Tony Dalton, Harryhausen said Schneer's enthusiasm for making movies was "unbounded" and called his longtime friend "the unsung hero" of his career in films.

"He would supply the practical element . . . and always knew what would work and what wouldn't," Harryhausen wrote. "Without his help and foresight, much of what we planned together would not have seen the light of day."

Schneer was born May 5, 1920, in Norfolk, Va., but spent some of his youth growing up in Mount Vernon, N.Y. He graduated from Columbia University and started his career at Columbia Pictures. During World War II he produced training films as a member of the U.S. Army Signal Corps Photographic Unit stationed on Long Island.

In addition to producing most of Harryhausen's films, Schneer produced the biographical film "I Aim at the Stars," on the life of physicist Wernher von Braun, one of the leading figures in the development of the U.S. space program. He went on to produce the film version of the musical "Half a Sixpence" starring Tommy Steele.

Schneer moved to London in 1960, where he remained for the next 45 years, relocating to Florida in 2005. Besides filmmaking, he chaired the London events committee for the Academy of Motion Picture Arts and Sciences, of which he was an active member.

In addition to his daughter Stacey and another daughter, Lesley Silver, he is survived by his wife of 68 years, Shirley; his sister, Babette Schneer Katz; three grandchildren; and four great-grandchildren. 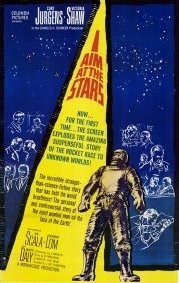 I Aim at the Stars

"Screen: About von Braun: I Aim at the Stags' Opens at the Forum"

The New York Times
HOWEVER one may think or feel emotional about the case of Dr. Wernher von Braun, Hitler's former V-2 rocket expert who is now an American citizen and head of our George G. Marshall Space Flight Center, one is not likely to have one's attitude changed by "I Aim at the Stars." This Columbia film drama about the scientist opened at the Forum yesterday.

In the way of examination of the ethical reasoning by which the fabricator of the Nazis' deadliest missiles is now warmly accepted on our side, the film is conspicuously fuzzy and takes its stand on the none too certain ground that Dr. von Braun's driving interest from boyhood was simply to develop rockets that could reach out into space.

The possibility of reaching intently into the depths of his scientist's mind and comprehending his certainly complex motivations is not achieved in this poorly written film. Anyone looking for clear, white light on his personal drama will not find it in "I Aim at the Stars."

At the same time, the balance of feeling for or against Dr. von Braun is not likely to be tipped in either direction by the peculiar emotionalism in this film. From the beginning he is held up as a hero, a dedicated space pioneer, who is misunderstood by his parents, by his fiancée, by the German ordnance engineers and by the S. S. chief, Heinrich Himmler, who tries to make him out an enemy of the Third Reich.

But, particularly, he is suspected and angrily and viciously reviled by an American Army officer who has lost his wife and child in the London V-2 raids. In Germany and later in America, this officer badgers Dr. von Braun until the latter assists in launching our first Explorer satellite into space. Then he generously hails the scientist as the faultless hero he has been made to appear.

Obviously, this making a "heavy" of a character who loudly articulates the understandable emotional attitude of many Americans and British toward former Nazi scientists will not assist in changing whatever feeling the resentful may have about Dr. von Braun.

Nor is the performance of Curt Jurgens in the principal role likely to agitate much sympathy for the scientist. His Dr. von Braun is a stolid, generally uncommunicative man who looks toward the sky without expression and only once or twice gets mad. He even stares stolidly at his pretty fiancée, played flabbily by Victoria Shaw.

As to the other qualities of the picture, it is a sluggish and plot-logged affair in which a pretty German secretary of the hero turns out to be a British spy who takes up with the angry American major and follows the transplanted missile scientists right through to Cape Canaveral. She is played by Gia Scala, stiffly and solemnly. James Daly plays the major and Herbert Lom is a Nazi scientist who won't desert.

Except for some actuality pictures of V-2 rockets going berserk off their pads and a gratifying sequence showing the bombing of the Nazi rocket launching base at Peenemuende, there is little in this made-in-England drama to interest or convince anyone. Its synthetic brand of hero worship may be annoying and offensive to some.

I AIM AT THE STARS, screen play by Jay Dratler, from a story by George Froeschel. U. Wolter and H. W. John; directed by J. Lee Thompson; produced by Charles H. Schneer and presented by Columbia Pictures. At the Forum Theatre. Broadway and Forty-seventh Street. Running time: 107 minutes.