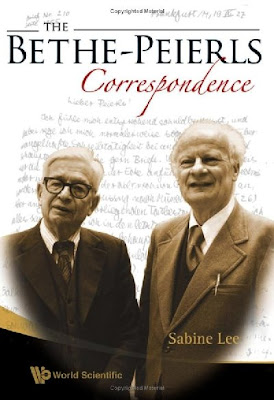 This book contains the correspondence between Hans Bethe and Rudolf Peierls, two first-rate scientists who made important contributions to 20th century physics. The document collection is of great significance for our understanding of 20th century physics, but it also illustrates many interesting political and social aspects such as the life of émigré scientists from Nazi-Germany on both sides of the Atlantic and the political activities of nuclear scientists after the development of the atomic bomb. Furthermore, the letters exchanged between Bethe and Peierls facilitate the appreciation of information transfer between Europe and the US and they shed light on mechanisms of higher education and academic research. Spanning almost seven decades, this almost uninterrupted correspondence is a unique source of 20th century history.


Hans Bethe...physicist's physicist
Posted by Mercury at 9:15 AM