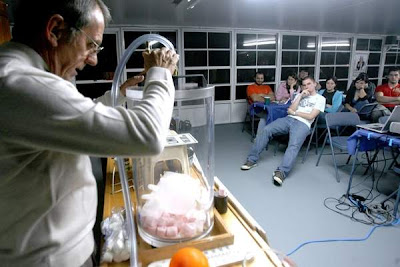 Ken Stage, curator of the St. George Observatory in Schriever, shows what happens in a space vacuum during a Friday night demonstration at the facility. The students learned about the different wavelengths of light and were able to see the Orion Nebula through a telescope.

DailyComet.com
The vacuum chamber is loaded with a bag full of strawberry marshmallows and an inflated rubber glove.

It's time for the fun to begin.

Right here in Terrebonne Parish is this gateway to the stars, not the Hollywood kind but the ones that twinkle and, to hear those properly informed tell it, do a whole lot more.

And it is in this place, one of a handful of astronomical observatories in Louisiana, that a group of Nicholls State University students have chosen to be on a Friday night, gazing rather than guzzling, and learning about how marshmallows and the glove relate to scientific mysteries.

"Looking at the stars and the shapes they make, it's something I've always dreamed of doing," said Neha Chiterakar, a 19-year-old business major from Nepal.

Chiterakar said she's fascinated by the constellations visible in the Schriever sky.

But the star-gazing and learning could have a limited run.

The booming expansion that has led to healthy Houma-Thibodaux economies also threatens the future of this cosmic lovers’ haven, the St. George Observatory, run by amateur astronomer Ken Stage.

A phenomenon called light pollution -- caused by undirected, too-bright outdoor lighting that scatters and illuminates the night sky -- makes it difficult to see the stars.

"The game is all about light," Stage has said. "The blacker the sky, the more you can see."

But on this night the focus is on lights far beyond the skies rather than those which threaten the view beneath them, as members of the Chi Alpha Christian Fellowship gather for one of the routine get-togethers for Nicholls students -- gatherings that sometimes includes those from other nations.

The chief topics of discussion are the many mysteries of the universe.

Stage uses an experiment to tell the story of Joseph Kittinger, an Air Force pilot who has visited his observatory and currently holds records for the highest balloon ascent, highest parachute jump and the fastest falling speed through the atmosphere by a human.

"He is the only man to this day who has broken the speed of sound," Stage says, explaining that Kittinger stepped out of an open-air gondola attached to a helium balloon at a height of 102,800 feet. "Imagine the blackness of space above you and the earth below you."

In making his mark, Kittinger tore open the glove on his special protective suit. The pressure caused his hand to swell twice its normal size.

Stage demonstrates the phenomenon via a vacuum chamber. Sealing the chamber and cranking it like a mad scientist, the glove inflates until it looks like it will burst.

The marshmallows, meanwhile, freeze dry as air and moisture are squeezed out.

The students are invited to try the shrunken marshmallows, something they do to mixed reviews.

Stage calls himself an "unabashed Christian" who believes the mysteries and wonders of science leave a lot of room for faith.

The big bang theory, he added, which is accepted by many scientists today as the origin of the universe, was conceived by a Roman Catholic priest and physicist named Georges Lemaître.

Stage schools the university students on a number of astronomical basics, from the visible-light spectrum to distant galaxies.

An avowed astronomy buff, Stage began converting his two-and-a-half acre backyard into an observatory nearly 10 years ago, complete with a lecture hall and mobile unit that he takes to local schools.

At the facility, off the main highway in rural Terrebonne, in an area where skies are mostly dark enough to admire the galaxies, he hosts students of all ages, as well as professional astronomers.

You'd have to travel to Louisiana State University in Baton Rouge to have access to similar space-watching tools, but the city lights of the capital make it harder to stargaze, Stage said. Most observatories are on mountain tops in remote areas of the country.

In Schriever, Stage spends much of his time praying for clear skies.

He hosts night field trips to allow students a chance to peer through one of his four professional, custom-built telescopes, explaining his "primary hope and desire" is to share his awe of the universe, a love of science and intellectual curiosity in local youngsters.

On Friday, his plan seemed to be working.

Kamala Dimalshina, 19, a Nicholls accounting major also from Nepal, used one of Stage's telescopes to photograph the Orion nebula.

Stage, an advocate of all things astronomical, aims to keep providing locals the information and tools they need to explore the heavens for as long as it remains possible.

St. George Observatory
Posted by Mercury at 7:05 AM