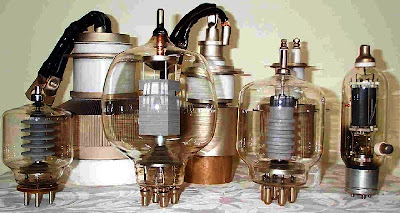 I wonder if Thomas B. Greenslade Jr. knows Richard Zitto...a fellow science instrument collector. When I was working in radio, the station needed to replace the transmitter's broadcasting vacuum tube. Egads, $20,000. Wish I had it and my whole vacuum tube collection back.

"Antique devices get his heart pumping"

The Columbus Dispatch
When Thomas B. Greenslade Jr. is talking about his collection of antique scientific instruments, it's best to hang on tight.

He speaks in a flurry of "horizontal galvanometers" and "double reciprocating motors," with a lot of "oh, by the ways."

When I asked about one device, his answer encompassed X-rays, Australia and the fact that the world has four places named Gambier, all of them named for "a very boring, extremely pious and rather inept British admiral."

The man knows his stuff.

Greenslade, a retired physics professor at Kenyon College in Gambier (the one in Ohio), is an expert on scientific apparatus built between 1850 and 1950. The Smithsonian comes to him for information.

He is a sort of rescue service for vintage oscillators, induction coils and magnetometers. College physics departments call him when they're cleaning out their attics.

How did he get a vacuum pump from Westminster College in Pennsylvania?

How about an 1880s direct- current meter? Someone at West Virginia University gave it to him, lest it be tossed in the trash.

Greenslade taught physics at Kenyon for 41 years before retiring (for the second time) in 2005. He and his wife, Sonia, still live on the edge of campus in a house with one large room devoted solely to his extensive collection.

It has proved visually arresting enough to attract the attention of artists. Several of Greenslade's devices are featured through Feb. 28 in a small exhibit in the Olin Art Gallery in the Kenyon College library.

The exhibit, by Gary Nickard and Reinhard Reitzenstein, both art professors at the University at Buffalo, combines objects from science, art and nature. It's a 21st-century take on wunderkammern, which were Renaissance-era collections of curiosities from throughout the world.

"He has probably one of the most formidable collections of antiquarian physics instruments that I've ever seen. It was mind-blowing."

The artists picked the devices solely for their beauty, then displayed them with birds' nests and sculptures. So one of Greenslade's instruments has a stylized insect resting on top and a nest nearby. As we studied the display, the professor said he gets it -- sort of.

"At this point, I realize that the scientific mind doesn't understand the artistic mind, and the inverse is true. But we coexist very nicely."

Then he was off to the next device, a string driver. Within a minute, he had explained what it was (a device for studying wave properties), who made it (James Queen of Philadelphia), and when (about 1890). And then he added, "Oh, by the way . . ."