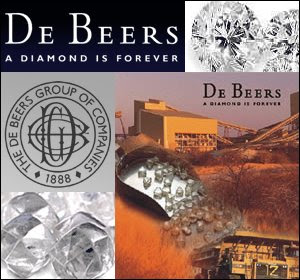 Tiffany, the famed jewelry chain on Fifth Avenue in New York, is struggling even after lowering prices. In Botswana, at one of the biggest diamond mines in the world, the effects are being felt by workers who have been told to remain on an extended Christmas vacation to help De Beers, the giant producer, adjust to the sudden slump.

After enjoying more than two decades of almost uninterrupted price increases amid buoyant demand, the global diamond business is suffering along with many other luxury businesses. Retail sales dropped as much as 20 percent over the year-end holidays in the United States, which is responsible for about half of the world’s demand for diamonds.

But the industry is different from other luxury businesses because it is based on a commodity. And that commodity is no longer entirely under the control of De Beers, which used to be able to maintain high diamond prices by restricting supply.

Hopes that the growing wealth in India and China would fill the demand gap were dashed once recession spread to Asia, prompting prices for diamonds to drop by roughly 30 percent from an August peak.

"The whole industry has stalled as it has been hit by the recession," said Christine Gordon, an independent diamond industry analyst in London. "This is going to go on for a while and in the meantime production cuts will be necessary."

De Beers, the world’s largest diamond producer, said Friday that sales in the fourth quarter slowed and that 2009 would remain "challenging."

Strong demand for diamonds in the first three quarters of last year helped De Beers increase yearly sales to $6.89 billion, from $6.84 billion. But sales in November and December were "below expectations," Gareth Penny, the company’s group managing director, said.

As recently as September, De Beers could not get diamonds out of the ground fast enough. But since the financial crisis took a sharp turn for the worse after the bankruptcy of Lehman Brothers in mid-September, De Beers has had to reduce production by shortening workweeks, introducing more flexible hours and shifting workers away from digging to mine maintenance.

De Beers, in which the mining giant Anglo American owns a 45 percent stake, controls about 40 percent of the diamond market. The company said in January that it would reduce the production of rough gems by about 50 percent through April.

A De Beers unit also recently shelved a deal to acquire half of a Russian gem miner because of the financial crisis; another subsidiary just terminated a production agreement at a mine in South Africa.

But the seeds of the diamond industry’s troubles were planted even before the downturn, as producers accumulated a large inventory and took on excessive debt.

The production overhang is mainly the result of a strategic change at De Beers about 10 years ago. When Cecil Rhodes, the swashbuckling British-born businessman, founded De Beers in the 19th century, the company established a tight grip on the diamond market and kept the price of diamonds on a steady upward arc by buying excess supply.

The system worked wonders for decades but became unsustainable as competition from smaller miners increased and demand for other luxury goods replaced consumer appetite for gemstones. De Beers changed its strategy and started to sell rough diamonds at 10 annual auctions, but it was still stuck with a stockpile of roughly $4 billion in diamonds.

The immediate outlook is grim. Chaim Even-Zohar, manager of Tacy, an industry consulting firm in Israel, said he expected demand for rough diamonds to decline by at least 60 percent this year, leading to a further price drop of about 25 percent.

Recent price declines prompted Angola and other countries whose economies rely heavily on the industry to consider buying diamonds to keep them off the market. Indeed, Russia has already bought some products from Alrosa.

In Botswana, where the mining giant Debswana is a joint venture between De Beers and the government, lawmakers have warned of the devastating effects a mine closure or a fire sale of assets could have on the country's economic, social and development projects, since diamonds account for about two-thirds of its exports.

The $20 billion industry is grappling with corporate debt levels that ballooned to a combined $22 billion in 2008. The reluctance of banks to lend coincides with a drop in the value of diamonds that companies use as a security for loans.

The immediate outlook for the industry might look bleak, but some analysts said that once the production overhang worked itself through the system, prices would recover. Without new discoveries, Mr. Even-Zohar expects the world to run out of new diamonds within 20 years.

As demand recovers, any diamond shortage would drive up prices and revive mining. "The long-term fundamentals look good," Mr. Even-Zohar said. "But in the meantime countries and populations will suffer."

Email ThisBlogThis!Share to TwitterShare to FacebookShare to Pinterest
Labels: diamonds