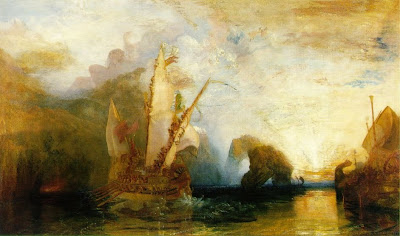 "Researchers hit a homer with 'The Odyssey'"

Using astronomical clues, they date one of literature’s most heralded events: Odysseus’ slaughter of his wife’s suitors. But the finding leaves many questions unanswered.

Los Angeles Times
Delving into a 3,000-year-old mystery using astronomical clues in Homer's "The Odyssey," researchers said Monday they have dated one of the most heralded events of Western literature: Odysseus’ slaughter of his wife’s suitors upon his return from the Trojan War.

According to the study published in the Proceedings of the National Academy of Sciences, the wily hero who devised the Trojan Horse hefted his mighty bow on April 16, 1178 BC, and executed the unruly crowd who had taken over his home and was trying to force his wife into marriage.

The finding leaves many perennial questions unanswered, such as whether the events portrayed actually occurred or whether the blind poet Homer was the author of the tale.

But the results cast a new sheen of veracity on a story that has existed in a hazy realm of fantasy and history since it was first composed 400 years after the Trojan War.

"They make a wonderfully persuasive case," said Scott Huler, author of a book about his efforts to follow Odysseus' journey. "I do find myself convinced that some of these events Homer described" are based on actual history.

"The Odyssey" tells the story of the king's 10-year journey home after the capture of Troy. Odysseus spent seven of those years as a captive of the nymph Calypso, then was delayed another three by Poseidon, who was angered by the blinding of his son Cyclops.

When he finally arrived at Ithaca, he was angered to find 109 men urging his wife Penelope to accept that her husband was dead and marry one of them. Spurred by Athena, Penelope declared an archery contest with Odysseus' bow, saying she would marry the winner.

Odysseus, in disguise, won the contest, then killed all the suitors as well as a dozen maids who had slept with them.

The key passage in dating the tale is highly ambiguous.

As the suitors are sitting down for their noontime meal, the goddess Athena "confounds their minds" so that they start laughing uncontrollably and see their food spattered with blood.

Then the seer Theoclymenus prophesies their death and passage to Hades, ending with the phrase: "The Sun has been obliterated from the sky, and an unlucky darkness invades the world."

The Greek historian Plutarch interpreted this as signifying a total solar eclipse, and many others have agreed. But modern scholars tend to discount this interpretation, arguing that the passage is simply metaphorical.

Previous researchers have determined that a total solar eclipse occurred in the region over the Ionian Sea on April 16, 1178 BC, which would be in agreement with recent data suggesting the fall of Troy around 1192 to 1184 BC.

To investigate, astronomer Marcelo O. Magnasco of Rockefeller University and Constantino Baikouzis of the Observatorio Astrónomico de La Plata in Argentina read the text of “The Odyssey” carefully, looking for other astronomical clues.

The day of the slaughter was a new moon – a prerequisite for a solar eclipse.

Six days before the slaughter, Venus was visible and high in the sky.

Twenty-nine days before, the constellations Pleiades and Boötes were simultaneously visible at sunset.

They also identified a potential fourth event 33 days before the slaughter. Homer wrote that Hermes, known to the Romans as Mercury, traveled far west to deliver a message and flew all the way back east again. Magnasco and Baikouzis interpreted this to mean that Mercury was high at dawn and near the western edge of its trajectory.

Each of these astronomical events recurs at a different interval, so the precise sequence identified in their reading should be unique.

Using computer analysis, they searched for the sequence between 1250 and 1115 BC, roughly 75 years on either side of the putative date for the fall of Troy.

They found only one sequence, and it coincided with the eclipse of April 16, 1178 BC.

Whether the events of "The Odyssey" occurred or not, the authors are interested, at least, in reopening the debate.

"If we can get a few people to read 'The Odyssey' differently, to look at it and ponder whether there was an actual date inscribed in it, we are happy," Magnasco said.
Posted by Mercury at 3:34 PM

Email ThisBlogThis!Share to TwitterShare to FacebookShare to Pinterest
Labels: "The Odyssey", 4-16-1178 BC, astronomy, Homer, justice