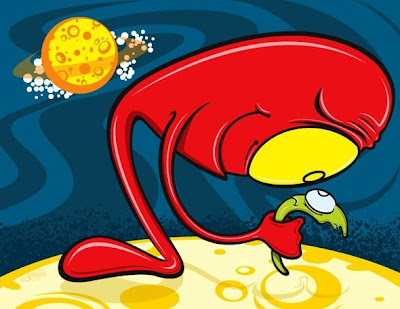 Is this really an issue. Contamination cannot be avoided. Maybe contamination of a foreign environment is not necessarily a bad thing. Is it just a matter of interpretation and perspective. Maybe this is the way the potential of life is spread throughout the universe. There are current hypotheses of life forms reaching Earth from Mars and hitching a ride on comets and meteors smacking into Earth. Such dispersal of foreign life forms is random and accidental and may not be that disastrous by adding new life forms and perhaps life forms that are resistant to indigenous environmental conditions that have prohibited life formation.

"Are We Bringing Our Germs to Mars?"

Time
Star Trek fans know it as the Prime Directive: that there should be no interference with the internal affairs of other civilizations. (Given the frequency with which captains Kirk, Picard, et. al., violate it, however, the Prime Directive seems more like a Prime Suggestion.) Since human beings have yet to explore very far beyond Earth, pondering an interplanetary noninterference policy of our own may seem a little premature — at least until we've mastered warp drives and phasers.

But in fact, such a directive already exists in some form — the international Outer Space Treaty of 1967, which governs the legal framework for activities in space. Best known for banning governments from putting nuclear weapons into orbit, the treaty also requires space-faring nations to avoid "harmful contamination" of other worlds while exploring the solar system. Human beings have yet to set foot on other planets, so the risk today comes from bacteria that can hitch a ride on unmanned spacecraft like NASA's Mars Phoenix Lander, which arrived on the red planet's surface last May.

Even though Phoenix was assembled in a special clean room to minimize bacterial contamination, and its arm, which would have direct contact with Martian ice, was heat-sterilized before launch, it's likely that dozens or more species of microbes hitched a ride on Phoenix's 10-month trip to Mars. Once on Mars, it's possible that bacteria shielded by the structure of the spacecraft from the harsh Martian UV radiation could stay alive, in dormancy, for hundreds of thousands of years. And if native microbes do exist on Mars — nothing has been found yet, but scientists hold out hope that the ice present on parts of the planet harbors life — there's a risk that foreign bacteria could contaminate or somehow change the development of their Martian counterparts. But beyond the broad language of the Outer Space Treaty, we don't really have set guidelines for how we should treat microbial life on another planet should we run across it.

That's why NASA planetary scientist Christopher McKay, in an article in this week's Science, suggests the need for a stronger policy that ensures all exploration of Mars be "biologically reversible" — meaning we would be required to effectively wipe away our footprints and remove any possibility of contamination, by leaving behind nothing that could foster alien microbial growth. Such a policy would be especially necessary if we discover that life on Mars has emerged independently of life on Earth — what McKay calls a "second genesis" — as opposed to Martian life that arose through the exchange of meteorites between Mars and a hospitable Earth, a condition in which the two planets would share a tree of life and contamination would be less of a concern. If there really were a second genesis on Mars, "contamination by even one Earth bacterium may be a serious issue of environmental ethics," McKay writes. We only have to look back at the damage that invasive species have inflicted on virgin territory on our planet, like the infamous cane toads that ravaged Australia, to know what Earth bacteria could do on an alien surface.

For now, it's not difficult to make sure that we avoid squashing new life as we search it out — although doing so could add considerable cost to any space mission. Probes like Phoenix can be more fully sterilized before launch, and debris from any unmanned craft could eventually be recovered. The real challenge will occur if and when humans set foot on Mars or any other planet and begin establishing a more permanent presence, especially if we explore beneath the surface, out of the reach of the sterilizing solar UV radiation. When that day comes, we'll need to step carefully to make sure that native life on Mars — yes, I'm sorry, I have to say it — lives long and prospers.
Posted by Mercury at 7:23 AM