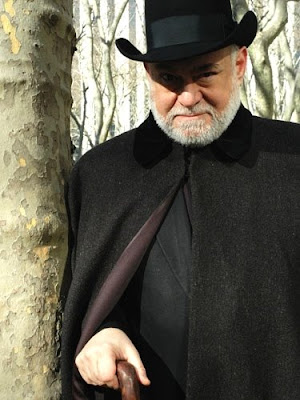 New York Times
In 1953, two sixth graders in Bayside, Queens, became best friends after they discovered their shared passions for Gilbert & Sullivan operas, dinosaurs, the American Museum of Natural History and Charles Darwin. In their pantheon of heroes, Darwin ranked above even Joe DiMaggio. Their classmates, of course, considered them geeks and bestowed appropriate nicknames: Fossilface and Dino.

Officially, he is a science historian named Richard Milner, but he regularly turns into his hero on stage — complete with white beard, bowler and cape — in a one-man musical, "Charles Darwin: Live & In Concert." He does not apologize for this passion today any more than he did on the Queens playground.

"Everyone should find his own Darwin," Mr. Milner says. "The man was so large. He was a zoologist, a botanist, an explorer, a travel writer, a philosopher, an abolitionist, a doting father, a radical intellectual revolutionary with an utterly conservative and blemish-free lifestyle. He revolutionized every field he touched, and he was trained in none of them."

O.K., he was large. Granted, there are many Darwins to find. But until Mr. Milner came along, no one had ever found Darwin the Singing Comedian. There were not a lot of laughs in "On the Origin of Species," and its author said that just the thought of public speaking made him sick to his stomach. He had such bad stage fright that he asked someone else to read his landmark paper to the Linnean Society.

Somehow, though, Mr. Milner has turned the shy naturalist into a suavely bemused performer doing patter songs about trilobites, garfish and tortoise shells.

Even more remarkable, the show is amusing enough to keep generating paying gigs at colleges, museums and conferences around the world. Mr. Milner, who lives in Manhattan, supports himself with the earnings from his shows and his writing, including his forthcoming encyclopedia, "Darwin's Universe: Evolution From A to Z."

"As Darwin himself said, I am a millionaire in odd and useless facts," Mr. Milner said.

In his scholarly work, he has discovered another hidden side of the man: Darwin the Ghostbuster, who secretly helped finance the prosecution of a spiritualist con man being supported legally by Darwin’s scientific rival, Alfred Wallace (who discovered natural selection independently).

But none of this scholarship is as challenging as finding humor in Darwin. The first rule is not to look for the laughs in Darwin's books.

"It's in his letters that you find the warm and sometimes funny Darwin," Mr. Milner said. Darwin recorded some of the foibles of the humans traveling with him on the Beagle, like the ship captain’s attempt to "civilize" the Indians of Tierra del Fuego by educating three of them in England and then returning them to their home.

"Darwin knew it was a ridiculous scheme," Mr. Milner said, "when he saw what supplies English ladies had sent for the group, including fine linens, silver soup tureens and beaver hats. He called it 'the most culpable folly.'" In Mr. Milner's musical version of the story, the captain's dreams ("Savage squaws in gowns and bonnets/Spear-toting natives quoting sonnets") are crushed when one of the Indians casts off foreign clothes and announces his verdict of English living: "It is plain, it's a pain."

After his trip, Darwin procrastinated in writing up his theory, worrying about the reaction from religious leaders. He confided to one friend that proposing the mutability of species would be "like confessing a murder" and had a nightmare of being hanged.

Darwin did not record the details of the nightmare, but Mr. Milner and his co-lyricist, John Woram, imagine it involved a trial on a beach in the Galápagos with an Anglican vicar as judge, prosecutor and jury.

To challenge my fitness, he calls his first witness,

An albatross down from Guiana.

But the bird flicks his tail and turns into a snail,

Then uncoils and becomes an iguana.

The judge is perplexed, and I say, "Don't be vexed,

We've been changing since Adam's arrival.

The monk in his cloister descends from an oyster,

The fittest have mastered survival."
When Darwin did finally unveil his theory, he was too shy to debate it in public, leaving that to his friend Thomas Henry Huxley. Far from being timid about evolution, Huxley's reaction upon reading the theory was, "How extremely stupid not to have thought of that!" Mr. Milner has him singing:

There was an ancient mammal that could hop and leap around,

But with webbing 'twixt his fingers, he could fly right off the ground.

And so this mousy creature evolved into a bat.

Why didn't I think of that?
Mr. Milner's show provides sound bites from Huxley's famous 1860 debate in Oxford against Bishop Samuel Wilberforce, who scornfully asked Huxley whether he was descended from an ape through his grandfather or his grandmother. Huxley had the last word years later, when the bishop died after being thrown headfirst from a horse.

"His end has been all too tragic for his life," Huxley wrote in a letter. "For once, reality and his brains came into contact and the result was fatal."

That line is the most dependable laugh of the show, partly because there are still religious leaders resisting evolution, and partly because it's so much nastier than anything Darwin ever said — or at least anything that Mr. Milner has come up with so far. But he's still looking for that Darwin, too.

Monkey Do: Darwin, the Musical