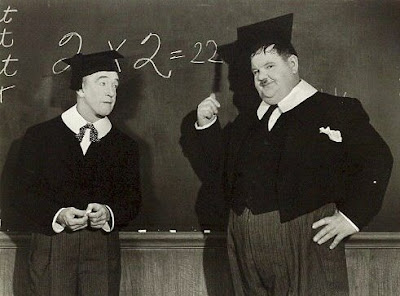 "Well, here's another nice mess you've gotten me into."--Oliver Hardy to Stan Laurel.
What a costly debacle by the Federal Government.

"KC stations to delay DTV switch after all"

The Kansas City Star
Kansas City's television stations will be keeping their analog signals on the air until June 12.

One by one, the stations that told The Kansas City Star on Thursday that they were moving ahead with plans to go all-digital on Feb. 17 — the previous deadline for the digital TV transition — reversed themselves Friday morning.

"It's a PC thing," said KSHB-KMCI general manager Craig Allison, after learning that other stations had decided to honor the new DTV deadline. "No one wants to make the new president mad."

Earlier in the week Congress had passed — at the Obama administration's urging — the DTV Delay Act, which postponed by four months the shutoff of analog transmissions by TV stations, which currently broadcast their signals in analog and digital.

However, the act didn't prevent stations from turning off their analog signals on Feb. 17, and many stations initially indicated that is what they intended to do.

Executives at all four leading TV broadcasters in Kansas City expressed surprise that their corporate leadership had decided to honor the DTV Delay Act and leave analog transmissions on until June 12.

No one is sure when the wind shifted, but it may have been when NBC, ABC, CBS and Fox pledged to honor the extension at their network-owned stations.

Hearst-Argyle Television, the New York-based group that owns KMBC and KCWE, stated Thursday afternoon that the "vast majority" of its stations would keep their analog signals going through June 12.

Once one of the local stations made the decision to hold off, it was inevitable the others would fall in line. Two major ratings periods occur between February and June, and being the sole all-digital station in a ratings book was a risk none of them wanted to take. (KCWE went all-digital in December for technical reasons.)

Frank Barajas, station manager of a smaller TV station, KPXE, said Friday afternoon that corporate management had not decided when it would go to all digital transmissions. Because KPXE’s main station reaches a mostly older audience, Barajas said he and his staff had helped viewers apply for converter box coupons and otherwise escorting them into the digital age.

To receive DTV signals, a TV set needs to be hooked up to cable or satellite, be rated DTV-ready or be connected to a converter box. Nielsen Media Research estimates that 87 percent of Kansas City homes get cable or satellite service and that of the remaining 13 percent, most homes have at least some DTV reception.

"I think broadcasters throughout this whole experience did what they were asked to do, when they asked to do it," said C. Wayne Godsey, general manager of KMBC and KCWE. "Even though we are ready to go on Feb. 17, this will allow for more consumer education, more consumer preparation, and allow the government to fix the coupon program."

Earlier this year, the program that provided $40 discount coupons to households that needed to buy DTV converter boxes ran out of money. A $650 million cash infusion for the program is contained in the economic stimulus package.

One reason the local station managers thought their corporate leadership would adhere to the initial deadline was the relative preparedness of Kansas City viewers for the move to DTV. Nielsen estimates published this week reported that fewer than 4 percent of homes in the area weren't ready.

And even that figure may be inflated.

"Some of those homes that are 'not prepared' have gotten boxes, they just haven't hooked them up; or they have cable and satellite but some other TVs in their homes may not be hooked up to it," said Kent Cornish, executive director of the Kansas Association of Broadcasters.

Stations in Topeka and Wichita planned to stick to the Feb. 17 transition date, Cornish said. One station in Wichita has already gone all-digital. Nearly all stations in Nebraska and Iowa plan to drop analog TV in February as well, citing near-universal viewer readiness figures.

Oddly nothing was mentioned about the totally disorganized PBS affiliate KCPT.


Done deal...analog broadcasting switch on hold
Posted by Mercury at 6:44 AM