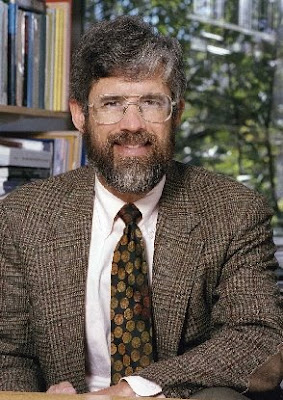 Some thoughts by Robert Koenig about John P. Holdren and the Obama administration.

seedmagazine.com
When Charles M. Vest became president of the Massachusetts Institute of Technology in 1990, one of his predecessors — Jerome Wiesner, the influential former science adviser to President John F. Kennedy — urged him to hire a bright, up-and-coming physicist in Berkeley who was becoming a force in the arena of energy policy.

Like Wiesner, the young energy and natural resources expert at the University of California, Berkeley, had a burning interest in the politics of science, in domestic policy as well as international issues such as arms control. And this month, that former Berkeley scientist — John P. Holdren, now at Harvard University's John F. Kennedy School of Government — will follow in Wiesner's footsteps by becoming White House science adviser to a charismatic president with an agenda for change.

Holdren's new boss, Barack Obama, has cultivated the Kennedy legacy in politics. But the scientific and technological challenges confronting the new administration are more complex than those faced by Wiesner, considered one of the strongest science advisers, during the Kennedy years of the early 1960s. With issues from climate change to stem cell research demanding attention, Holdren and the other members of Obama's science team must weigh in on a series of politically tough decisions that will change the course of US policies at a time when economic recession is likely to limit costly options.

Vest, now president of the National Academy of Engineering and vice chair of the National Research Council, thinks Holdren is up to the challenge because he "offers a great combination of science, engineering, and policy interests and expertise. He brings a lot to the table at a crucial time for this country." His assessment is echoed by many current and former Holdren colleagues, who describe him as an assertive communicator who thinks globally and has a deep knowledge of key energy and environmental issues.

"He is extraordinary," says physicist Neal Lane, who was science adviser during the latter years of Bill Clinton's administration and worked with Holdren on the President's Council of Advisors on Science and Technology (PCAST). "He's got all these issues in his head already — he knows the science and he knows the policy on big issues like energy and climate change," Lane says.

In announcing his choice of Holdren in late December, Obama called him "a physicist renowned for his work on climate and energy" who has been "one of the most passionate and persistent voices of our time about the growing threat of climate change." Both admirers and critics of Holdren — an adviser to former Vice President Al Gore on the issue that won Gore a share of a Nobel Prize — credit him with an unwavering and outspoken viewpoint on climate change issues.

Conservatives such as Jonathan Adler, who directs the Center for Business Law and Regulation at Case Western Reserve University in Cleveland, worry that Holdren's stance on climate change will be inflexible. "The issue is whether science advisers understand where scientific conclusions end and normative policy judgments begin, and I am quite concerned that Holdren does not," Adler says.

Holdren himself was ducking interviews this month before his appointment was confirmed by the Senate. But his supporters, including Vest, contend that Holdren is a fair-minded expert who will make balanced recommendations based on valid science. Both Vest, who served on PCAST during both the Clinton and George W. Bush administrations, and former science adviser Lane say Holdren was a respected intellectual force on the panel from 1994-2001, during which time he led studies on US-Russian cooperation to protect nuclear materials from theft, on fusion energy research, and on this country's energy R&D strategy. Vest says Holdren "did an extraordinarily deep and balanced study" on the energy options study. Lane, now a professor at Rice University in Houston and a senior fellow of the Baker Institute of Public Policy there, told Seed that Holdren "is very assertive but also takes a balanced approach."

In a brief statement last month, the bearded and bespectacled Holdren said science should be essential in policymaking: "None of the great interlinked challenges of our time — the economy, energy, environment, health, security, and the particular vulnerabilities of the poor to shortfalls in all of these — can be solved without insights and advances from the physical sciences, the life sciences, and engineering."

Holdren is well ensconced in the nation's scientific establishment, having served two years ago as president of the American Association for the Advancement of Science (AAAS), the world's largest general scientific society. Like Wiesner, who was a leading voice for decades in international efforts to control and limit nuclear arms, Holdren also has been a persistent arms-control advocate, serving as executive chairman of the Pugwash Conferences on Science and World Affairs, which brings together influential scholars and public figures to discuss ways to lessen the threats of armed conflicts. During Clinton's administration, Holdren also chaired the standing Committee on International Security and Arms Control of the National Academy of Sciences.

At Harvard's Kennedy School, where Holdren is professor of environmental policy and director of the Belfer Center's Science Technology and Public Policy program, he has advocated the development of energy technologies to reduce the risks of climate change and overdependence on oil. He has also sought to improve the process of conveying accurate information about science and technology to decision makers and the public. At the private Woods Hole Research Center, which has no direct link to Harvard, Holdren has led a staff of ecologists, geographers, geochemists, and others to examine the biological links between human activities and global climate change — for example, in monitoring deforestation by using satellite images.

Holdren is an internationalist, working with scientists from Asia, Africa, and elsewhere in the developing world on key issues, including cooperative programs with China and India that support the use of cleaner and more efficient energy technologies. One scientist who knows firsthand how Holdren has dealt with the developing world is Calestous Juma, director of the Belfer Center's Science, Technology, and Globalization Project. "A lot of his work has been building international partnerships," says Juma, whose hometown is not far from Obama's father's village in Kenya. "An important way to solve global problems is to share science and technologies."

One of the missions of the new White House science team will be to strengthen the role of PCAST as an advisory council to Obama. He will have two high-voltage scientists sharing the position of cochairs of the new PCAST: Harold Varmus, president of the Memorial Sloan-Kettering Cancer Center in New York City, and genomics researcher Eric Lander, director of the Broad Institute in Cambridge, MA. "Together, they will work to remake PCAST into a vigorous external advisory council that will shape my thinking on scientific aspects of my policy priorities," said Obama.

While Holdren's scientific expertise is in the physical sciences and engineering, he is married to a biologist and has worked with life scientists on many projects. Richard B. Marchase, a University of Alabama cell biologist who is president of the Federation of American Scientists for Experimental Biology (FASEB), predicts "that the respect for science that has imbued the Obama campaign will make the White House a welcoming place for researchers, and the president's science adviser will enjoy a new position of prominence in the Obama administration."