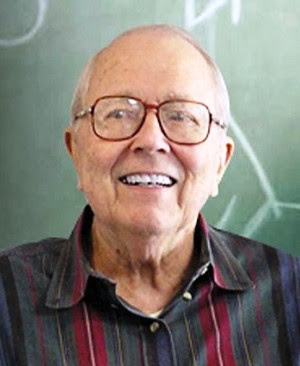 Jack Cover
April 6th, 1920 to February 7th, 2009
"He got the name for the weapon from one of his favorite childhood books, "Tom Swift and His Electric Rifle," one in a popular early 20th century series by Victor Appleton. In the book, the young Swift invents a rifle that shoots bolts of electricity. The story apparently continued to animate Cover's imagination decades later, when he conceived the word "Taser" as an acronym for "Thomas A. Swift Electric Rifle.""

A useful but abused tool of law enforcement.

Cover, who spent most of his career working in the aerospace and defense industries, originally developed the idea for the Taser in the 1960s. But it didn't really take off until the 1990s.

Los Angeles Times
Jack Cover, an aerospace scientist who invented the Taser stun gun -- a device used by thousands of law enforcement agencies to subdue unruly offenders with electrical shocks -- has died. He was 88.

Cover had Alzheimer's disease and died of pneumonia Saturday at the Golden West Retirement Home in Mission Viejo, said his wife, Ginny.

Trained as a nuclear physicist, Cover spent most of his career working in aerospace and defense industries. He was a chief scientist for North American Aviation (later Rockwell International) and helped the firm become a primary NASA contractor on the Apollo moon landing program in the early 1960s.

He also was a born inventor who in the 1940s already was building gadgets, including cooked-food testers, voice- activated switches and an electric toothbrush. One of his last brainstorms was an alternative-energy generator.

But the Taser was his most successful invention, credited with preventing deadly police encounters and spurring improvements in the tactics used to take violent offenders into custody.

"Jack is an unsung hero. He did something great for the world, saved a lot of lives and prevented a lot of injuries," said Greg Meyer, a retired police captain who was heading the Los Angeles Police Department's nonlethal weapons research when he met Cover 30 years ago.

The Taser also has its share of critics, who have linked the device to scores of deaths in recent years, including two Orange County jail inmates last year. The American Civil Liberties Union is pressing to have Tasers classified as lethal weapons, but experts disagree on whether the stun guns directly caused the deaths.

Despite the continuing debate, the Taser has come into widespread use, adopted by more than 13,000 military and law enforcement agencies around the world, including the LAPD, which worked closely with Cover to test the device in the 1980s.

According to Meyer, Cover began to develop the Taser in the 1960s in response to a rash of airplane hijackings. Sky marshals carrying sidearms began riding on commercial airliners to discourage hijackers, but Cover saw the risk inherent in the situation. If a bullet missed the hijacker and pierced the fuselage instead, the plane could go down.

"He said, 'Let me figure out something better than shooting people that might crash the plane,' " Meyer said.

Cover told the Orange County Register in 1991 that he got the idea for the Taser after hearing about a man who was briefly immobilized by a fallen power line. He began tinkering in his garage and in the late 1960s came up with a device that looked something like a flashlight but fired darts that delivered an electrical charge. The darts could hit a target up to 15 feet away.

He got the name for the weapon from one of his favorite childhood books, "Tom Swift and His Electric Rifle," one in a popular early 20th century series by Victor Appleton. In the book, the young Swift invents a rifle that shoots bolts of electricity. The story apparently continued to animate Cover's imagination decades later, when he conceived the word "Taser" as an acronym for "Thomas A. Swift Electric Rifle." (Cover evidently added the middle initial "A," which does not appear in the books.)

Cover was born in New York City on April 6, 1920, and grew up in Chicago. He earned a bachelor's degree and a doctorate in physics at the University of Chicago, where his professors included Enrico Fermi and Edward Teller, the renowned atomic scientists.

During World War II, he was an Army Air Forces test pilot. After the war, he spent several years at the Inyokern Naval Ordnance Test Station at China Lake, Calif. He was a scientist at North American Aviation from 1952 until 1964 and later worked for IBM and Hughes.

In 1970, he formed Taser Systems Inc., believing that his invention of a weapon that could stun but not kill an assailant would have wide appeal. But because the Taser used gunpowder to launch the darts, the federal government considered it a firearm, a classification that ruled out a civilian market and also discouraged police and military sales.

The LAPD had rejected the Taser twice during the 1970s, Meyer recalled, but reconsidered in 1979 after the controversy involving Eula Love, a South Los Angeles woman who was shot to death by LAPD officers in a confrontation over an unpaid gas bill. As a result of field tests with the LAPD in 1980, Cover won department approval with an 11-watt Taser that proved more effective than his initial 7-watt model, Meyer said. But sales remained limited and the business collapsed.

In 1993, two Arizona brothers, Tom and Rick Smith, contacted the then-73-year-old Cover about retooling the Taser as a nonlethal self-protection device that could legally be sold to civilians.

"Jack was very dedicated to the mission," Tom Smith, co-founder and chairman of Taser International in Scottsdale, Ariz., said this week. "He had a true belief in where this technology was going to go."

In 1994, the Smiths' company launched the Air Taser, based on Cover's proposal to change the propulsion system from gunpowder to compressed air. Among projectile stun guns, the Smiths' devices are the most widely sold in the world, used by police and military agencies in 45 countries. In addition, more than 180,000 Tasers have been sold to private citizens, according to a company spokesman.

Cover was cremated, and there are no immediate plans for a memorial service. In addition to his wife, of San Clemente, he is survived by four children, two stepchildren, 10 grandchildren and five great-grandchildren.
Posted by Mercury at 5:12 AM