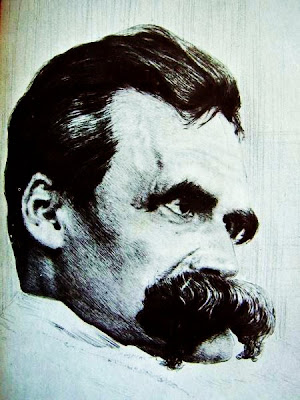 Some blogging thoughts on Friedrich Nietzsche and physics by physicist Kip Thorne.

Discover
Henri Poincaré proved his "recurrence theorem" in 1890: in a mechanical system with bound orbits (particles can't just run off to infinity), any state through which the system passes will be approached (to arbitrary accuracy) an infinite number of times in the future. That was eight years after Friedrich Nietzsche, in The Gay Science, asked us to imagine exactly such a scenario, in his notion of eternal return:

What if, some day or night, a demon were to steal after you in your loneliest loneliness and say to you: "This life as you now live it and have lived it, you will have to live once more and innumerable times more; and there will be nothing new in it, but every pain and every joy and every thought and sigh and everything unutterably small or great in your life will have to return to you, all in the same succession and sequence—even this spider and this moonlight between the trees, and even this moment and I myself. The eternal hourglass of existence is turned upside down again and again—and you with it, speck of dust!"
This is the kind of thing you come across when you're writing a book about time. Nietzsche wanted to suggest that a well-lived life was one you wouldn't mind knowing would recur throughout eternity, while the prospect would cause gnashing of teeth for most of us. Poincaré's concerns were somewhat different.

While looking up this passage, I stumbled across one of my favorite Nietzsche quotes, just a few aphorisms prior:

Yes, my friends, regarding all the moral chatter of some about others it is time to feel nauseous! Sitting in moral judgment should offend our taste! Let us leave such chatter and such bad taste to those who have nothing else to do but drag the past a few steps further through time and who never live in the present,—which is to say the many, the great majority! We, however, want to become who we are,—the new, unique, incomparable ones, who give themselves their own laws, who create themselves! And to that end we must become the best learners and discoverers of everything that is lawful and necessary in the world: we must become physicists in order to be able to be creators in this sense,—while hitherto all valuations and ideals have been based on ignorance of physics or were constructed so as to contradict it. Therefore: long live physics! And even more so that which compels us to turn to physics,—our honesty!
A quote which engenders, as you might imagine, swift elaborations on the part of Nietzsche scholars that he certainly wasn't talking about what we ordinarily mean by "physics." But I’m not so sure. The substance of physics (experimental results, theoretical understandings) is of no help whatsoever in leading a moral life. But the method of physics — open-minded hypothesis testing and scrupulous honesty in confronting what Nature has to tell us — is a pretty good model for other aspects of our lives.

Not that physicists are, as a matter of empirical fact, any better at being good human beings on average than anyone else. Even we physicists could learn to be better physicists.
Posted by Mercury at 8:48 AM

A beautiful and unjustly maligned thinker. Wonderful quotes from a subtle and unique mind.