100s of analog signals are severed 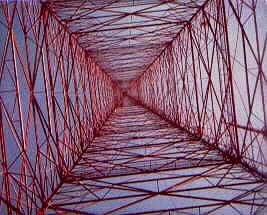 And so chaos and frustration begins.

Associated Press
About a quarter of the nation's TV stations cut off their analog signals Tuesday, causing sets to go dark in households that were not prepared for digital television despite two years of warnings about the transition.

Though most viewers were ready - and people with cable or satellite service were unaffected - some stations and call centers reported a steady stream of questions from frustrated callers. Many wondered how to get coupons for converter boxes that translate digital signals for older TVs - or how to get the devices working.

"It's kind of an irritation, but I understand that everyone will have a much better picture. As far as I was concerned, they could have left things the way they were," said Dorothy Delegard, 67, of Minneapolis, who bought a converter box because a friend gave her a coupon that expires Tuesday.

Phones were ringing off the hook at a walk-in information center set up by stations in Providence, R.I.

A volunteer at the center, Jeremy Taylor, said he tried to calm agitated callers and explain the reasons for the disappearance of analog signals, which have remained largely unchanged since the 1950s.

"I try to explain that the digital switch is not something we're doing to extort them of money," Taylor said.

The federal government mandated the end of analog broadcasts to make room on those frequencies for wireless Internet service, emergency radio traffic and other uses. Digital TV broadcasts, which began several years ago, take up much less of the wireless spectrum.

Originally, all U.S. stations were to cut their analog signals on Tuesday, but at the urging of the Obama administration, Congress voted this month to give broadcasters more time.

Most stations, particularly those in big cities, accepted the offer to wait until June 12. Others wanted to stick to Feb. 17, a date they had spent much airtime advertising. Many of them had also booked engineering work on their antennas for that day.

The Federal Communications Commission, which wanted to ensure that no one would be entirely deprived of analog signals, cleared 421 stations to go all-digital this week. Another 220 stations have already made the switch, including all stations in Hawaii.

In most cases, one station in each of those markets will continue sending analog signals until June or will offer a so-called "analog nightlight" for a few months, with limited local news and emergency broadcasts, as well as information about the digital TV transition.

The back-and-forth over the cutoff date threw both TV stations and viewers for a loop.

Jeff Long, manager of WHKY-TV, an independent station in Hickory, N.C., said the company's analog shutdown went smoothly on Saturday, but some viewers complained that they thought it had been postponed until June 12.

RadioShack Corp. circulars in newspapers this weekend had the opposite message, saying Feb. 17 was still the date for the end of analog TV. Spokeswoman Mary Delagarza said the fliers had been prepared two months in advance and could not be pulled.

Congress delayed the cutoff in large part because the fund that pays for $40 converter-box coupons had reached its spending limit. Coupons are now being issued only as fast as old ones expire unused.

The stimulus bill that President Barack Obama signed Tuesday contains $650 million in additional funding. Once that money becomes available, it can clear the backlog of 4 million coupons in a few weeks. Without a coupon, a converter box costs $45 to $80.

Joe Glynn, vice president of engineering at PBS affiliate WVIA-TV near Scranton, Pa., said the station got a dozen calls in the past two days about its planned changeover at 11:59 p.m. Tuesday. The converter boxes have been a frequent subject.

He said most callers acknowledge that they only have themselves to blame for procrastinating.

"Everybody admits it's their fault. They knew it was coming," he said. "Some people seemed to be mad at themselves for not doing something sooner."

Even converter boxes that are correctly installed may drop some channels. That's because apart from killing analog, many stations are also changing to new digital frequencies. Viewers who were already watching the digital signal, either through a converter box or a digital TV set, will lose the channel until they force the device to "rescan" the airwaves.

In addition, many households will find that they need new antennas. Digital signals generally come in better than analog ones, but they are not received well by some older antennas. Spokeswoman Lea Sloan at PBS said that a rising number of calls to member stations are from people who are getting digital signals, but not all the ones they want.


Analog broadcasting signals will cease for some

Junk televisions and recycling
Posted by Mercury at 1:32 PM