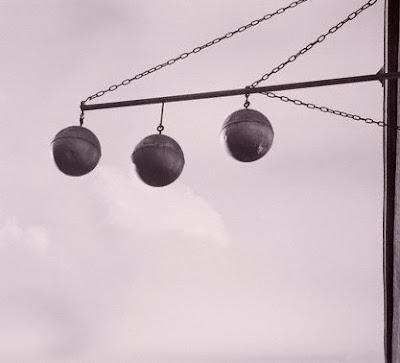 I cite the following to illustrate, despite the current hard times felt by everyone, that the value of diamond jewelry items are highly inflated.

"Kathryn Snell, who placed an ad on the Craigslist wedding ring page, says she has no qualms about offering her $13,000, 2-carat platinum wedding ring set to anyone willing to meet her $6,000 asking price." I doubt that her asking price will be met.

"Pawnshops see an uptick in the broke and the broken-hearted"

USA TODAY
"Baby on the way, must go asap," reads an ad on the Nashville Craigslist website, offering up a wedding ring set from a short-lived marriage.

"A divorce for me … means cheap jewelry for you," another ad promises, offering a wedding and engagement ring set for $700.

As people face today's struggling economy, any sentimental value a ring may have is increasingly being weighed against the real-world value of diamonds and gold that's selling for $978.20 a troy ounce on the New York Mercantile Exchange.

There is a brisk business for rings, both online and at pawnshops and gold dealers, industry members say.

Sometimes, the stories are emotional. Mike Mouret, owner of Nashville Coin and Currency, recalls a customer who pawned a wedding ring to collect enough cash to cover the light bill.

Lou Tansky, owner of Uncle Ben's Pawn Shop in Cleveland, says he recently bought a bridal set from a woman who was going through a divorce. Though her marriage was ending, Tansky says, she was reluctant to give up a symbol of better times.

The woman didn't fit the mold of his typical customers, he says. She was well-dressed and seemed well-to-do.

"We are seeing much more of that, and we are seeing it from a part of the population that would not be part of our regular clientele," Tansky says. "Now they find themselves in a position that they're not used to. It's a very emotional thing for people to have to deal with."

Tansky, who is also president of the Ohio Pawnbrokers Association, says he probably takes in a dozen wedding or engagement rings a day. He says other shop owners he talks to have had similar experiences.

"I think a lot of it has to do with the price of gold and the economy being so bad," says Brian Smith, who owns six pawnshops in central Mississippi. A ring that might have brought $40 in his shop five years ago can now bring $100 or more.

Rick Moore, owner of Nashville Diamond Bankers, says he is doing a lot of business these days with out-of-work contractors and affluent families who need extra cash.

"People hate to sell Grandma's wedding ring. But they don't mind selling their mother-in-law's," Moore says. "If you've got a kid in college and tuition's due, it's much better to sell a piece of jewelry than try to sell off some stock. You can always buy another piece."

Kathryn Snell, who placed an ad on the Craigslist wedding ring page, says she has no qualms about offering her $13,000, 2-carat platinum wedding ring set to anyone willing to meet her $6,000 asking price.

"I'm simply a woman who had a very short-lived marriage and prefers this gorgeous ring on someone who will enjoy it rather than let it sit in a jewelry box unused," she wrote in her detailed ad.

She's in a new relationship now, Snell says, and the ring was just a last little reminder of an unhappy chapter in her life.

"Right now, as we all know, the economy isn't doing very well," she says. "It's better to sell it than just leave it sitting in a drawer."


Diamond market...a manipulated business
Posted by Mercury at 6:02 AM