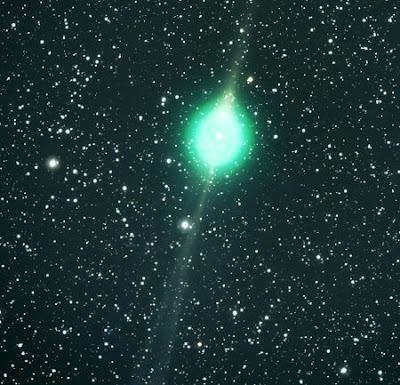 Amateur astronomer Jack Newton took this photograph of Comet Lulin.
I don't normally mention specific astronomy events to witness, but this is spectacular and fits well into this year's celebration of astronomy...the observation of a visitor in our solar system--Comet Lulin. Spectacular...yes, the brilliant "green" color of vaporized cyanogen and carbon. [Frankly, when I first saw the photograph, I thought it was a product of vaporized copper.]

NASA
In 1996, a 7-year-old boy in China bent over the eyepiece of a small telescope and saw something that would change his life--a comet of flamboyant beauty, bright and puffy with an active tail. At first he thought he himself had discovered it, but no, he learned, two men named "Hale" and "Bopp" had beat him to it. Mastering his disappointment, young Quanzhi Ye resolved to find his own comet one day.

And one day, he did.

Fast forward to a summer afternoon in July 2007. Ye, now 19 years old and a student of meteorology at China's Sun Yat-sen University, bent over his desk to stare at a black-and-white star field. The photo was taken nights before by Taiwanese astronomer Chi Sheng Lin on "sky patrol" at the Lulin Observatory. Ye's finger moved from point to point--and stopped. One of the stars was not a star, it was a comet, and this time Ye saw it first.

Comet Lulin, named after the observatory in Taiwan where the discovery-photo was taken, is now approaching Earth. "It is a green beauty that could become visible to the naked eye any day now," says Ye.

The comet makes its closest approach to Earth (0.41 AU) on Feb. 24, 2009. Current estimates peg the maximum brightness at 4th or 5th magnitude, which means dark country skies would be required to see it. No one can say for sure, however, because this appears to be Lulin's first visit to the inner solar system and its first exposure to intense sunlight. Surprises are possible.

Lulin's green color comes from the gases that make up its Jupiter-sized atmosphere. Jets spewing from the comet's nucleus contain cyanogen (CN: a poisonous gas found in many comets) and diatomic carbon (C2). Both substances glow green when illuminated by sunlight in the near-vacuum of space.

In 1910, many people panicked when astronomers revealed Earth would pass through the cyanogen-rich tail of Comet Halley. False alarm: The wispy tail of the comet couldn't penetrate Earth's dense atmosphere; even it if had penetrated, there wasn't enough cyanogen to cause real trouble. Comet Lulin will cause even less trouble than Halley did. At closest approach in late February, Lulin will stop 38 million miles short of Earth, utterly harmless.

To see Comet Lulin with your own eyes, set your alarm for 3 am. The comet rises a few hours before the sun and may be found about 1/3rd of the way up the southern sky before dawn. Here are some dates when it is especially easy to find:

Feb. 6th: Comet Lulin glides by Zubenelgenubi, a double star at the fulcrum of Libra's scales. Zubenelgenubi is not only fun to say (zuBEN-el-JA-newbee), but also a handy guide. You can see Zubenelgenubi with your unaided eye (it is about as bright as stars in the Big Dipper); binoculars pointed at the binary star reveal Comet Lulin in beautiful proximity.

Feb. 16th: Comet Lulin passes Spica in the constellation Virgo. Spica is a star of first magnitude and a guidepost even city astronomers cannot miss. A finderscope pointed at Spica will capture Comet Lulin in the field of view, centering the optics within a nudge of both objects.

Feb. 24th: Closest approach! On this special morning, Lulin will lie just a few degrees from Saturn in the constellation Leo. Saturn is obvious to the unaided eye, and Lulin could be as well. If this doesn't draw you out of bed, nothing will. [sky map]

Ye notes that Comet Lulin is remarkable not only for its rare beauty, but also for its rare manner of discovery. "This is a 'comet of collaboration' between Taiwanese and Chinese astronomers," he says. "The discovery could not have been made without a contribution from both sides of the Strait that separates our countries. Chi Sheng Lin and other members of the Lulin Observatory staff enabled me to get the images I wanted, while I analyzed the data and found the comet."

Somewhere this month, Ye imagines, another youngster will bend over an eyepiece, see Comet Lulin, and feel the same thrill he did gazing at Comet Hale-Bopp in 1996. And who knows where that might lead...?

"I hope that my experience might inspire other young people to pursue the same starry dreams as myself," says Ye.
Posted by Mercury at 7:45 AM