Andrea Attili's thoughts on his "Persistence in Kerr Metrics" video 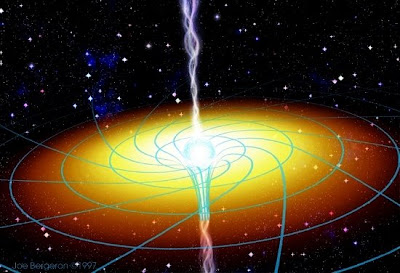 The idea was to represent the concept of "memory" and of "time" like a sort of "space of memory", similar to the definition of "inner-space" by the writer J.G. Ballard, a place in which associative processes take place.

Even if I am a PhD in physics, I am not really in the field of General Relativity. However I was intrigued by some aspects of the Kerr's solution of the Einstein's field equations. For example, the fact that it predicts the existence of a region that contains closed "timelike" curves, which are very puzzling since they violates causality (future and past are linked together with a ring structure). Furthermore the black hole singularity in the Kerr solution is "timelike" and it is not a point in space but a "ring" in time. The purely temporal metric component is negative too (i.e. acts like a purely spatial component), this results in the phenomenon of "frame dragging", i.e. it is not the object that is moving (rotating), but the space-time itself.

Though the physics equations are clear and well defined, it is very difficult to have an intuitive vision of such conditions. However my thoughts about the nature of time bring me to find some analogies suited for describing this hypothetical "space of memory", where time itself is completely deconstructed (it is possible to look through time, inside time, outside time, at the side of time, ...). These analogies are of course nothing of scientific, but only an artistic/poetic expedient.

The video is cyclic, representing the ring structure in which it is not possible to define an absolute future or past. There is no linear sequence of events. The basic idea of the video is that it is up to the viewer to build, through the use of free association and personal insight, a meaning or an history of what he/she is actually watching. For this reason I have put in the video several conceptual, symbolic images: the stairs, the hands, the hourglass, the clock, the wall, etc. I used also some not well defined, ambiguous images to further stimulate free association processes. The resulting impression should be a non-sequential, multi-dimensional history.

The superposition of different images is realized through the use of non-linear time-dependent functions. The whole animation is created by a sort of auto-generating process. First I created a set of still images. A sub-set of these images is then randomly chosen, each image of the subset is multiplied by an unique defined function and then superimposed. These functions are "generated": their general form is already defined, but their actual realization depends also on parameter randomly chosen. From this subset a segment of animation lasting about few seconds is created. The process is repeated in order to obtain several segments and then mounted together for the final video.

[I studied physics at the university and obtained a Ph.D. in 2003. In the last years I worked in academic research, in different fields (not only of physics): condensed matter physics, computational physics, bioinformatics, medical physics. At present I am working in hadron-therapy (treatment of radio-resistent tumor with hadrons, i.e. protons, and other nuclei).

In parallel to my professional life I pursued several interests related to visual arts and computer-generated graphics (I also studied for two years architecture, but then I quit). I collaborated occasionally with an Italian magazine of arts, to which I have sent some of my works. I also regularly paint and draw (my house is full of my paintings, that I however never published on internet, but that maybe I will do somewhere in the future, when I will have time).

As you can see, I was always contended by to different aspect of me: one related to pure science and rational thinking, the other related to my visual and "artistic" fantasies. I can say that when I reason about scientific "abstract" concept, I tend always to visualize them. It is my way to be effective in managing and crafting science.--Andrea Attili.]

"Persistence in Kerr Metrics"--Andrea Attili
Posted by Mercury at 7:09 AM

All of my life I have worked with the arts and sciences especially in the realm of obsolete photographic processes [argentotypes, cyanotypes, bromoils, carbon prints, gum-bichromates, etc.] and have posed a question to artists: Do finished pieces of art mandate a "title" and do such "titles" influence the meaning of a piece of art or could the piece of art stand alone. And to complicate matters, specifically in your video presentation, does the addition of a music bed do the same thing. Would I experience differently "Persistence in Kerr Metrics" if the title was different, no title, different music bed, or no music?

I agree that a "title" can actually influence the meaning of a piece. It is part of the artistic construct. The same can be said for the audio/musical comment of a video.

The choice of the music in my case was done after the video was mainly completed. I tried different kind of music to see which one will fit best for what I had in mind. I can say that different musics (silence included) bring different perceptions of the opera. It is like observing the same object from different points of view.

The whole concept of aesthetics is quite rich in the diversity of interpretation and sometimes quite complex. I remember one of my undergraduate courses with the wonderful existentialist Dr. Hans Uffelmann. For four months we studied the history of various aesthetic movements. Near the end of the course he stated that aesthetics was actually a matter of "taste" upon which some smart ass undergraduate, me, replied with this..."Yes, "taste"...good "taste" and bad "taste"". Back to square one.

I often wonder why artists have to "tell" the viewer what the artist was really feeling during the time period when an art item was being created. Sometimes I think...who cares. A little insight is fine but one doesn't needs to know everything. I can recall a zillion years ago at a mall art exhibit when I collared an artist who used a large sheet of paper and one new ball point pen. He started to draw and related everything he was thinking and feeling as he created. I was watching and listening. His work was good but I learned more about him than I really wanted to know. He did not stop until the ink pen ran dry. Was his commentary too much? Maybe. It was for me and I feel such information severely interfered in my appreciation of his work,especially when he began to discuss his philosophy which was a mash of in-vogue philosophical thinking and not entirely correct.