Comet Lulin is getting closer

COMET LULIN UPDATE: Comet Lulin is approaching Earth and brightening rapidly. Observers say it is now visible to the naked eye as a faint (magnitude +5.6) gassy patch in the constellation Virgo before dawn. Even city dwellers have seen it. Backyard telescopes reveal a vivid green comet in obvious motion. Just yesterday, amateur astronomers watched as a solar wind gust tore away part of the comet's tail, the second time this month such a thing has happened. Lulin's closest approach to Earth (38 million miles) is on Feb. 24th; at that time the comet could be two or three times brighter than it is now. Browse the gallery for the latest images: Spaceweather.com . 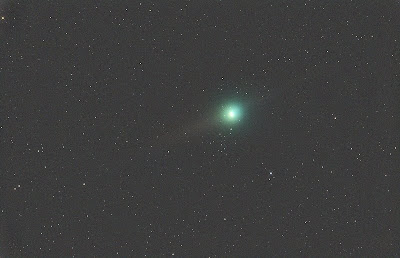