"The Ark of the Covenant"..."Baghdad Battery"--similar in physics and intent? Well, maybe. Probably more for religious significance and crowd control. Great mystery and controversy surround both of these items. 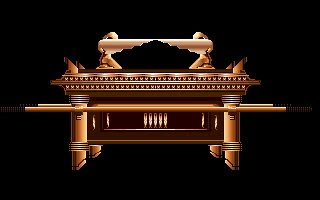 The "The Ark of the Covenant"
ca. 2,000 B.C.
It has been described as being two cubits and a half in length, a cubit and a half in breadth, and a cubit and a half in height. [A cubit has been determined to be about 18 inches; thus, the Ark would be roughly 45 inches x 27 inches x 27 inches]. It is made from wood from the acacia [setim] tree--the tree from which "gum arabic" is extracted. It has durability similar to cypress--tough stuff. It was lined in pure gold sheets inside and outside with a gold rim. On each upper corner were rings through which gold covered wood [acacia] poles were inserted for carrying the Ark. And the cover [the "propitiatory"] was also made of gold adorned with two cherubim with spread wings. The contents: Perhaps filled with religious artifacts such as Aaron's rod and/or the broken and whole tablets from God via Moses. Neither the religious contents nor the long history of the Ark's exchange of ownership and whereabouts is relevant here. The mythology continues by stating that if the Ark were touched one would die: Such were the fates of Aaron's sons Nadav and Avihu, priests and citizens of the Philistines, Uzzah [he who attempted to stabilize the Ark when it was about to tip over in transit]--the curious. The Ark always proceeded military campaigns and tribe movements. It was at Jericho too. When the Ark was present the Hebrews won. Nevertheless, some recent scholarship has intimated that this may well be the first contact man had with electricity--static electricity. The conditions were there: A fine electrical conductor [gold] and a very warm and arid climate. Blend in some sheep skin and one may be able to produce a ZAP or two--enough to convince the populace and build better stories.

And in 1981 Stephen Speilberg had fun with it. 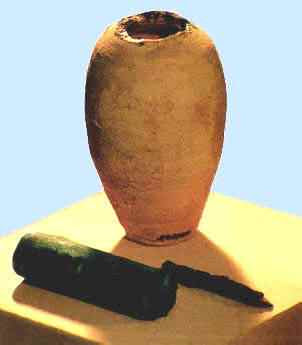 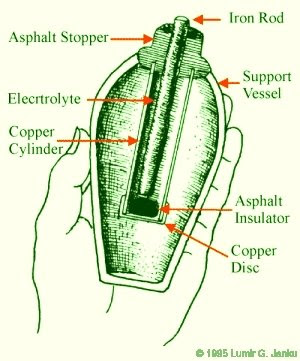 The "Baghdad Battery"
ca. 250 B.C.
The story is thus. Dr. Wilhelm Konig [an archaeologist] in 1938 was looking around in the basement of the Baghdad Museum and discovered a small amphora like object about 6 inches in length. It had a copper cylinder inside with soldering marks using lead and tin.. Further investigations revealed many copper vases [ca. 2, 500 B. C.] with a blue silver film electroplated to the copper. Some experimentation had been performed and squeezed 0.8 to 2 volts of current. Exact technicians and purpose are unknown but they may well have been similar in function as stated above regarding the Ark--religious matters and some fancy razzle dazzle to awe the populace and reinforce the priestly powers.