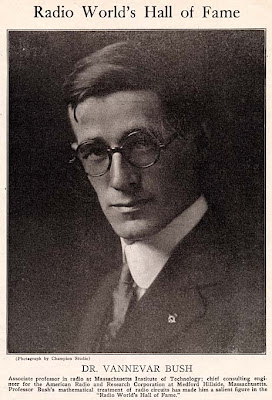 "The demonstration that no possible combination of known substances, known forms of machinery and known forms of force, can be united in a practical machine by which man shall fly long distances through the air, seems to the writer as complete as it is possible for the demonstration of any physical fact to be."--Simon Newcomb [astronomer].
"This foolish idea of shooting at the moon is an example of the absurd length which vicious specialization will carry scientists working in thought-tight compartments. For a projectile entirely to escape the gravitation of the earth, it needs a velocity of seven miles a second. The thermal energy of a gramme at this speed is 15,180 calories.... The energy of our most violent explosive-nitroglycerin-is less than 1500 calories per gramme. Consequently, even had the explosive nothing to carry, it has only 1/10 of the energy necessary to escape the earth...... Hence the proposition appears to be basically impossible....."--A. W. Bickerton
Dr.Vannevar Bush, the science advisor to Winston Churchill told this to Winston Churchill shortly before Germany began launching V-2s: " There has been a great deal said about a 3000 mile high angle rocket. In my opinion such a thing is impossible for many years...... I say, technically, I don't think anyone in the world knows how to do such a thing and I feel confident that it will not be done for a very long period of time..... I think we can leave that out of our thinking. I wish the American public would leave that out of their thinking."

To be sure there is considerable confusion and misunderstanding when it comes to scientific models and predictions but I must admit that most of the predictions have a predilection towards the technological and personal especially if it affects mankind somehow. The oldest case I can recall is the often (mis)quoted and misused Nostradamus. Furthermore, there is a huge difference between "prophecy" and true scientific "prediction". The former hinges on a lot of guessing [some educated]--way too much subjectivity. The latter is more soundly based and is still subject to errors but not as grand as the prophesiers. And I suppose there are those that fall in between such as the science fiction writer Jules Verne: The Nautilus and individual diver's underwater breathing apparatus. [Interesting to note that there were predecessors to Verne...notably, Cornelius van Drebbel and David Bushnell with limited submarine experimentation.]

Through Alpha-Plus Bernard Marx, Huxley's protagonist of Brave New World, and the environment of the future we see an upside down world of science--a very black comedy [as is Fritz Lang's Metropolis and George Orwell's Animal Farm and 1984] far from the representation provided by the likes of authors Jules Verne or H. G. Wells or director William Cameron Menzies's Things To Come who provided literary and skillful cinematic predictions of grand and spectacular things. The Era of "Ford" for Huxley has dissolved the arts, religions, strife: Life is long and without want or pain. Anxiety is but a "soma" tablet away. This is dark and void of freedom and spontaneity--awe and mystery. This is not a prediction of "what will be", but more of a "what could be". Huxley's Island [1962] and After Many A Summer Dies The Swan [1939] explore the same concepts. The point is that there must be a clear distinction between genuine predictions and prophesy. And, I am not at all sure there are any "hazards"--and for whom?

This prophecy/prediction issue is quite an annoyance. Such obfuscation is rampant. The prophecy characteristics should remain for the religious and literary for personal guidance and entertainment and leave the predictions to the scientific community employing the rigors of scientific methodology. Genuine predictions are based on repeated reoccurring evidence and extrapolation of the same. It is sound reasoning far beyond Biblical statements and chaotic rhetoric from a Nostradamus or Edgar Cassey. We tend to remember the hits not the misses and the hits are mostly coincidence or serendipity. I suppose statistically, they are bound to have a hit now and then but on the whole the prophecies fail. Now granted there are powerful insights and may well prove accurate and stand a good chance of being correct, but when one deals with human issues unpredictability rules. Aldous Huxley was wrong about the horrors of a restricted society being implemented by 1984. 1984 came and went and nothing that restrictive was in vogue. However, just look at 2008: Government control is tighter than ever before; cameras showing up at establishments of commerce, city streets, and highways; antidepressants ["Soma"] are invasive; social stratification is changing. Human activity is difficult to monitor and predict let alone predict future historical events. The steady and reliable tools of science allow statistically accurate predictions.

The most current example are the two new planets discovered by Paul Butler and Geoffrey Marcy [Carnegie Institute], and Barbara McArthur [University of Texas]: One around an M dwarf star called Gliese 436 and the other around star 55 Cancri. Both planets are short and rapid orbiters and were discovered by using the "radial velocity" [Doppler] technique in which a planet's gravitational tug is detected by the wobble it produces in the parent star. Such planets are considered less gaseous as distant planets like our Jupiter and Saturn and purport heavier more rocky inner as the extreme outer planets thus, these planets are Neptune-like in mass in composition. But it is interesting to note that some dissenters regarding the origin of these planets and similar ones claim that they are a product of "planet migration" and not naturally formed in one orbital position. The point is that such predictions for Earth-like planets in the universe is strong and strong enough for NASA and ESA to develop technology and spend the bucks to provide probes to study the same: Kepler observatory [2007] and COROT [2006]. The point here is that "prophecies" should stay in the realm for personal belief or for purely entertainment purposes and that "predictions" reside in the realm of science and the rules that govern science. Granted, there will be gray areas for predictions such as the ominous insight of an Aldous Huxley or George Orwell.

Perhaps some definitions and understanding be made and new examples provided. I usually associate prophecy with religious or mythical associations--or those that want to make a few bucks selling books and newsprint predicting what movie personalities will marry whom or when the aliens will arrive. Biblical prophecies abound to this day. Literature/myth gave us the prophecy from the likes of the Oracle at Delphi for Oedipus [tragically] and the witches in Shakespeare's Macbeth warning Macbeth in part of the movement of Birnam Wood [Malcolm's army using branches from Birnam Wood as camouflage]. I would suggest that future scientific statements are predictions [minus the religious/mythical] based on some very good guesses and thus shouldn't be called "prophecies". I well remember my 5th grade teacher [the 50's] who was not a scientist but well educated and an ardent believer in the future of atomic energy predicted that automobiles would run on atomic fuel the size of a marble. Well, many years later it hasn't happened but it could still be possible. That's a "prediction" not a "prophesy". "Predictions" are postulated on current knowledge, logic, models, and some insight in regards to history, sociology, and psychology.